Emmanuelle Fahey is an international student currently finishing a Master’s in Public Policy and Public Administration at Concordia University. Her policy work interests include issues related to gender justice and climate change mitigation with a focus on refugee and migrant populations.  Before moving to Montreal for graduate school, she managed a grant program for the International Rescue Committee, where she networked with local businesses to provide employment opportunities for Tucson’s refugee community.  Her career goals include working as a policy analyst in the field of feminist policy and migrant rights at a community level. She is excited to learn more about the relevant international actors shaping the field of human rights through her work at MIGS. 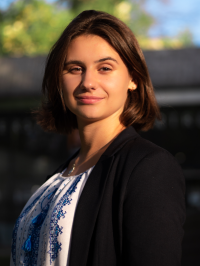 Janick Houde graduated from Laval University with a bachelor degree in Public Affairs and International Relations. She is currently enrolled in a graduate program in Information Technology Law at University of Montreal. She has always been interested in international relations and more specifically international conflicts, while also having interest in human rights and enforcing peace by international cooperation. In her graduate program, she would like to study the impact of new information technologies on human rights, while focusing on the legislation surrounding the protection of private data. Janick intends to pursue a career as a policy analyst in the field of data protection and human rights. She’s looking forward to join the team and learn more about the different actors relevant to the field.

Maria-Ruxandra Lefter is a graduate of the Dual Bachelor’s degree between the University of British Columbia and Sciences Po Paris. After completing her first degree in Social Sciences at the historical Euro-American campus of Reims, she double-majored at UBC in Political Science and International Relations. She is currently enrolled in the Dual Master’s degree in Intelligence and International Security at Sciences Po Paris and King’s College London, with a focus on Russia and Global Risk. She speaks Romanian, French, English, Spanish and is learning Russian.

Maria-Ruxandra is interested in Canada’s international security cooperation and defence policies in regards to its Eastern European allies and the Russian threat. She has also always been fascinated by the role of Artificial Intelligence as both a new threat to international security as well as a tool of prevention of Crimes Against Humanity. In the past, Maria was a Parliamentary Intern for Member of Parliament Guy Caron, Foreign Affairs Critics for the New Democratic Party of Canada; as well as organized two large-scale conferences as the University of British Columbia, one on the state of Eastern European countries 30 years after the fall of the Berlin Wall, and one on Canadian-European Union relations.

In the future, Maria hopes to join Global Affairs Canada as a diplomat and join the civilian branch of NATO in its missions in Eastern Europe.

Sergio Snabian is a graduate of the University of Toronto’s International Relations program and currently enrolled in the Hertie School of Governance in Berlin for a graduate degree in International Affairs as well. Sergio has long been fascinated by the subject of genocide prevention and the global enforcement of human rights and international security, and has worked with multiple organizations that all pertain to these fields. He has worked with the Canadian Center for the Responsibility to Protect during his undergrad, has interned under Federal Member of Parliament Ali Ehsassi and was one of the initial members of the Hertie School Security Club. He currently works part time for Canadian Department of Defense which he hopes to eventually start working in full time and is researching comparative studies on how nations have handled threats to international security.

George Tsagaroulis received his Bachelor’s degree from Concordia University where he majored in Sociology and minored in Law & Society. He is currently enrolled in the Master’s in Public Policy and Public Administration at the same institution. Prior to enrolling at Concordia, George served as a member of the Canadian Armed Forces’ Primary Reserve. His experience in the military fostered interest for the field of international relations as it pertains to intergovernmental efforts in addressing threats to global security. As well, his policy work interests include the study of human rights violations during periods of armed conflict. Upon graduation, George aspires to work as a policy analyst for a government agency or IGO in the international relations sector. He hopes that working with MIGS will allow him to develop a deeper understanding of international actors’ role surrounding the protection of human rights and the provision of global security.

Christoph Semken previously served as an Assistant for Information Technology and is currently completing his Master of Arts in International Relations and Economics at the University of Aberdeen. His latest publication "Tracking the Blue: Phone and Vehicle Location Systems for UN Peacekeeping" is available at http://www.providingforpeacekeeping.org/new-issues-observatory/.

We're always looking for volunteers to join our team.

Learn more about volunteering
Back to top