The Concordia Centre for Broadcasting and Journalism Studies (CCBJS) and Le Centre de Recherche Interdisciplinaire sur La Diversité et la Democratie (CRIDAQ) have collaborated to create  a series of conferences and round tables in 2017-2018 on the timely  theme of truth and democracy and the relations between Journalism, Politics, and Social Science.

The conference series will ask quest speakers to address the following questions:

Journalism (real and fake) and the fate of democracy (its truths and post-truths) have suddenly become a hot topic around the world. A veritable political and media storm has social critics and pundits perplexed as to how to explain many of today’s political events. The storm has spread out from the unexpected results of the American presidential elections along with the return of right-wing populism, and the subsequent series of attacks on Immigrants, DACA, LGBTI, and many other vulnerable communities. It comes with a return of ethnic nationalism and the Brexit referendum, a new Cold War, and the globally publicized impeachment (“constitutional coup”) of the President of Brazil, Dilma Rousseff.

These examples are not simply a shift toward right-wing authoritarianism, bigger big business, militarization, or the scapegoating of minorities, but in many instances the fabulous denial of social facts journalists, politicians and social scientists are expected to trust in order to carry out their respective mandates in the production of democracy itself.

In many ways the perfect political and media storm around the world has occurred because the strengths in these fields have given way to their weaknesses. Many believe the political field is weakened to the point of absurdity (endless spin) and that journalism’s professional culture (as gatekeeper) of values of accuracy, reliability, autonomy, and truth is simply a cover for the interests of the most well-off (hence the accusation of being fake news). The social science "thinkers" have not been able to dam the storm surge either perhaps because of their own long divisive debate over the relations between knowledge, truth and power. 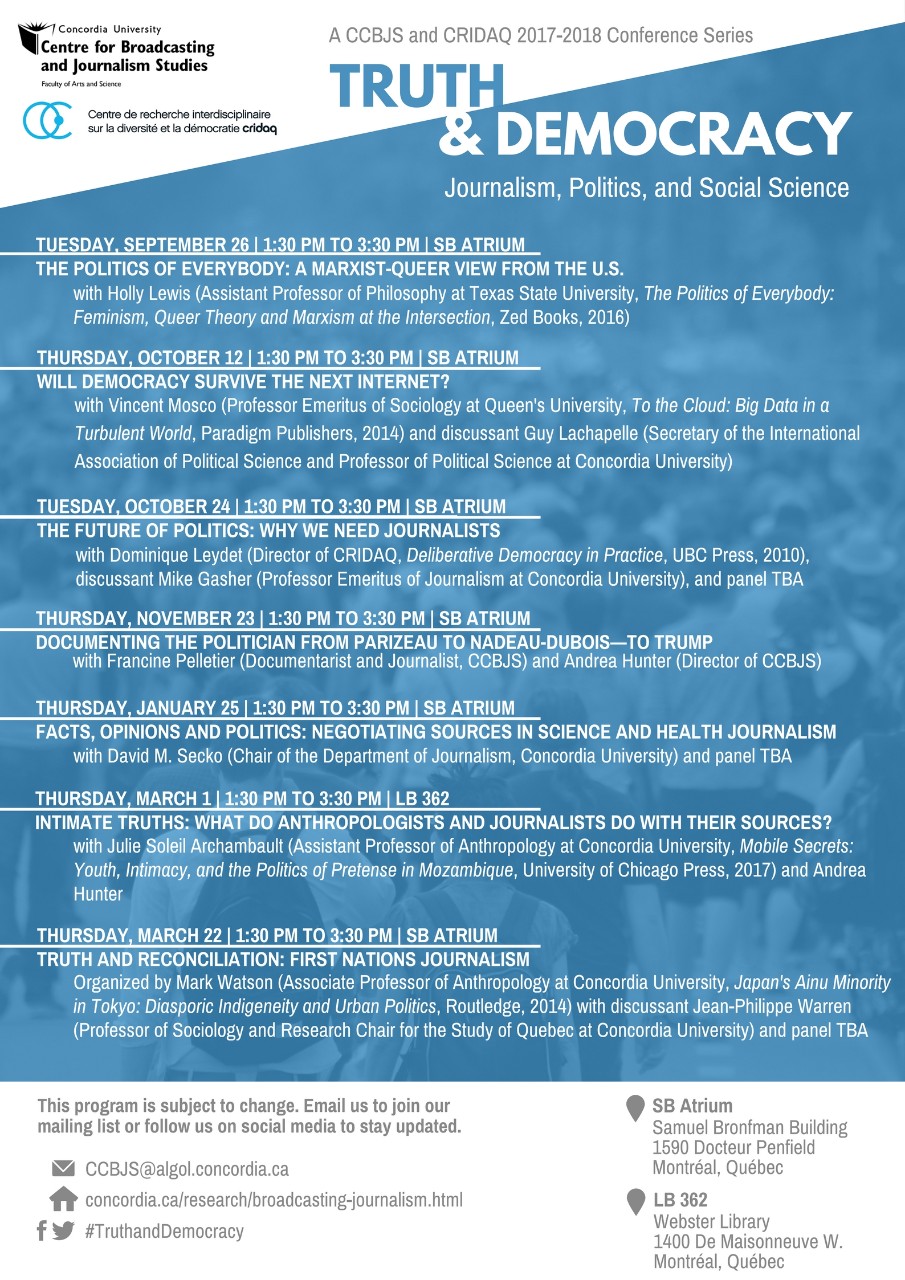 The representation of Indigenous issues and affairs within mainstream media today remains a contentious issue. As the CBC journalist Duncan McCue has put it most recently in his ‘Reporting In Indigenous Communities’ initiative (http://www. http://riic.ca/), the on-going misrepresentation of Indigenous lives, perspectives and viewpoints across different media not only highlights the effects of individual bias but also speaks to the very structure of the mainstream journalistic profession, from how stories get assigned to how much air time or column space they finally receive. Of course, the journalistic landscape has changed dramatically over the last thirty years. A variety of Indigenous-operated media outlets and platforms now challenge and contest the dominant assumptions that normalize popular understanding of Indigenous “realities”. In the process, they are refiguring the social role of journalism in Indigenous communities: replacing, for example, an age-old emphasis on social problems and cultural nostalgia with solutions-oriented analysis and future-focused reporting. The subject matter of this panel will address a range of questions relating to Indigenous journalism in contemporary Canadian society, such as: what is the role of Indigenous-authored journalism and journalism of Indigenous issues and lives today? How is Indigenous journalism changing? What effects is it having on mainstream reporting? What is its role in society? What effects are social media usage and opportunities for alternative media production having on community produced content? What does the future look like for Indigenous journalism and the training of the next generation of reporters?

Intimate Truths: An Anthropologist and a Journalist discuss how new media are transfixing  regimes of truth and along with them shifting thresholds of intimacy. Julie Soleil Archambault  talks about her field work in Mozambique and how the use of cell phones open new kinds of pretense in relationships among youth. Andrea Hunter shares her research on the political economy of Mommy Blogging. Discussion animated by Greg Nielsen: What do anthropologists and journalists have in common and what makes them different?

Journalism under attack: The phenomenon of fake news and challenges of accountability in the new media

Manuel Mogato discussed the spread of fake news in the Philippines and how this undermines the news media’s role.  He addressed the question: “In a time when human rights and other fundamental freedoms in the Philippines are under the spotlight, what should journalists do to respond to the threats of fake news and the lack of accountability by purveyors of false information?”

Manuel Mogato is a correspondent for Reuters in Manila and a Filipino journalist for three decades, reporting on disasters, coups and insurgencies, diplomacy, and politics. Mogato received the plaque for the 2017 Marshall McLuhan Fellow from the Center for Media Freedom & Responsibility for his extensive reporting on President Rodrigo Duterte's administration, including his report on the "state-sponsored" killing of of criminals.

Documenting the Politician: From Parizeau to Nadeau-Dubois

Interviewing politicians can be a particularly tricky business. Journalists are trained to ask questions to get politicians off ‘message track’ and to dig deeper for the ‘truth’ and the ‘real story’. Politicians are trained to speak to the media in a way that gets their message out, and to deflect or divert questions they do not want to answer. Journalists also want politicians to trust them enough to open up, but are also taught to maintain a distance from their sources in order to be ‘objective’ or ‘fair and balanced’. This relationship can get particularly complicated when a journalist is following a politician over months or years to create a documentary.

Francine Pelletier is an award-winning journalist who has written and directed 11 documentary films, including Monsieur(2003), about former Quebec premier Jacques Parizeau. She is currently producing a film about Gabriel Nadeau-Dubois. She has worked for many English and French media outlets including La Presse, the Montreal Gazette and Le Devoir. She has been the parliamentary correspondent in Quebec City for Radio-Canada’s Le Point and co-host of CBC’s The Fifth Estate.

Andrea Hunter is Director of CCBJS and has worked for CBC Radio on national and regional shows for over a decade. She was a producer, on-air contributor and fill-in host of The Roundup, a daily national arts and entertainment program on CBC Radio One. She has also been a producer, reporter, and host on morning and afternoon shows on CBC Radio One in Prince Rupert, Halifax, Vancouver, Victoria and Ottawa.

The Future of Politics: Why We Need Journalists

What role do journalists play in a democracy? In an age when anyone with an Internet connection can tweet, post and publish, why do we need journalists? This panel will explore the role of journalists as watchdogs and analysts, the idea of objectivity, and the importance of public affairs journalism in the dellibrative form of democracy.

Mike De Souza is National Observer's Managing Editor. A Montreal native, Mike has worked as a broadcast and print journalist in his home town, as well as the National Assembly in Quebec City, Parliament Hill in Ottawa and Calgary. He has worked for Reuters, Postmedia and The Montreal Gazette. He now leads National Observer's news coverage out of its Ottawa office on Parliament Hill.

Mike Gasher is Professor Emeritus of Journalism at Concordia University. Dr. Gasher previously worked as a reporter, copy editor and editor for the Cobourg Star, Port Hope Evening Guide, Delta Optimist, Richmond Review, The Columbian and The Province. He is the co-author of Mass Communication in Canada (OUP Canada 2016).

Andrea Hunter is Director of CCBJS and has worked for CBC Radio on national and regional shows for over a decade. She was a producer, on-air contributor and fill-in host of The Roundup, a daily national arts and entertainment program on CBC Radio One. She has also been a producer, reporter, and host on morning and afternoon shows on CBC Radio One in Prince Rupert, Halifax, Vancouver, Victoria and Ottawa.

Will Democracy Survive the Next Internet?

The second speaker in the Truth and Democracy: Journalism, Politics, and Social Science conference series is Vincent Mosco, Professor Emeritus of Sociology at Queen's University.

This talk addressed the transition from the Internet we have known for thirty years to the Next Internet, a highly centralized and commercialized network that results from the convergence of cloud computing, big data analytics and the Internet of Things. Specifically, the talk takes up the implications of this transition for democracy, including  threats to the public sphere and opportunities to create a public utility in information.

The Politics of Everybody: A Marxist-Queer View from the U.S.

Our first speaker in the Truth and Democracy: Journalism, Politics, and Social Science conference series was Holly Lewis, Assistant Professor of Philosophy at Texas State University.

Dr. Lewis specializes in Continental Philosophy, Marxist political economy and debates in gender. She is active in the anti-fascist movement in her University. Her specific interest has been in critiquing the voluntarist counter-cultural sentiment in Western queer politics through an economic analysis based on feminist readings of Capital. She holds a Ph.D. from the European Graduate School in Media and Philosophy, an MA from the University of Pennsylvania in Comparative Culture and Politics and an MFA in Fiction from New York University. She is the author of The Politics of Everybody: Feminism, Queer Theory, and Marxism at the Intersection. 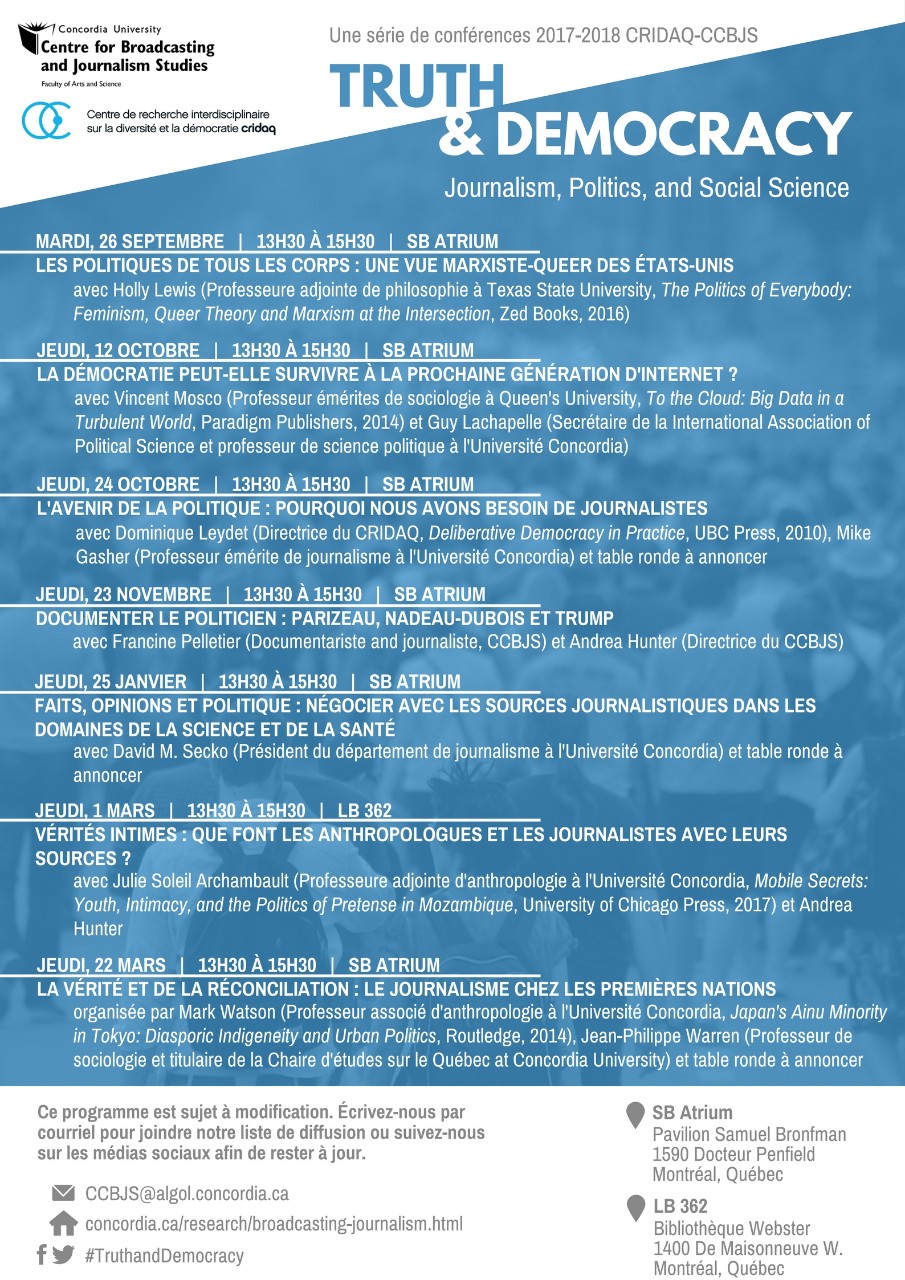