This research program aims to establish a new form of inclusive, dialogic journalism that demonstrates limitations with how poverty and immigration are covered in the mainstream news media. To this end we bring Concordia researchers and students to directly engage with community members who have long been excluded from journalistic narratives.

News media are among the first observers of social inequality and crises associated with poverty and immigration, and thus they are critical producers of public knowledge that frame both the horror sand the challenges people in these communities face. However, the vast majority of news articles on poverty and immigration published in mainstream news outlets do not address the subjects of the stories as part of their imagined audience.

How could journalism better serve the information needs of these populations? The central objective of our research program is to create journalism that directly addresses the subjects of poverty and immigration, who are copiously reported on, but who are rarely included in the "implied audience" for news reports.

Read more about coverage of our project.

This research examines how journalists are using crowdfunding to create new journalism ventures. It explores how the role of the journalist changes when journalists are both the producers and marketers of their work, including how they define and negotiate relationships with their funders. One objective of this research is to design a set of best practices that can serve as a guide to journalists and independent news organizations that wish to crowdfund to support their journalism. This research is funded by a SSHRC Insight Development Grant (2019-2022). 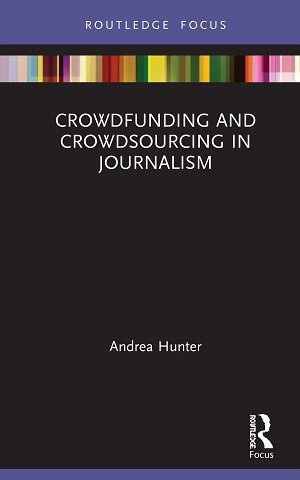 This book offers an in-depth exploration of crowdfunding and crowdsourcing in journalism today, examines their impacts on the broader media landscape, and looks at how these practices disrupt traditional journalism models, including shifting journalistic norms, professional identity, and the ethical issues at play when journalists turn to social media and the Internet to solicit widespread support.

While there is often a lot of hype and hope invested in these practices, this book takes a critical look at the labour involved in crowdsourcing journalism practices, and the evolving relationship between audiences and journalists, including issues of civility in online spaces.

The author draws on in-depth interviews with journalists in Canada and the United States, as well as examples from the United Kingdom, Germany, Sweden, and Australia, to provide a comprehensive study of increasingly important journalist practices.

The book is a valuable resource for academics, researchers, and journalists who are interested in political economy, journalism studies, and labour studies.

This multimedia research-creation project led by Aphrodite Salas aims to use mobile journalism and an emerging form of conciliatory journalism to document clean energy solutions being offered by Canada’s First Peoples. While mainstream media outlets have consistently focused on multiple crises in Indigenous communities there is less focus on success stories (Harding, 2006; Fleras, 2014; Fast & Drouin-Gagné, 2019). This research-creation project will produce three short documentaries incorporating methods of conciliatory journalism with a core team of students in the field. The project is based on Professor Salas’ previous work with Kiashke Zaaging Anishinaabek-Gull Bay First Nation.

Through collaboration with partners at Indigenous Clean Energy, the documentaries will profile Heiltsuk First Nation in British Columbia, the historic Metis community of Île-à-la-Crosse in Saskatchewan, and the northern Quebec Inuit community of Inukjuak as each takes broad-based and long-term action towards a clean energy future. The project will explore how conciliatory journalism may be used as a potential tool in the multifaceted task of decolonizing the media and journalism in Canada. Conciliatory journalism is a “new form of socially responsible journalism” that has emerged in recent years as an alternate method of storytelling during times of social polarisation (Hautakangas & Ahva, 2018).

The project will involve hiring a core group of students as research assistants to travel with Professor Salas to each location. The students will be trained in mobile and conciliatory journalism tools and techniques, they will receive specialized training on covering Indigenous issues in an era of truth and reconciliation through workshops by Journalists for Human Rights (JHR), and they will be trained in the protocols and practises involved in the dissemination of knowledge primarily through the building of multimedia sites on CTV Montreal and by participating in academic and public documentary screenings.

The training that will be offered on covering Indigenous issues and conciliatory journalism is meant to help a new generation of journalists understand the critical nature of community involvement, co-creation and collaborative practises for particular kinds of stories. The goal is to ensure each RA gains knowledge and confidence in these areas in order to eventually produce their own journalism and research on Indigenous issues through deep collaboration and ethical engagement.

Initiated in 2020, the Solutions Journalism Project stems from a partnership between the department of Journalism and Atelier 10, a Québec publisher.

Past Talks and Conferences