How to navigate a world of media clutter 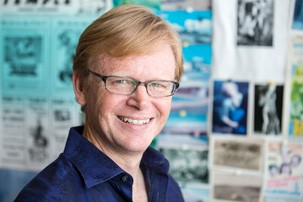 Concordia professor Charles Acland: “Every generation for the last 150 years has believed that they are experiencing the absolute peak of sensory bombardment.” 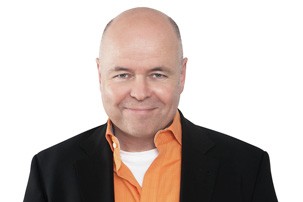 Under the Influence host Terry O’Reilly: “Of the thousands of messages we take in each day, the average person only retains two.” | Photo by David Ward

According to Terry O’Reilly — the award-winning host of CBC Radio’s Under the Influence — the average Canadian is bombarded with upwards of 3,500 media messages a day.

On Thursday, March 6, O’Reilly will sit down with Charles Acland, professor and Concordia University Research Chair in Communication Studies, for “Strategies for media clutter”: an exploration of how we can navigate our increasingly overwhelming media landscape.

Moderated by Globe and Mail Ottawa political editor Ryan MacDonald, this will be the inaugural event in the 2014 Thinking Out Loud conversation series.

We asked O’Reilly and Acland to give us a preview.

How bombarded by media are we, really?

Terry O’Reilly: We have never been exposed to more media than in this day and age. This clutter makes everything invisible. Of the thousands of messages we take in each day, the average person only retains two. The irony is that it is advertisers who have made this mess, and we spend our entire careers battling the clutter we have created.

Charles Acland: Every generation for the last 150 years has believed that they are experiencing the absolute peak of sensory bombardment. In the future, we will likely consider what we are experiencing today as a calmer time. The reality is that media-generated sensory overload is an idea as much as it is an experience. We’ve been wrestling with this concept for ages, and this history is what we need to investigate in order to understand our relationship with media.

Given this reality, what are the challenges of effectively communicating a message?

TO: In the advertising world, the key to breaking through clutter is capturing the attention of the consumer. This is the oxygen of a successful brand. That’s why creative departments are so important and why so much money is invested in this part of the process. Successful advertising is essentially creative storytelling that creates feelings in the consumer. And, again, you have to bombard people with your message, which, paradoxically, adds to the clutter.

What effect does media clutter have on academic discourse and criticism?

CA: There now exist online resources for academics that were not as readily available as before. This has changed the scope and scale of research projects —for students as well as scholars. However, having more materials to consult doesn’t necessarily translate into better-quality research. Academics still need the analytical tools to sort through the sheer magnitude of resources at their disposal. People who are able to find the relevance in the clutter will be the skilled scholars of tomorrow.

How has social media transformed the advertising landscape?

TO: Social media and big data have helped advertisers target their messages in ways never before seen. And if you care about the consumer, social media is a great place to listen to their needs. Prior to this technology, you would have had to hire a research company to conduct focus groups and pay hundreds of thousands for this service. On the flip side, negative feedback never goes away — it just hangs in cyberspace for the whole world to see.

Is there a “healthy” way to consume media?

TO: One of reasons I do my show is to get people to look at advertising through a different prism. To understand the process of how we are being bombarded by sophisticated marketing campaigns is empowering. I also believe in voting with your wallet. If you are annoyed by an ad, don’t buy the product. It’s that simple. Trust me: when sales go down, marketers get jumpy!

CA: With the media era comes a set of demands for our attention and our time. We always don’t think of the labour that goes into engaging in things like social media. Once we assign a value to the time spent consuming and actively taking part in media, then we can make informed decisions as to how we engage.


“Strategies for media clutter” with Charles Acland and Terry O’Reilly takes place on Thursday, March 6, from 7 to 8 p.m. at the D.B. Clarke Theatre in the Henry F. Hall (H) Building (1455 De Maisonneuve Blvd. W.). A book signing will follow at 8:15 p.m.

Register for this conversation — and see the full Thinking Out Loud schedule.