It features early images of family and friends, her mailed photographs, as well as films examining the work of authors, philosophers and artists, notably her 2019 film I confess which connects American novelist James Baldwin with Quebec revolutionary nationalist Pierre Vallières.

The exhibition was organized by the National Gallery of Canada (NGC) and curated by Andrea Kunard, senior curator of photographs at the NGC. In fact, Kunard first discovered Davey’s work in The Modernist Document exhibition held at the Ellen Art Gallery during the Mois de la Photo back in 1999. 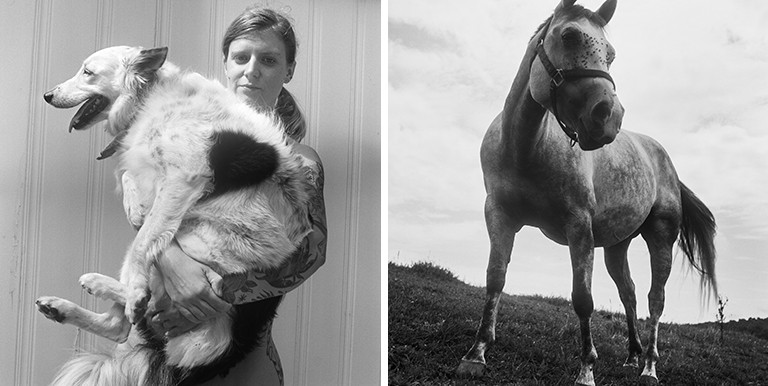 For Davey, her past and present are reconnecting once again at Concordia in Montreal. “I feel a bit like I am closing a circle,” she says.

“It’s nice to be showing in the gallery where I was a student so many decades ago. To return to Montreal to launch this exhibition, and see old friends and family, has been a very rewarding experience.”

The Montreal- and Ottawa-raised artist, who now lives in New York, is a revered figure in the art world. Her work can be found in major public collections, including at the Tate Modern and the Metropolitan Museum of Art.

A survey of her videos will be presented at the Museum of Modern Art in 2022; and the critically-hailed Moyra Davey: The Faithful — first exhibited at the NGC in 2020 — covers four decades of artistic production.

The exhibition is shaped by themes that animate Davey’s work: commuters in the New York subway, the city’s disappearing newsstands, representations of the body, and the daily accoutrements of urban and domestic environments.

As Kunard states, “Throughout her decades-long practice, Davey has explored the relationship between photography and language, and between the still and moving image. Videos interweave personal history with critical concerns on art, film and literature, while photographs are often revisited and reassembled to juxtapose temporalities that can be many years apart.”

Before moving on to a career in the United States and internationally, Davey studied photography at Concordia in the 1980s, which helped shape her work.

“[Legendary photographer and Concordia professor] Gabor Szilasi—he influenced me with his work and all the people that he introduced me to, like Robert Frank who was a great love of mine in photography,” Davey says.

“So, yes, my time at Concordia definitely shaped me. Coming back to Montreal and Concordia for this exhibition is exciting and makes me really happy.”

The exhibition’s accompanying book entitled i confess is on sale at the gallery.