Unseen in 20 years, the apex predator was thought to have disappeared from the Campo-Ma’an Conservation Area
|
By Patrick Lejtenyi

Photo by David Clode on Unsplash

A Concordia-led research team revealed direct evidence of the presence of the African leopard in the Campo Ma’an Conservation Area in southern Cameroon for the first time in more than 20 years.

The adult leopard was photographed by motion-capture cameras the researchers placed around the conservation area in the summer of 2019 as part of an unrelated study. Leopards were thought to have disappeared from the area, which had been considered a stronghold for this species. The last direct sighting of the leopard (Panthera pardus pardus) was in 2000.

PhD student Isaac Blaise Djoko led the study under the supervision of Robert Weladji, professor of biology in the Faculty of Arts and Science. Alys Granados, a postdoctoral researcher at the University of British Columbia, and Patrick Paré, head of the Conservation and Research Department at the Granby Zoo, are co-authors. Their discovery was published in the journal CATnews. 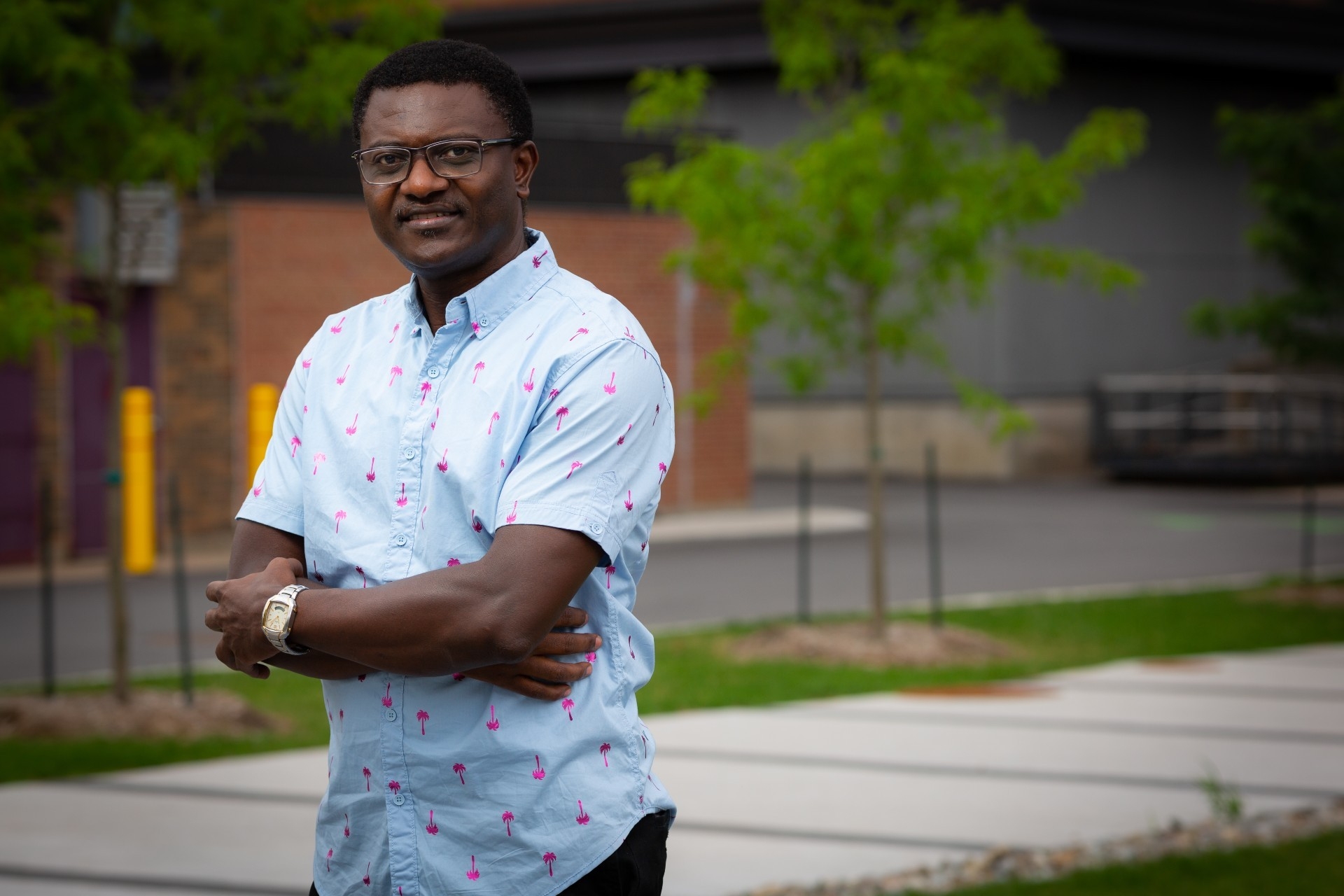 Robert Weladji: "There is some human activity outside of the park, and this leopard is roaming near villages. So not only is the leopard at risk, so are the people. ”

The researchers did not set out to find leopards. The discovery was a happy by-product of an elephant-tracking project involving the use of 19 camera traps spread out strategically across the conservation area. A leopard was spotted less than two months in, but no other image was recorded the following 10 months and up to now.

While the discovery was exciting, Weladji says it also suggests something more problematic about conservation efforts in Cameroon.

“The camera that caught the image is actually outside of the Campo-Ma’an National Park,” he explains. The leopard’s presence beyond a supposedly protected area suggests to him that animals may not be finding enough prey inside it, they are not as secure as they should be and that their home range may be extending well beyond the national park borders.

“This also means the leopards are more exposed than we think. There is some human activity outside of the park, and this leopard is roaming near villages. So not only is the leopard at risk, so are the people. This is, after all, a large predator.”

In questionnaires the researchers administered to residents in 11 nearby villages, 65 per cent reported conflicts with leopards, and more than 38 per cent blamed leopards for attacks on livestock. With a decrease in natural habitat for the leopard’s traditional prey, Weladji says the apex predators will naturally gravitate toward areas providing easy sources of food. 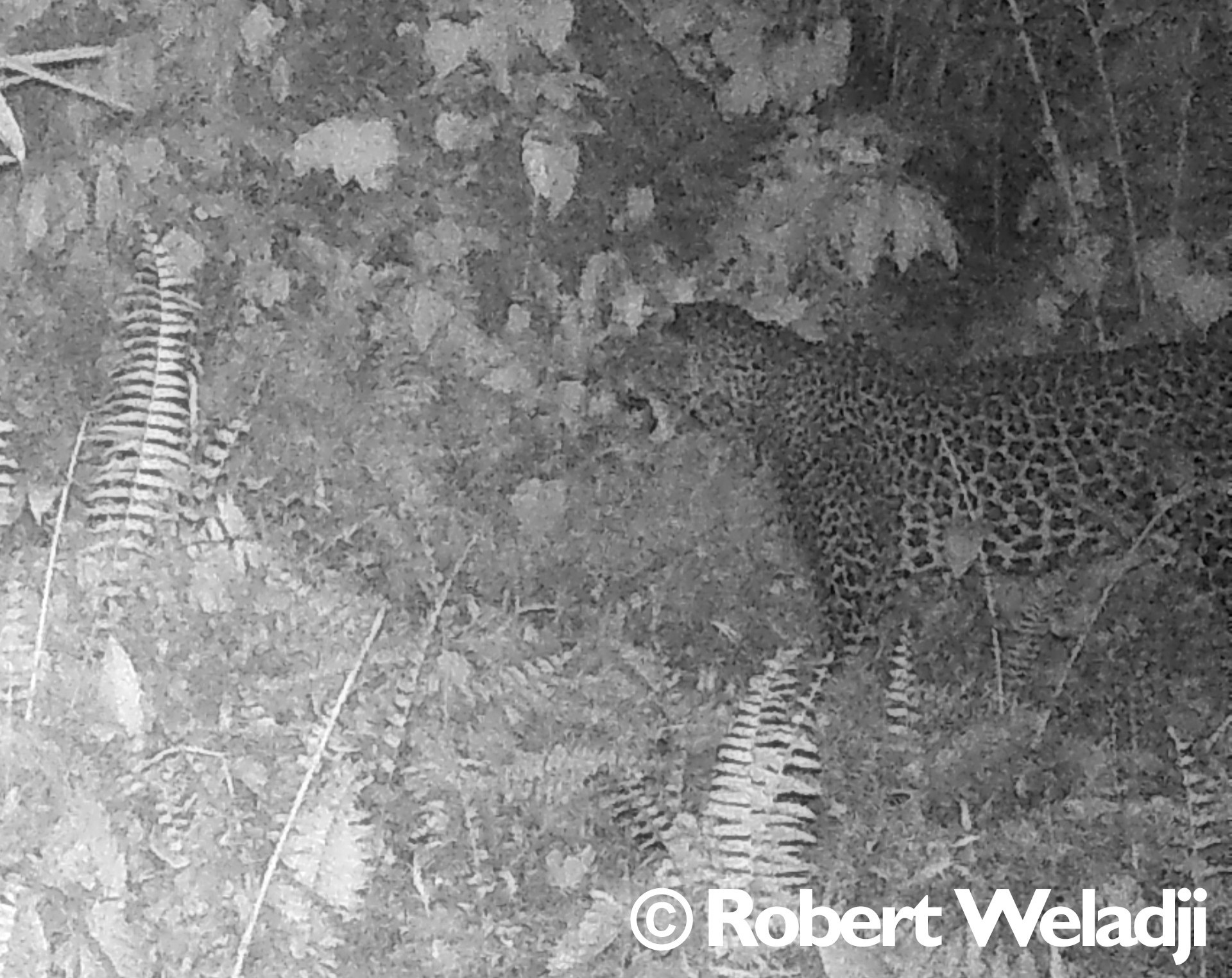 Detail of photo of African leopard by Robert Weladji

One of many at-risk species

The African leopard is currently listed as “vulnerable” by the International Union for Conservation of Nature Red List of Threatened Species. While the cat can survive in a variety of environments, its overall population is decreasing, mostly thanks to human encroachment and loss of habitat, as well as prey loss and poaching. The area of southwestern Cameroon being studied by Weladji and his team is undergoing significant transformation with ongoing major development projects such as dam and port construction projects. There are also large agri-business interests, in particular a palm oil industry that will require 60,000 hectares of forest to be logged.

The biodiversity of the Campo-Ma’an Conservation Area is rich, but under significant pressure. The region is home to western lowland gorillas, forest elephants, chimpanzees, giant pangolins, mandrills and African forest buffalo, all of which are considered at risk from human encroachment and poaching.

Of the 29,000 photos taken by the team’s cameras between May 2019 and August 2020, only three captured an image of a leopard. Far more common were photos of humans, some engaged in illegal hunting.

“The only way forward for us is to intensify the camera trap program,” Weladji says. “Thanks to a Concordia equipment grant, I will be deploying another 50 cameras in the region beginning in November. Hopefully we will be able to capture more images of leopards and other threatened species.”

He hopes the additional cameras will provide a more accurate estimate of the number of leopards left in the area and inspire further local conservation efforts.