Tinder is a good example of how people use technology for far more than we think, Concordia researcher says

Stefanie Duguay: “When people encounter a new technology, they use it in ways that fit their needs and lifestyle.” | Photo by Kon Karampelas on Unsplash

Tinder’s meteoric rise in popularity has cemented its position as the go-to dating app for millions of young and not-so-young users. Although it is widely known as a platform to facilitate hookups and casual dating, some of the app’s estimated 50 million+ worldwide users are employing it for something altogether different.

From multilevel marketing to political and health campaigning to promoting local gigs, Tinder users are appropriating the platform for their own purposes. And these can often have little to do with sex or dating. This so-called “off-label use” — a term borrowed from pharmacology describing when people use a product for something other than what the package says — is explored in a new paper published in the journal The Information Society.

“When people encounter a new technology, whether it’s a hammer or a computer, they use it in ways that fit their needs and lifestyle,” says author Stefanie Duguay, assistant professor of communication studies in Concordia’s Faculty of Arts and Science.

“This is commonly referred to as user appropriation in science and technology studies. However, once you buy a hammer, it doesn’t undergo regular updates or develop new features — apps do. They come with their own marketing, vision for use and sets of features, which they regularly update and often change in response to user activity.”

For this reason, Duguay says, the paper engages with Tinder as a way to think through what appropriation looks like in this back-and-forth relationship between users and apps. 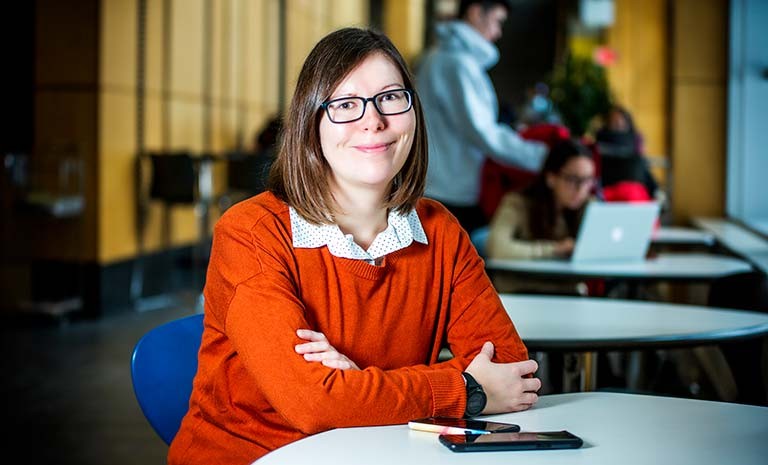 What’s in a label?

Duguay began her study with a thorough investigation of the Tinder app’s design, looking at the mechanics its developers created in order to guide users for its intended purpose. She next looked at dozens of media articles about people using it for purposes other than social, romantic or sexual encounters. Finally, she conducted in-depth interviews with four “off-label” users.

One user’s profile was being used to conduct an anti-smoking campaign. Another, an anti–sex trafficking campaign. A third was using the app to market her health products and the last was supporting US Senator Bernie Sanders’s Democratic Party presidential nomination run in 2016. She then compared and contrasted these different approaches to off-label use.

“I found that a lot of the time, Tinder’s expected use — dating and hooking up — informed or complemented their campaigns,” she says. “There would be an element of flirtatiousness or they would draw on users’ perception of Tinder as a digital context for intimate exchanges.”

She adds that many Tinder users who were on the app for its expected uses became upset when they discovered these profiles’ actual aims. “That shows that off-label use can be somewhat disruptive on the platform,” she says. “Though this depends on how narrowly people see that app’s purpose.”

Duguay was also curious to gauge Tinder’s own reaction to these kinds of user appropriation. Over the course of her research, she got the sense that this activity was only concerning to the company in high volumes.

Spam bots, for instance, became a serious problem soon after the app’s launch. Duguay notes that Tinder responded quickly to this wave of off-label use, which often involved bots phishing for credit card numbers, by adding daily swipe limits and block-and-report buttons.

“But those measures also made it difficult to sell products or campaign for something,” she says. “They may be very useful in getting rid of massive amounts of spam, but in other ways, this reasserting of on-label use can shut down innovation and creativity.”

While profit-making multilevel marketers may be able to overcome swipe limits by affording premium accounts, she writes, non-profit campaigners find these obstacles can ultimately silence them.

Tinder also adopted some of the uses popping up on their platform, wading into the political arena with their “Swipe the Vote” feature, for instance. Non-official campaigns now need Tinder’s specific authorization to promote their cause or product.

Not looking down on hooking up

Duguay says conversations involving Tinder tend to not to be taken very seriously because of the app’s association with hookup culture. This dismissiveness obscures a larger point, she feels.

“I think sex and dating are very meaningful activities in our society,” she says. “But I was also seeing this range of activity on Tinder. Platforms like this are more like an ecosystem, and when users adopt different purposes than the ones they are designed for, the platforms can change their guidelines or features in ways that greatly affect their users.”

Giving people the ability to engage in off-label use means that apps like Tinder can feature not only in meaningful social and sexual encounters but also in individuals’ political or financial participation and broader endeavours for social good.


Read the cited paper: “You can’t use an app for that: Exploring off-label use through an investigation of Tinder.”