Concordia PhD student Jennica Grimshaw: “The students were focusing more on succeeding in the game than on the mistakes they were making.”

One of the great hurdles facing students of a second language is their own anxiety about speaking it aloud. But a new study from Concordia believes that a little fun and games can help shake off those nerves and make learning a little easier.

In a new paper published in the journal Language Learning & Technology, PhD student Jennica Grimshaw and Walcir Cardoso, a professor of education in the Faculty of Arts and Science, examined whether playing a mobile game prior to class time would help players’ fluency and willingness to communicate.

The game they chose was Spaceteam ESL, designed by Cardoso and his Concordia colleague David Waddington, associate professor of education.

Every week for six weeks, the researchers tested two groups of native French speakers with low to intermediate levels of English for 15 minutes, prior to a weekly English class. One group would play Spaceteam ESL on their mobile devices while the control group would engage in traditional forms of fluency promotion, such as information gap games (e.g. asking for directions to a cinema).

As Grimshaw outlines it, the players opened the game on their devices and each received individual randomized — and nonsensical — instructions. “If it said, ‘Pull a brown chicken,’ they would need to say that out loud,” she says.

The student’s teammates would then carry out the instructions, no matter how bizarre or comical, by manipulating icons on their own devices.

“Everyone’s panel is different and everyone is receiving different instructions,” she explains. “So they need to be simultaneously aware of what’s on their screen, read it out loud and listen for instructions. It can be a little hectic, but in a good way!” 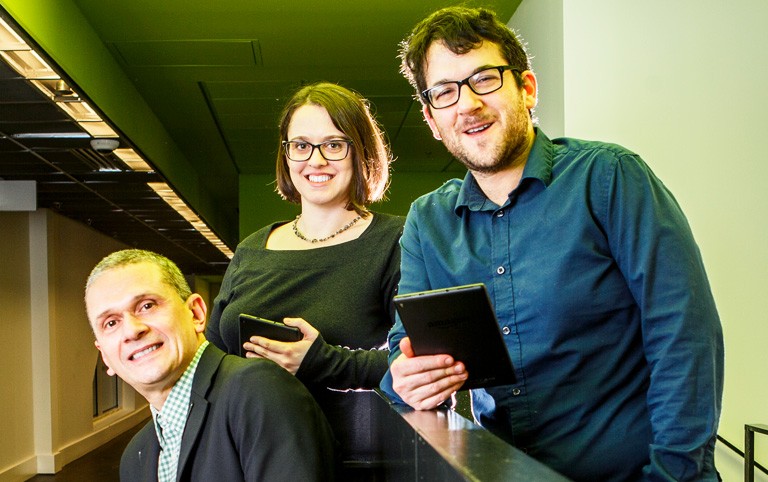 The fun aspect was important

Grimshaw and Cardoso were hoping to answer two main questions with their research: does playing the game as a warm-up before class positively affect the students’ English fluency? And would it decrease their anxiety about speaking English? The researchers hypothesized that they would.

After six weeks of conducting tests, they found that the treatment group did outperform the control group — though not in all metrics. For instance, there was no significant improvement in the treatment group’s syllables-per-minute. However, there was a widespread feeling that game play was an effective means of lowering anxiety and encouraging pronunciation practice.

“I think the ‘fun’ aspect was important,” says Grimshaw. “It did reduce anxiety. Even though there was pressure and stress from the game because it was timed, the students were focusing more on succeeding in the game than on the mistakes they were making.”

She adds that there was also peer feedback.

“Say you were mispronouncing a word. Someone on your team might repeat that word or say it with a different pronunciation just to check if that was the correct word.”

For Grimshaw, one of Spaceteam ESL’s strengths is its adaptability. It can be used to help students at all levels of comfort in a second language, and it is by no means limited to English. A French version is now available.

The study also underscores the effectiveness of mobile gaming and technology in language learning in general.

“With its endless possibilities,” write Grimshaw and Cardoso, “mobile gaming in [second language] education may prove to be invaluable to language and development.”