The tarps and scaffolding will soon be removed from the Grey Nuns bell tower, located on Concordia’s Sir George Williams Campus, after nine months of extensive masonry restoration work.

The university undertook the project to prevent deterioration of the building facades and the potential loss of architectural heritage. Work began last August after Concordia received an $851,000 investment from the Government of Canada — as part of Park’s Canada’s National Cost Sharing Program — to put towards the conservation of the National Historic Site.

It's a beautiful building to be working on

“When you walk the halls of the Grey Nuns Building there’s a sense of dignity and respect that we wanted to protect on this project,” says project manager Gem Silver from Facilities Management.

This was done by preserving as much of the original structure as possible, taking the time to check for historical accuracy and using technologies that would marry or complement the building’s existing architecture.

“We used modern techniques in terms of anchoring and supporting but we didn’t take anything apart for the sake of rebuilding,” says Silver. “We salvaged, reinforced and stabilized the existing to make it beautiful again.”

An example of this mindfulness was demonstrated when the caps on top of the turrets, which frame the bell tower, were removed for cleaning and deemed in need of replacement.

“When we removed the caps, we discovered that they were different in style, shape and construction,” says Silver.

“With a little digging through the Grey Nuns archives, we were able to place when the change was made and were able to identify the original.”

Two exact replicas were commissioned from local artists with stone sourced from a quarry in Quebec. The new caps were hand carved and replaced in the exact location of their predecessors, and the originals have been kept safe with the intention being to use them somewhere else on campus for everyone to enjoy.

“It’s a beautiful building to be working on,” says Pierre Bernier, site superintendent for St-Denis Thompson.

“It isn’t every day that a project of this magnitude comes along, and we all feel great pride in the work we’ve done here.” 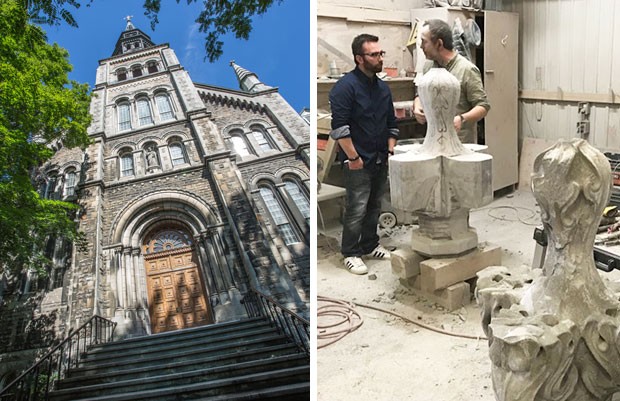 Built by renowned architect Victor Bourgeau, the first wing of the Grey Nuns Building (formerly the Grey Nuns Motherhouse) opened its doors to the community a few years after Canadian Confederation.

The H-shaped structure, with a magnificent chapel at its centre, went through several phases of construction but was never fully completed according to Bourgeau’s plans.

For more than 130 years, the building served as home to the Roman Catholic Congregation of the Sisters of Charity of Montreal, also known as the Grey Nuns. It also served as the centre for their many benevolent works in Montreal and their missionary efforts around the world.

Students, faculty and staff members are encouraged to fill out the Concordia Facilities questionnaire.