What makes us more likely to take the stairs?

A Concordia and Peking University study looks at how location, height and traffic volume dictate pedestrian choices
|
By Cléa Desjardins 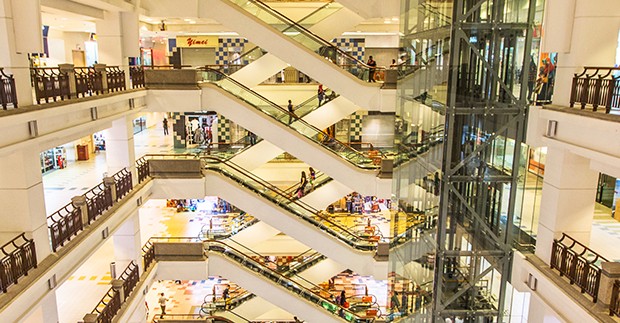 Death rates due to health problems like obesity, type 2 diabetes, hypertension, and heart disease are on the rise. According to the World Health Organization, that’s due to our increasingly sedentary lifestyles.

Clearly, it’s important to lead more active lives. Something as simple as taking the stairs can make a big difference. But can pedestrians be convinced to make healthy choices when an escalator seems so much faster and more convenient than a staircase?

Yes, say researchers from Concordia and Peking universities. You just have to make sure that the stairs are far, far away from the escalator — 100 per cent farther away, in fact.

The study, recently published in Environment and Behavior, examines the theory that separating stairways from escalators between pairs of origin and destination floors in a shopping center would increase the rate at which the stairways were used.

To test the hypothesis, the researchers monitored 13 stairways and 12 pairs of escalators in seven connected shopping centres in downtown Montreal. Counts of moving pedestrians on stairs or escalator were conducted in five-minute blocks by a single observer, who watched the traffic flow between 10:30 a.m. to 12:00 noon, and from 12:30 p.m. to 2:30 p.m., to ensure variability. A total of 33,793 pedestrians were counted ascending or descending over 35 days.

“Environmental factors have been explicitly identified as having an impact on stair climbing, including the visibility of the stairway and its width. This study shows that staircase location is just as important, and should be factored in when planning new buildings,” says senior author John Zacharias, who conducted the study while a faculty member in the Department of Geography, Planning and Environment at Concordia. He is now a professor at the University of Peking.

For study co-author and Concordia psychology alumnus Richard Ling, the health outcomes of this study are most important. “The initial focus of the research was to determine what correlation might exist between the separation or proximity of stairs and escalators to the decision to use one or the other. The results support an interesting point of logic for those who design space for health optimization,” he says.