Short term rentals and real estate in the time of corona 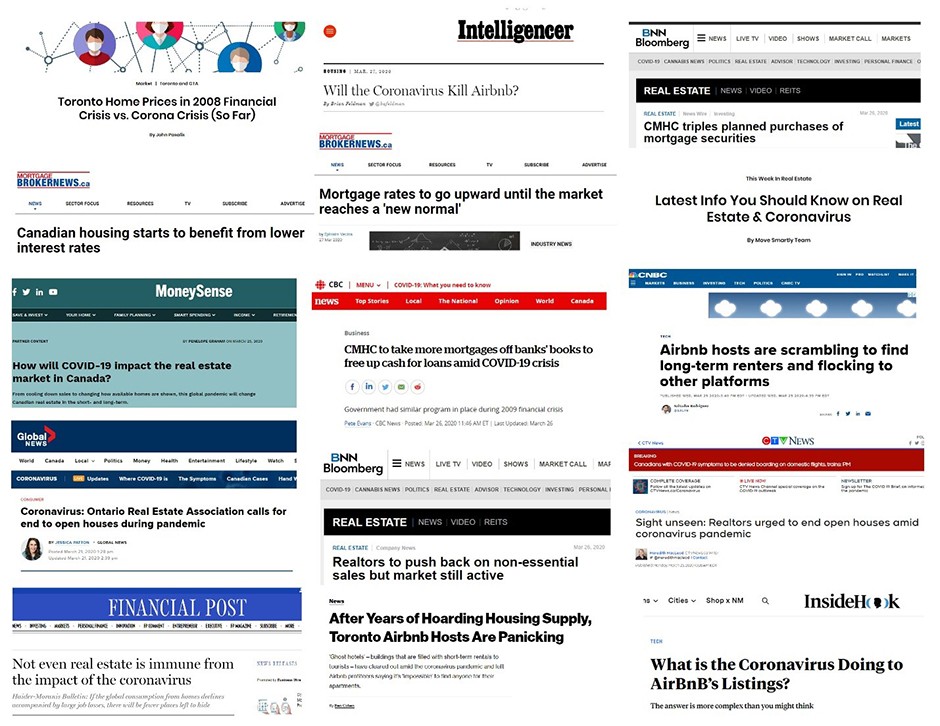 As we are progressing into unknown territory – a global pandemic, a global slow down, and major shifts in daily social behaviours – a lot of things have changed, are changing and could potentially change. Even though most of us are at home (and should remain there), I’m sure that many have been following the developments on various fronts and trying to filter through the overload of sometimes conflicting information that is constantly bombarding our screens.

For now, it looks like Uncertainty is the only thing that is now certain.

As a researcher focused on the built environment and buildings, my news searches and feed usually include real estate news. Over the last weeks, one thing has specifically caught my attention: the interplay between the current crisis and the real estate market. While their relationship is complex and involves many factors, this time there is a specific spotlight on short term rentals and investment properties.

I’ve tried to put together some of the headlines I’ve seen over the last two weeks (these are not my recommendation of articles to read, but just a random group of headlines that made their way to my news feed).

Now, and before I venture further into the topic, I have to make an important disclaimer: I am not a real estate expert, I am not an economist, nor a financial expert. Thus, all the ideas I will present can be considered opinions (even if backed up by some data) and cannot be used as a basis of any decision.

The Canadian economy – ever more dependant on real estate

One of the first moves the bank of Canada announced was the purchase of mortgage securities –to free up liquidity for more lending. The initial $50B purchase was then tripled and coupled with further cuts in interest rate. Measures that some real estate professionals claims will be enough to keep the real estate market going, others think things will take more time to stabilize.

Since the 2008 crisis, real estate has been key to economic growth in Canada. In 2018 real estate and its related industries were estimated to account for up to one fifth (20%) of Canada’s GDP and more than 70% of the country’s national wealth. Residential real estate in specific is one of the biggest contributors to the country’s economy – making up almost 7.5% of our GDP.

If we take a look at Statistics Canada’s report on Indebtedness and Wealth Among Canadian Households, several points are alarming in the post-2008 period:

Residential real estate also makes up one of the biggest portions of profits for Canada’s banks, in the form of residential mortgages. Also, the increase in home prices since the year 2000 resulted in a drastic increase of almost 500% in home equity line of credits (HELOC) –people are increasingly using their homes as an ATM. Finally, the rise in home prices has been associated with increased household spending – which fuels most of the economy.

So, it is fair to conclude that if the residential real estate market takes a hit, a lot of things (wealth, growth and other economic sectors) can sink with it.

Now, many are asking if real estate activities can continue during the current events, limitations and restrictions, and whether there are bubbles that will/could/should burst.

Some on Twitter, social media and alternative media, suggest that properties used for short term rentals and speculative purchases of investment properties (especially condos, apartments and plexes) can be a strong enough trigger for a price correction.

I am not really in a position to answer this question. But I am interested to look further into it with you.

As most of us are aware, short-term-rentals and home-sharing platforms and companies have been gaining ground in the past years. The most famous of those platforms is Airbnb, but other platforms such as HomeAway, Vacasa and even booking.com are also becoming more popular.

One important thing to note is that many of those platforms (such as Airbnb) do not publicly release information regarding the listings, bookings or hosts. Thus, researchers usually have to depend on the information gathered through data mining.

The pitch of these companies is simple: people can make extra cash by renting out rooms, part of homes or entire homes that are not used. For travellers and vacationers, who make up most of the demand, they get access to a broader and cozier variety of accommodation options – when compared to hotels.

The reality is, as several of you know, that many people acquire or keep properties specifically to rent out on such platforms. The reason is that they provide much better returns: in a 2016 study, it was estimated that renting out a condo less than 13 days a month on Airbnb could equate to a 1-month worth of long-term rent. Considering that, over the last few years, they estimate that most properties have been running at 80% capacity in the GTA, this could mean a lot of income for property owners.

The consequences of these short term rentals on property values, rent prices, home availability and even dwelling quality have been researched and documented (I suggest taking a look at the work of UPGo, the Urban Politics and Governance research group at McGill).

Moreover, we have to understand that short-term-rentals are no longer a niche in the market. In 2018, more than 90,000 daily active listings were found in Canada (with 46% concentrated in Montreal, Toronto, and Vancouver). In 2019, Montreal and Toronto each had more than 22,000 listings.

In a study by Statistics Canada, they estimate that, between 2015 and 2018, the revenues of private short-term accommodation grew by almost 1000% in Quebec and Ontario – reaching a total of more than $100M. The study also highlights that more than 60% of all listings were for entire homes/apartments, and that apartments and condos made up almost half of the total listings.

Sharing your home with others, for a fee, might be something positive and legitimate. However, the legality and correctness of renting out an entire home or apartment for most of the year is something that has been debated – especially if your neighbours complain and your building association bans it.

But a more alarming dimension is that Airbnb estimates that 40% of its Toronto hosts depended on their short-term-rental income to make mortgage or rent payments.

So this begs the question: if you specifically purchased the property (using a mortgage or other financing tools) or transformed an existing property with an outstanding mortgage to a year-round hotel, did you inform your lender? Have you informed your landlord if it is a rented property? Legally speaking, you should.

Can short-term-rentals put the real estate market at risk?

Again, I am not an expert to answer this question. But, if mortgages and residential loans are exposed to risks that aren’t disclosed (such as exposure of residential mortgages to the hospitality business), they certainly might be less safe than originally anticipated.

In the quick turn of events that followed the spread of COVID19, many platforms have forced hosts to replay full refunds to guests that had to cancel their trips. Reporters and home affordability advocates have used this sudden collapse of the short-term rental business to stress on the damages and risks it causes to the market and communities.

People took to Twitter, Facebook and other social media outlets (such as Reddit) to either vent out their anger against short-term rentals or propose their theories regarding the future of the market. Some are claiming that the drop in short term rentals has caused a surge in long-term rental listings (in cities such as Dublin, Madrid, various US cities and even Toronto). Others have indicated that there isn’t yet enough evidence to come to any conclusions.

Also, short term rental platforms have tried to manage the damages (to their business and image). They tried to debunk the stagnation in their business by indicating that there are still many listings available and that many rural properties are being rented as quarantine locations. In other places, short-term rentals were banned in fear of the virus spread.

Professor David Wachsmuth of McGill’s UPGo was quoted saying that the discussion among hosts in Canadian cities indicates that their businesses have evaporated overnight – leading to a noticeable increase in furnished apartments being listed for long-term rentals.

How much damage? And who is responsible?

While we know that short-term rentals can threaten long-term housing availability and affordability, these threats do not directly mean risks to the real estate market.

However, the most risk to the market comes from properties that are converted to short-term rentals on a full-time basis (this puts the spotlight on entire home listings that are active for most of the year).

Also, hosts that list a property they aren’t using or their 2 or 3 extra bedrooms on the platform are not hoarding housing supply and are not necessarily taking any excessive risks. However, it is the hosts who have multiple entire home listings that are active for most of the year that can put the market at risk. In many cases, these hosts would be using personal residential financing tools to operate these properties as a business.

Now the question is: are there enough entire home listings, that are available throughout the year owned by multi-property-hosts?

InsideAirbnb is a tool available for free online that scrapes Airbnb data and makes it available for researchers to analyze. By downloading yearly data for Montreal from 2015 to 2019, and focusing on its short-term rental hotspots (Downtown, the Plateau, Sud-Ouest, Rosemont, etc.) a few observations are clear:

While these numbers are only for Airbnb listings, these numbers indicate that in Montreal, short term rentals have moved from a niche to mainstream. Listings for entire homes in 2019 within the 5 boroughs were almost equivalent to all new condominiums entering the greater Montreal region market in the same year. While there was a decrease in the ratio of entire home listings, the business seems to have become more centralized and veered away from the peer-to-peer model it was intended to serve.

But unlike normal residential mortgage holders, multi-property-hosts consider their assets as investments – not homes. Thus, they treat their residential financing more like commercial mortgages – which usually have higher default rates. Consequently, they might decide to delay, defer or even default on their mortgages payment, not only if they cannot pay, but also if their investments are no longer viable.

One might ask: can 5,700 entire home listings posted by 2,600 hosts on Airbnb put all of Montreal’s housing market at risk?

Maybe not. But it might turn out that it is not only entire home short-term rental owners that rely on the added income to make ends meet.

Sherif Goubran is an architect and PhD candidate in the Individualized Program (INDI) at Concordia University. A Vanier scholar, he also has an MASc in building engineering from Concordia and a BS in architecture from the American University in Cairo. He co-leads a food preservation project on campus and represents graduate students on a number of university committees.