From the frontlines of fermentation: Overseas fieldwork in a natural saké brewery 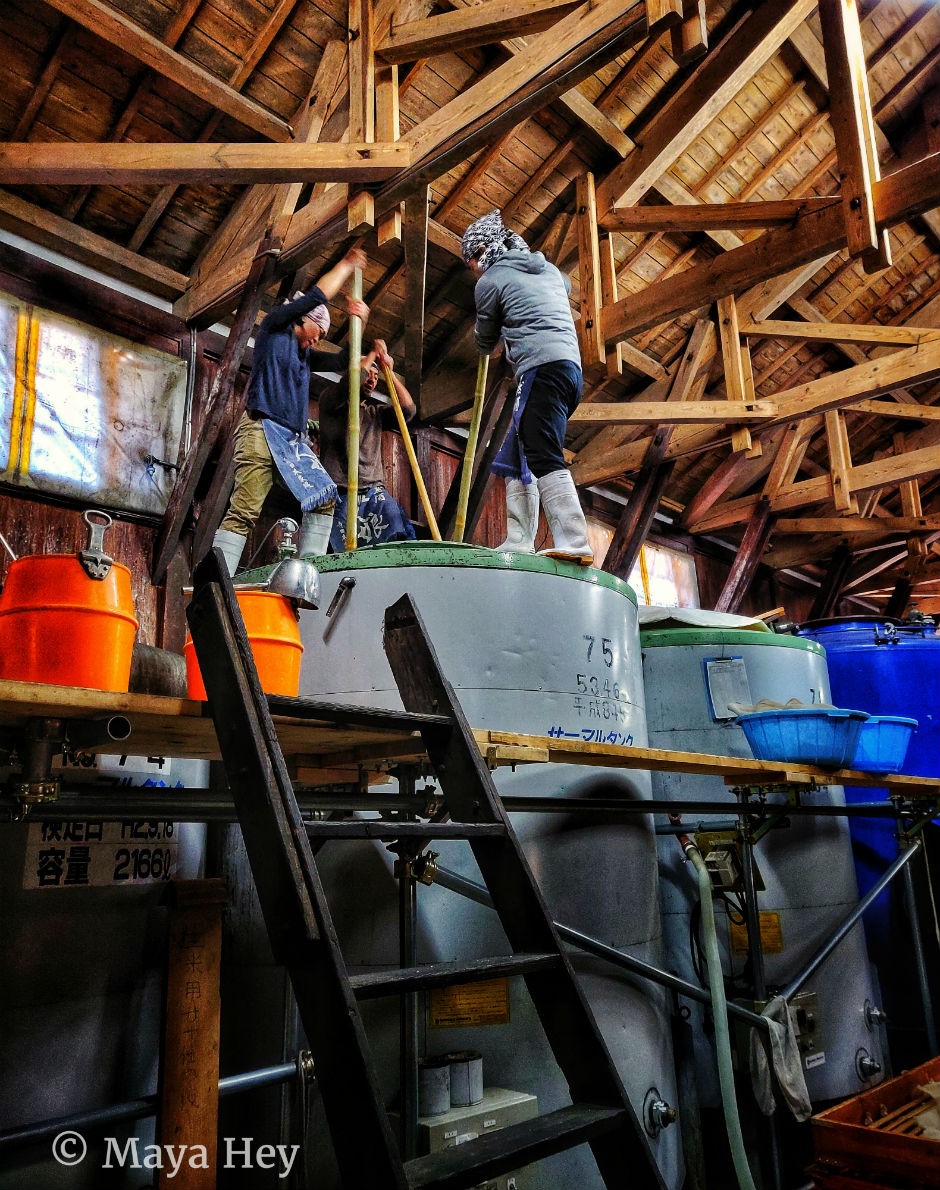 Brewers mashing rice, koji, and ice water to make ginjyou saké at Terada Honké. The brewers mix the final ingredients together and sing to celebrate the end of saké preparation and the beginning of microbial work (i.e. fermentation). Singing was also a way for brewers to measure time — and rhythm — before the advent of stopwatches. | Copyright: Maya Hey, 2019

I am in a small, rural town called Kōzaki — population 6,000 — off the Chiba peninsula just east of Tokyo. Kōzaki prides itself as the Town of Fermentation, with annual festivals to celebrate all things fermented and the invisible labour that goes into transforming such foods.

I work in one of the natural saké breweries called Terada Honké, established in 1673. The brewery sits in the shadow of a small mountain where there is a Shinto shrine that honors its 400-year history of brewing and fermenting.

This is my first of three field sites where I will study fermentation and theorize ways of living with microbial life. As feminist philosopher and physicist Karen Barad writes, “theorizing must be understood as an embodied practice, rather than a spectator sport of matching [words] to preexisting things.”

By working at the brewery, I am immersing myself in the world of fermentation to better understand its logic. My hope is that my experiences here complement the analysis of my dissertation. 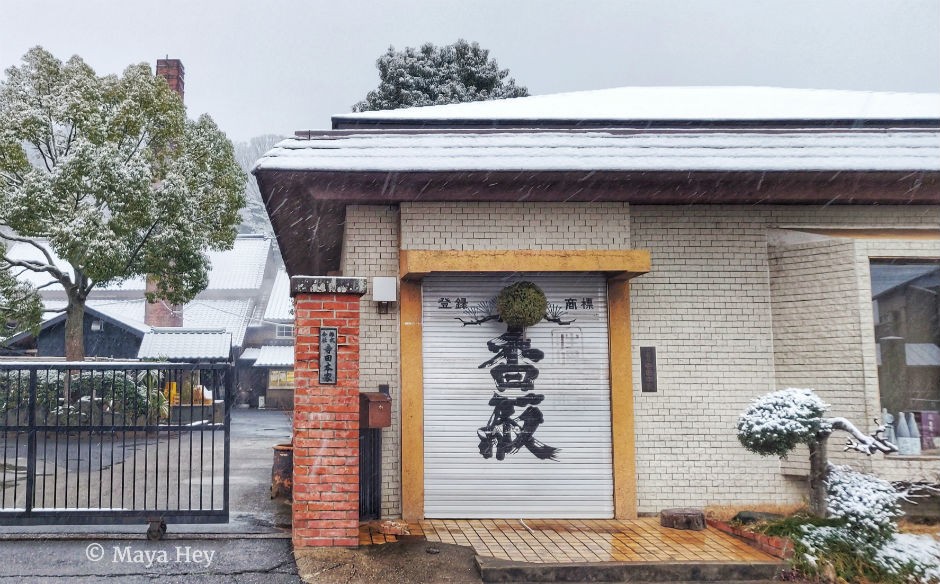 Entry gate to the brewery grounds on a snowy day. The chimney in the background is no longer functional, but it used to direct smoke away from the brewhouse when workers would stoke fires underground to boil water and steam rice. | Copyright: Maya Hey, 2019

English speakers often refer to saké as “rice wine” in part because it’s made entirely from rice. Its preparation is similar to that of beer, though, even when the mashing technique results in a higher alcohol percentage — up to 20 per cent alcohol by volume (ABV). Its preparation deliberately takes place during the winter because the colder climates ward off opportunistic fungi that thrive in summer’s sweltering heat.

At Terada Honké, we take advantage of the outdoor temperatures ranging from 2 to 8°C as the open-air brewhouse functions like a giant refrigerator. Made of impressive wooden beams and faded brick, the brewhouse has doorways and vents designed to let breezes in and to cool off steamed rice.

You can find generations of wear etched into the walls with generations of microbes quietly active in its crevices. Each section of the brewhouse is bustling in a splendid cacophony of sounds: steamers roaring, water splashing, brewers singing, forklifts whirring.

It is 6:50 a.m. and the roosters are getting restless.

The workday begins as the sun rises. One by one, the brewers start to enter the brewery grounds with hands in their pockets and their shoulders hunched over. Our uniforms still allow for personality to shine through, mostly in our choice of tenugui head coverings: we all wear white rubber boots, we all don aprons with the brewery’s logo and our colour palette stays in the indigo hue.

When we walk inside the brewery, our breath is white and later becomes indistinguishable with the steam used to sterilize the tools of the trade. A quick morning briefing and we scatter amidst the brewhouse like asteroids: some go to aerate the yeast starters, some load the steaming basket, some start to wash rice for the next day’s steaming. Yesterday, we steamed a metric ton of rice.

We reconvene when the steaming is complete and we yank the cover to the steaming basket to the side. Bellows of steam waft up into the rafters and out the brewhouse vents. Now, our collective task is to divide the piping-hot rice for one of three trajectories: rice to propagate wild yeasts, rice for the yeasts to ferment into alcohol and rice to inoculate koji.

The case of brown rice koji

Many Japanese ferments begin with koji, including miso, soy sauce and saké. Koji, aspergillus oryzae, is a fungal starter loaded with enzymes that break down the starches in rice. One of the tasks we undertake on a semi-weekly basis is preparing brown rice koji which becomes the starting ingredient for brown rice saké, one of Terada Honké’s specialties.

The koji room — called the koji-muro — is the only space inside the brewery that is both temperature and humidity controlled. The room’s temperature is a balmy 38.5°C, which, in human terms, would be like a mild fever. The room is lined with wood — which doesn’t absorb the heat — and there are six windows on the ceiling, each the size of a CD case, that remain closed for the duration of our work.

Even before my hands dive into the brown rice in front of me, I can feel droplets of sweat run down my back. 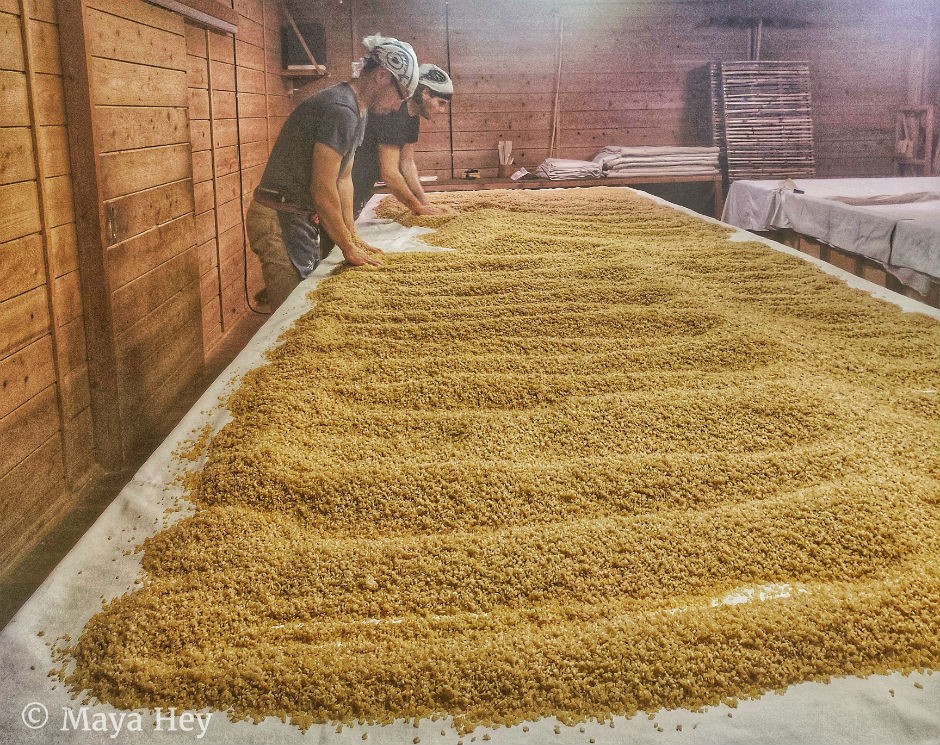 Heat, sweat and humidity inside the koji-muro for inoculating brown rice koji. Since koji is a mould, it thrives best in warm, humid and dark environments. | Copyright: Maya Hey, 2019

On top of a long wooden table lies 180 kilograms of steamed brown rice, sitting at 41℃. The initial steps to koji-making are three-fold and they seem deceivingly simple: cool the rice, add the koji spores, then mix to cool again. But here is the catch — we must cool the rice down to 35℃ in a room with no air flow that is set to a higher temperature (38.5℃) than our target.

How do we do it then?

We mix the rice by hand so that it cools uniformly — many breweries use fans, but fans also mix dust into the rice which compromises the final flavor. By interacting with the air, the rice cools down in an environment that is significantly warmer than itself, creating ideal conditions for the koji-spores to develop their enzymes and multiply.

We rake the brown rice by hand, back and forth as if rowing an invisible oar. Heads down, we rake and rake until two temperature probes read 35℃. Then we inoculate the rice and continue mixing until the temperature reaches 32℃. We work 90 minutes straight because we don’t want to risk the rice temperature heating back up.

When we finish, exiting the koji-room places me back into the frigid brewhouse open to the outdoor elements. Steam rises from our skin. But our reprieve is short-lived once our sweat cools to the ambient temperature of winter. One of the brewers comments that my cheekbones look like two little apples, but my teeth start to chatter as I fumble for my jacket.

Fermentation and the ergonomics of microbial life

Terada Honké follows a unique fermentation logic of “seeing from the perspective of microbes” instead of doing what is convenient for the human brewers. Part of this mentality views the brewers as being a supportive role to the microbes that do the actual work of transforming rice into saké.

“We are just the helpers,” said one brewer. “Our job is to help the microbes do their work.”

This logic seeped into my pores when making the brown rice koji, for the conditions in the balmy koji-muro were not meant for my body to work; instead, the room and our task was to encourage microbial bodies to thrive and multiply.

Opening the small ceiling windows or cooling down the brown rice with fans may be efficient to humans, but doing so would lower the temperatures too drastically and prevent the microbes from penetrating the rice kernel and making optimal koji. No koji means no enzymes, and without any enzymes, rice will not ferment into saké. 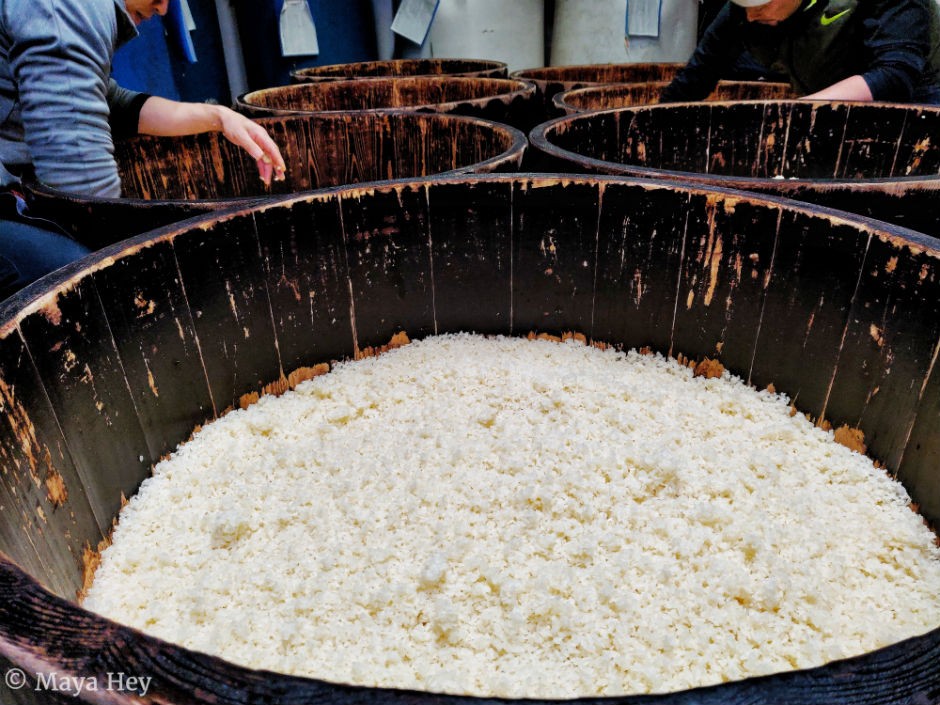 Brewers working by hand to ensure that steamed rice does not clump together. Small details like this matter when trying to set up ergonomic conditions for microbial life. | Copyright: Maya Hey, 2019

As a natural saké brewery, Terada Honké follows a hands-off approach to let fermentation happen as opposed to manipulating and forcing each one of its steps. It is precisely because of this “letting” that brewers complete most tasks by hand. Whereas automation carries out a known protocol to completion, unpredictable microbes and variable weather impact fermentation. Fermentation is the very stuff of working with — not on — microbial life.

My time at Terada Honké thus far has exposed me to the ergonomics of working with microbial life. We arrange ingredients, equipment and peoples in ways that make fermentation both efficient and safe. The design behind everything in the brewhouse sets up encounters with microbial life so that fermentation can — and continues to — happen.

My next — and final blog post as a public scholar — will focus on their safety protocols and collective ethics. There are no chemical sanitizers at Terada Honké, which goes against the Pasteurian rhetoric of microbes as latent threat.

In the meantime, I’d love to answer questions should any arise from reading this post. Tweet me @heymayahey and let’s keep this conversation alive!