All the excellence
|
By Amir Hooshiar 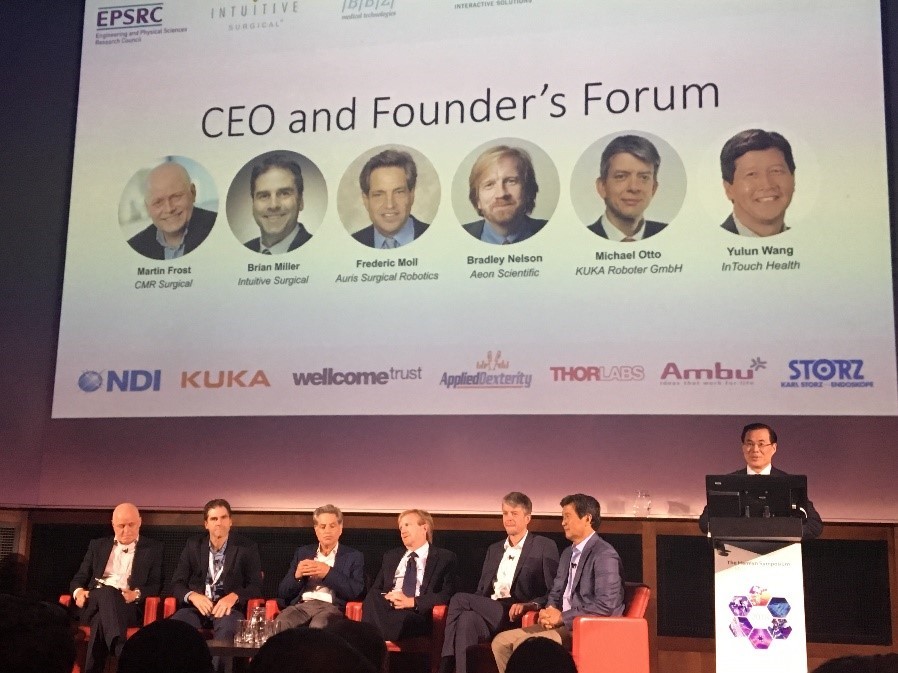 I took this picture on June 26, 2018, during the Hamlyn Symposium on Medical Robotics, held at Imperial College London, UK. I see all the excellence of world robotic surgery in this picture. At the moment I shot this picture, professor Guang-Zhong Yang of Imperial College London (standing at the mic), who is a pioneer researcher in the field of surgical robots and editor of Science Robotics Journal, was opening the forum by introducing panel members to the audience.

Among the folks in the panel, there was Frederic Moll, co-founder of Intuitive Surgical (1999), which launched the first-ever FDA-cleared and most-successful surgical robot, da Vinci, in 2003. Meanwhile, he co-founded Hansen Medical Inc. for cardiovascular surgical interventions (see how its Magellan Robotic System works). He later started Auris Surgical Robotics Inc., which recently launched the first transluminal surgical robot for lung surgeries, Monarch Platform. He also had a board position in MAKO Surgical until its acquisition by Stryker Corp. No wonder why he is also known as the Father of Robotic Surgery worldwide!

Yulun Wang, who presided the Computer Motion Inc. (acquired by Intuitive Surgical), developed the ZEUS surgical robot, by which the first transatlantic robotic surgery was performed.

Also sitting there was Bradley Nelson, a world-class professor at ETH Zurich, Switzerland, and entrepreneur, co-founder of aeon-scientific. His team invented the first intracardiac steerable catheter which has been super successful in treating cardiac arrhythmia.

Next to him was Michael Otto, CEO of KUKA Roboter GmbH, whose company motto is: “Surgical robots for everyone everywhere.”

Martin Frost of CMR Surgical announced their shy Versius surgical robot is made to make robotic surgery accessible to millions of people worldwide. This statement might be good news that we finally could have a more affordable surgical robot available in the market; however, you never know until it makes its way to the market. Let’s cross our fingers for it.

The companies I mentioned above have developed more than 90 per cent of the robotic surgery industry in the world. I think now you would appreciate why I saw nothing but excellence on the scene. Below is me having my first hands-on with the da Vinci robot during the Hamlyn Symposium on Medical Robots (HSMR18), London, UK. 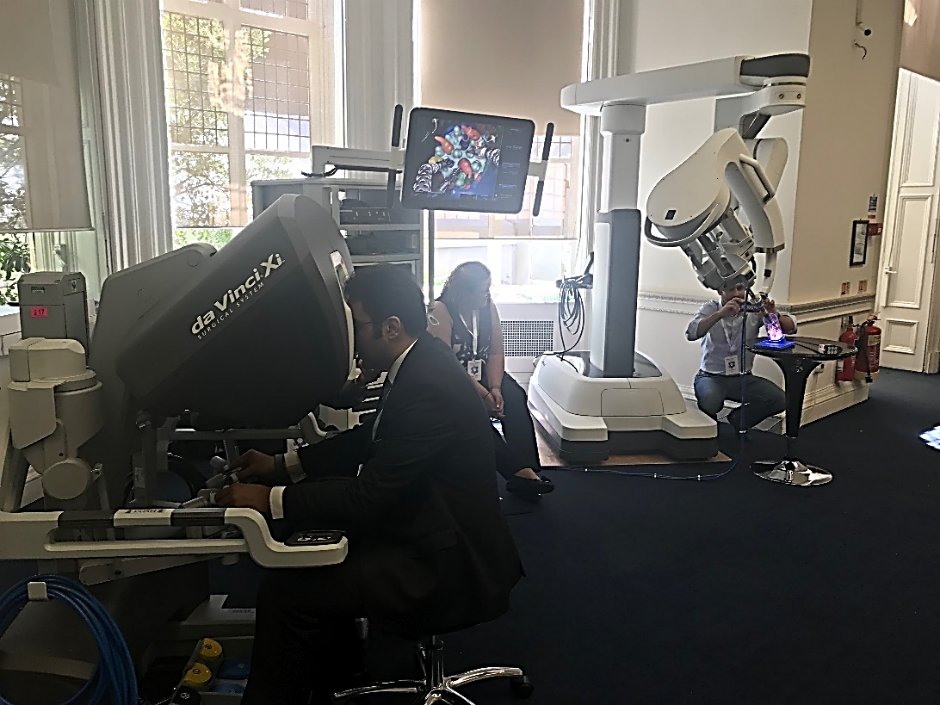 How successful are robotic surgeries?

Robots have made their way into almost every medical specialty; however, the degree of success and failure of attaining their intended goals are different in various surgeries. To clarify more, I prepared the table below. In the table, I have listed the most reported robotic surgeries, their worldwide accessibility, and the level of success of the robotic system. Also, I have listed the main advantages and limitations of surgical robots in each category. The contents of this table reflect my opinion for the public based on my experiences and study. One might find a discrepancy on each criterion in other published materials. You should always consult your physician for her/his professional opinion on this matter.

In conclusion, I should say robotic solutions have offered reliable and significant benefits to patients and surgeons in almost every medical specialty; however, this technology has not been globally accessible. The reasons might be, but not limited to, regulatory restrictions, capital investment needed, physicians' conservatism, patients’ safety concerns, insufficient/undefined policies for reimbursement, etc.

Amir Hooshiar received his Bachelor's and Master's in Biomedical Engineering with Honours from Amirkabir University of Tehran, Iran. He served as a Certified Medical Devices Expert for nine years before joining Concordia. Amir is a Vanier Scholar and the recipient of the prestigious NSERC Gilles-Brassard Doctoral Prize for Interdisciplinary Research in 2018. His doctoral research is under supervision of Dr. J. Dargahi on recreating tactile sensing and haptic feedback for surgeons during robot-assisted cardiovascular interventional surgery.