In this month's newsletter: 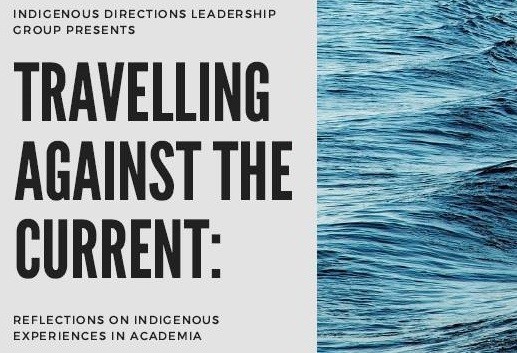 The purpose of the panel series is to provide visibility for the Indigenous community at Concordia and to share the unique obstacles we encounter in and outside of the classroom. This panel series is also to share the many ways we have found the support needed to overcome these obstacles, weather it be through the Aboriginal Resource Center, mentorship, research, or activism, etc. This will allow other current and potential Indigenous students to become more acquainted with these support networks so that they may be better equipped as they continue travelling through academia.

Elizabeth Fast has Métis and Mennonite ancestry and was born in St. François-Xavier, Manitoba. She is a community-based researcher with two decades of experience working in social service organizations and community settings that focus on child welfare issues in Québec and across Canada. Her research focuses on Indigenous youth, with a particular focus on understanding of the cultural needs of Indigenous youth raised outside of their biological families or disconnected from their cultural roots.

Cherry Smiley is from the Nlaka’pamux (Thompson) and Diné (Navajo) Nations. From B.C., she is a feminist activist and artist and is currently a Trudeau Scholar and PhD student in Concordia’s Department of Communication Studies. She has nearly a decade of experience working with Indigenous women and girls in different capacities, including as a front-line anti-violence worker at a transition house and rape crisis centre, assisting in the coordination of an anti-violence group for Indigenous girls, and as a project manager in violence prevention and safety for the Native Women’s Association of Canada. Cherry’s research, through the creation of a documentary, focuses on ending sexualized male violence against Indigenous women and girls in Canada.

For more information, visit the event page on Facebook:
Travelling Against the Current Panel Series 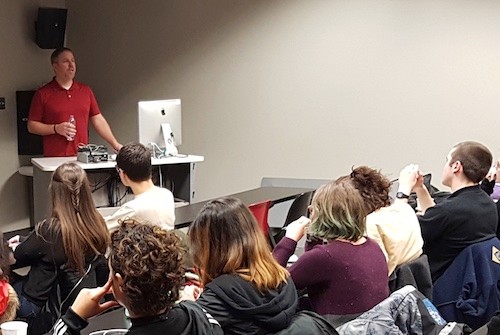 Steve Bonspiel addresses a class of first year Concordia journalism students. He is the Journalism Department’s second ever journalist in residence, and will be working with a handful of students in their final year on a project of their choosing. Steve, who identifies as being a member of the Mohawk Nation, is the editor and publisher of the Eastern Door - an award-winning community newspaper based in Kahnawake.

The Journalism department at Concordia has maintained ties with the Eastern Door and the community of Kahnawake for more than ten years. Through an on going series of internships, Journalism students get practical experience as reporters and editors covering weekly news in Kahnawake and Kanesatake.

“Internships like this are good because then you produce journalists like our assistant editor Daniel J. Rowe, or people like Christopher Curtis who covers Indigenous issues for the Montreal Gazette. You produce people who challenge themselves to be better journalists and better people,” says Steve, who points out that the last two assistant editors at the Eastern Door were Concordia journalism grads who began their careers interning at the newspaper. “If we didn’t have this internship program I never would have met them. They helped me, they came in and filled a role, they made themselves important. Daniel worked up to being an assistant editor, he knew nothing about the community when he came in and now whenever he’s in Kahnawake people want to talk to him, they want to tell their stories to him. It’s beneficial for both the Eastern Door and Concordia and the students we both work with.”

These internships are valuable, because they help this small community newspaper deliver ongoing coverage of the matters that are important to the community. They have also helped to educate up and coming journalists about the realities of Indigenous communities.

“Even today, speaking with the first year journalism students; they’re curious they want to know more they’re hungry for information about Indigenous People and I think that the journalism program’s internship programs need to keep going,” Steve explains. “It has to evolve it has to expand and become something else, maybe grow into other communities, or other departments can adopt similar internship programs.”

Now, working as journalist in residence, Steve is taking on a project with six journalism students that is important to him, and to the communities served by the Eastern Door. He sees this as an opportunity to help the communities and inform the broader public at large.

“It was quickly determined the Mohawk language will be the focus of the project, and now it’s just a question of what the scope is going to be,” says Steve. “I had this project with the language in my mind and I wanted to see how the students would react. When I threw it out to them they loved it.”

The students will be working with Steve to create a variety of media - print, video and radio - for mainstream and Indigenous news organizations. The stories they produce will focus on how people in Kahnawake and Kanesatake are fighting to promote and preserve their language. He believes it is a chance for people in his community to see what is important to them reflected in the media outside of the Eastern Door, and as a chance for these journalists to start their careers armed with knowledge about Indigenous People.

Profile and photo by Ossie Michelin