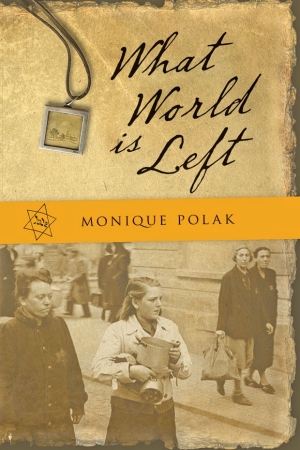 What World is Left, published by Orca Book Publishers, 2008, is excerpted here with permission of the author.

Just when I think things cannot get any worse, I hear a loud whirring in the air. “German airplanes!” someone shouts. “Bombers!”

Bombers? Why would the Nazis send bombers now?

We crouch together on the wet ground, crying and shaking. The fear eats at my insides like a parasite, hollowing me out until it feels as if there is nothing left of me. Except pure fear. Pure cold fear.

The airplanes dip down over the field like hawks swooping in on their prey. One comes so close I can feel the wind of its wings and hear the screws on the wings rattle. The noise of the engines is almost too much to bear. A woman near me screams, but I can’t hear her over the engines. I can only see her mouth open in terror.

I try to block the sound by covering my ears. But it doesn’t help. Surely, they are going to kill us. Is this, I wonder, how my life will end? Just like that — without any final words or ceremony of any kind? I try to think of Franticek. I try to remember his kiss, but the fear is too big. It’s swallowing me whole.

Now there is another plane coming toward me, headed right for where I am crouched on the ground. I flatten myself against the earth. Mother and Theo are with me, but all I can feel is my own heart beating.

Then, just like that, the airplanes take off, disappearing into the night sky as quickly as they came. My ears are still ringing. “It was just a way to frighten us,” Frau Davidels whispers.

The night grows even darker. But wherever I look, I see the dim outlines of people.

“I heard one of the Nazis say there are already three hundred dead,” a voice whispers. Some of the dead are elderly, too weak to last through the second census count. Some are trampled by the crowd. Some give up. The rest are shot.

When we file past the bodies, we turn our heads away. It is a sign of respect, but I know, too, that not to look at them is also a sign of cowardice. I don’t have the courage to look at the corpses, to see their faces. It is too easy to imagine myself there with them on the wet grass.

At about four in the morning, an old man with a gray beard pushes his way through the crowd. “What do you want, old man?” someone asks. “Don’t draw attention to yourself or they’ll shoot you. Just like they did to that poor woman before.”

When the old man turns toward us, I notice his eyes are bright blue. “I’m not afraid of being shot. Besides, I have something to tell you...a message you need to pass on to the others waiting in line.”

“He’s probably senile,” a woman’s voice calls out. “What does he know?”

“Hush,” Fraulein Davidels tells the woman. “Don’t you know who the old man is?”

“Why should I know him?” the woman answers.

“What do rabbis know?” the woman continues. “It’s because of them and their religion we’re in this mess.”

“What is it you want to tell us, Rabbi Baeck?” Frau Davidels asks, raising her voice.

“Look up ahead,” he says. We all look up ahead at the mass of bodies milling in front of us. “Do you see the stars?”

I look up at the sky, but the rabbi is wrong, there are no stars. Not one. Perhaps the stars witnessed what went on here tonight and decided not to shine.

Other people look up. When Rabbi Baeck speaks again, his voice sounds less patient. “Not up in the sky. Ahead of you.”

And suddenly I understand what Rabbi Baeck is talking about. Up ahead, extending all the way to the horizon, are row after row of stars. Yellow ones — the stars we are forced to wear on our shirts and jackets.

“The stars meant to humiliate us Jews provide illumination in the gloom. They’re a sign,” Rabbi Baeck says.

“A sign of what?” the same woman who sounded so angry before asks.