‘I’ve easily hired 50-60 Concordia grads’: how one engineering alum found a better way to do business 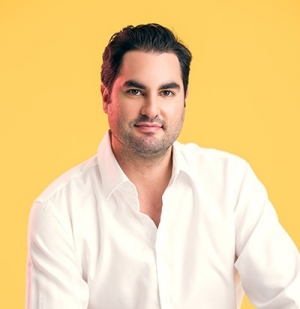 As founder and CEO of Diff, Crudo hires Concordia grads with unique skill sets and perspectives in the pursuit of a singular goal: better e-commerce.

When Benjamin Crudo, BEng 12, talks about his work you can hear the enthusiasm in his voice. The software engineer, who combined his love of retail and computer science to start a company that provides retailers with a better way to do business, has found his true calling.

Working in his family business – Jeans Experts Canada Inc., a chain of retail stores selling jeans – from a young age, and dabbling in all aspects of retail, from managing the warehouse, selling on the shop floor, forecasting purchasing and analyzing sales data, Crudo thought the natural progression would be to eventually take over the business. But life had other plans and he became enamoured of computers.

“We had a bad point-of-sale system,” he says, “and I had all these ideas I wanted to implement to improve things but didn’t know how. I started realizing that I was more interested in computers than jeans and I decided that it was time for a formal education in how to master the technology of the retail business.”

Crudo enrolled at Concordia in the Software Engineering Program with a focus on web-application development. In 2011, he founded Diff, a consulting company that specializes in e-commerce.

CEO of a successful e-commerce company

With more than 85 employees, three offices worldwide and as one of the world’s top Shopify partners, Diff plans, designs, builds, integrates and optimizes e-commerce products to drive success online for its clients. Crudo takes great pride in the service, success and growth of the Diff team, and in the agency’s position as one of “Canada’s Great Places to Work.”

His extensive retail expertise, combined with a software engineering degree and specialization in web development, has enabled him to build a company that can demystify e-commerce for his customers and help them succeed. Crudo attributes much of his own success to his Concordia education.

Building a solid foundation at Concordia

“I benefited tremendously from the education that I received there,” he says. “It’s a fantastic school in so many regards.” Crudo particularly remembers Professor Terry Fancott, the Computer Science and Software Engineering program’s director. “I call him the Grandfather of Software Engineering,” he says. “He and many other professors at the department were extraordinarily supportive and inspiring figures in so many ways.”

Crudo has such confidence in his alma mater’s ability to produce competent and well-rounded software engineers that he’s now the largest employer of the graduating class of 2012.

“I had this silly idea that I would graduate and start a company and hire people from my program” he says. “It turns out that’s exactly what I did.”

He continues to remain very loyal to Concordia, mentoring many of its computer science students, welcoming them on as interns, and looks to the school’s program to routinely hire employees.

“I’ve easily hired 50-60 Concordia graduates over the years,” he says, “and as we consider taking on more people, we have a really good sense of what they’ve been taught there. It’s given us a consistent base for what to expect from them in terms of performance.”