Drama: Picking the Under, by Justin Hebert

Every year, Concordia’s Department of English honours students with prizes, awards and scholarships for their work in English literature, creative writing and drama.

In spring 2018, the English Department Drama Award, worth $300, was presented to second-year student Justin Hebert for his piece Picking the Under. The prize is given to a currently registered undergraduate student who demonstrates excellence in drama writing. 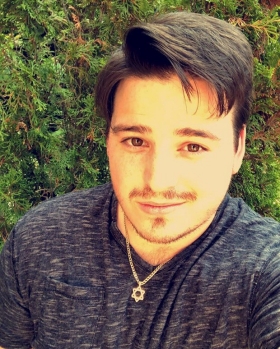 “It’s just a relief to have people who are reputable in this field of work acknowledge your writing, tell you that you’re good and that you have a lot of potential in, basically, your dream field of work,” he says.

Hebert’s drama explores the complicated nature of family. “It’s about the relationship between a young, troubled, violent son and his estranged father, and how they’ve been forced under unfortunate circumstances to live together again,” he says. “It’s about the conflict that arises from that forced living situation. And it’s about addiction, largely, and gambling and substance abuse.”

Although the plot may sound dark, Hebert says it’s a little bit more lighthearted than one would expect. “It’s not too dark — it’s more of a dark comedy than anything, if you can imagine,” he says.

Hebert is majoring in creative writing at Concordia and hopes to pursue a career in writing for the screen. “I ideally want to go into screenwriting, working in television or film,” he says.

After a summer internship at a video production company, Hebert is one step closer to achieving his goal. “For my internship, I did the storyboarding and scriptwriting. It’s definitely a foot in the door and having a little bit of background in playwriting definitely helps in terms of actually throwing a script together, understanding dialogue and understanding space,” he says.

“It’s all been extremely helpful and I am extremely grateful to Concordia for offering the program.”

Picking the Under
by Justin Hebert

Mike and Tom, two men in their late 50s, are at their favourite dive bar on a Saturday night to watch the Canadiens play, as they have ever since they were young men. The Brass Clover is ominously quiet and desolate. Tom is drunk and giddy. However, Mike is visibly troubled, reflecting on how to deal with his complicated situation at home. Time runs out in the game, the buzzer sounds and, once again, the Canadiens lose.

Mike: They don’t get much luckier than me, eh?

He hands over a few hundred-dollar bills to Tom, who counts the money with a grin as he takes out his pocket book and scribbles a few numbers into it.

Tom: Know what this place always reminds me of? The fellas from back in the day, with their fancy threads and their shiny shoes. They’d all come to my spot, and boy they loved my Bolognese. Practically drank the stuff. No matter how busy, they always made time for me. I mean, they came for the drop, but they stayed for the Bolognese. It’s like science; the ratio of pork to beef to veal, and you gotta add just the right amount of sugar to balance the saltiness. Then, you know, one day this pesky bastard comes in and says he works for the something de la santé, says I got pellets in the kitchen, so I say…

Mike: Do you have to tell this story every time?

Tom: As a matter of fact, yes I do. So… I say, “What pellets?” He says it means rat shit. I say, “Fuck you, you’re rat shit.” He gets all high and mighty on me, tells me how I can’t talk to him that way, and he threatens to report me. One thing leads to another and I break his cheekbone with a rolling pin. Fourteen stitches. Can you believe that? Fourteen stitches, as if that means something. Five years go by while I’m locked up in Bordeaux and my kids finish high school without me and everyone forgets about my Bolognese.

Mike: So? Is there ever a point to this story?

Tom: Sure there is. My point, Mike, is that you and me got the same problem.

Mike: How the hell is losing money on sports the same as going away for assault and battery?

Tom: Well, Dr. Smarty Pants, if you must know, you and me got what they call in AA a “tendency for self-destructive behaviours,” or some bull. Not to mention other stuff.

Mike: I don’t see how the two are related, but hell… maybe you’re right.

Mike finishes the remaining sips of his beer, and buries his face in his arms.

Tom: You know, Mike, if I knew you were gonna be so sour I woulda just called it a night after the second period. What’s on your mind?

Mike: Nothing. Forget about it. Just some stuff I’m trying to sort out.

Tom stumbles closer to Mike, nearly falling off his chair, and puts his big, plump hand on Mike’s shoulder.

Tom: Mikey my boy, after 40 years of being thick as thieves, I hope you think of me as your best friend and not just your bookie. My second wife always said I was a pretty good listener.

Tom motions his hand as if he were a priest, drawing an invisible cross on Mike.

Tom: Please, tell me your troubles, my son.

Mike: I don’t know… it’s just… it’s tough. Readjusting to living at home again. Joanne agreed to move in with her boyfriend so that I could be closer to Jay, but everyone seems kinda bitter about the whole thing and now I just feel guilty all the time. Jay looks at me as if I’m the Antichrist. Like I messed everything up all over again. And on top of that, my doctor tells me that my blood pressure is too high and he wants me to come in for a whole bunch of tests that I just can’t find the time for. Also, I know this sounds weird, but do you think I look fat?

Tom: (Teasingly) I think you’re beautiful, Mike. But I ain’t exactly Fabio with this gut, so I can’t really comment. You should see my shrink, though. I don’t buy into all the brainy witchcraft, but it’s nice to have a smart person to talk to about this kinda stuff. Great ass, too.

Mike: It’s not my fault. I’m a dentist; we tend to sit a lot. Sit for work, sit to read, watch TV, that kind of thing. Joanne calls it “the new smoking.” I’ve never smoked a day in my life, but she did. She says she doesn’t anymore but I see it on her teeth. Dentists notice that stuff. Still, sitting is the new smoking. And then it’s other stuff:

“You can always walk the dogs when you’re bored,” she says. “I walk them in the morning.”

“This isn’t about me. I do yoga four times a week.”

A beat. Mike stares at his empty glass.

Mike: I’m glad she still cares about my health though, being my ex-wife and all. But I don’t know, I just feel like I don’t look good, I look 56. I mean, I am 56, but you’re not supposed to look 56 when you’re 56. You’re supposed to look 45. It’s age politics. Nobody hands out flyers around the neighbourhood or hosts a candlelight vigil for the dead 56 year old.

Tom: You know… smoking ain’t that bad for you. Doctors are running a racket on this whole cancer thing. I’ve been smoking since I was nine. That’s like… like… a lot of years! And I feel healthy as a horse.

Tom shoots back a look of adorable confusion, visibly trying to do the math with his fingers.

Tom: How the hell you know that?

Tom: You remember what you learned in the first grade? I sure don’t.

Mike clutches at his chest and tries to massage out a sudden pain.

Mike: Oh god, I feel like I’m going to be sick.

Tom: Yeah, well, that’s what you get for not smoking. Can’t beat that irony.

Mike looks at him unamused.

Tom: If it makes you feel any better, my old man used to tell me that you ain’t truly a man in this world until you’ve had your first kid, your first heart attack, and your wife tries to stab you in your sleep. Or I guess, in your case, your ex-wife.

Mike: I’ve already got one down. At this rate, I’ll probably earn the next two in the coming month. Let’s settle the tab. I gotta head out. I need to be up early tomorrow. I promised Joanne I’d pick up her dry cleaning and walk the dogs before I leave for the office.

Tom: You crack me up, bud. Not only does your wife bang some other dude and then kick you out of the house, she’s still got you on a tight enough leash to pick up her dry cleaning? Leave me your e-mail, I’ll send you the info to a good doctor who can reattach your balls for you.

Mike: Hey! That’s not how it is! She didn’t kick me out. We have an arrangement, OK? It’s a lot more complicated than you think.

Tom: Being locked up in Canada is a lot like summer camp, only a little less boring and a little less dangerous. And you know, while I was in they had me doing kitchen duty some odd days a week, cleaning dishes ’n spoons ’n whatnot. Anyway, the more dishes I did the more I realized there’s no way around doing ’em right. No shortcuts. No scams. You can half ass ’em but it won’t make ’em as clean. You can feel the grime when they ain’t been washed right. More and more you realize that’s how life works sometimes. Like marriage. That shit’s like dishes, man. No shortcuts. No tricks. You put in the work and you be good and you’ll have shiny glasses and a nice empty sink. You cut corners, and the grime will start to build up on you. Nobody wants a kitchen with dirty dishes in it, makes people uneasy. We both cut corners, Mike. That’s why we’re sitting here while they’re out getting fucked ’n well fed by the better versions of us.

Mike stares at him for a moment in awe.

Mike: (sarcastically) Gee, Tommy. You got a real way with words. What was that, T.S. Eliot?

Tom: I dunno, I don’t follow politics. Anyway, if you want my professional opinion, I think all the blues you’re feeling has got to do with losing. And you wanna know what the best medicine for that is? Doubling up on football, and tomorrow just happens to be Sunday, or as I call it, weekly Christmas. The Dallas Cowboys, America’s Team, are an absolute lock against Cleveland. You want a piece of the action?

Tom: Again? Jesus. The Chargers have been helping you pay my mortgage all season. But, if you insist, I won’t stop you…

Tom: Lucky? Nobody’s lucky these days. Look at the Habs. Your old man would be rolling in his grave if he could see them now. We’re practically the Soviet Union on Ice.

Mike: Yeah, I suppose he would.

Tom: You ever miss him?

Tom doesn’t say anything. A beat.

Mike: I don’t miss the bad shit, if that’s what you mean.

Tom puts his hand on Mike’s shoulder and smiles.

Tom: Yeah, I miss my old man, too. Couldn’t throw a half-decent punch near the end anyway, not with the shakes and all.

He holds up his empty beer glass.

Tom: To the old bastards of the world. Cheers.