Queer Concordia graduates lend their voices to the community

In the final segment of the three-part series, meet four self-identified and proud LGBTQ alumni who tap into their experience and knowledge to advance theatre, sustainable development and trans education
|
By Richard Burnett
Source: Advancement and Alumni Relations 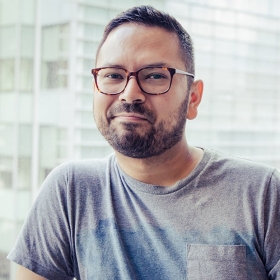 As social media collaborator for Montreal’s Centaur Theatre Company, Orlando López has promoted plays including last season’s Hosanna by Michel Tremblay and will do so again for the upcoming Choir Boy by Tarell Alvin McCrane. | Photo: Concordia University

Orlando Lopez, BFA (film studies) 13, is the social media collaborator for the oldest English-language theatre company in Montreal, Centaur Theatre Company, as well the social media director for Brave New Productions. Both companies have presented many queer-themed productions in recent years and Lopez has been there on the ground, helping promote the shows to both queer and straight audiences.

Orlando López: “I am preparing for the upcoming new season at Centaur, notably Choir Boy, which opens on October 9. It was written by openly gay playwright Tarell Alvin McCraney. He also co-scripted the 2016 Oscar-winning film Moonlight, which was based on his own play In Moonlight Black Boys Look Blue.

I am very proud to be working on this show, as I was to work on Michel Tremblay’s queer-themed Hosanna, remounted by Montreal’s Tableau D’Hôte Theatre last season. Then during Montreal Pride this summer, I worked on the Canadian premiere of Tony-nominated playwright Martin Sherman’s 2017 off-Broadway show Gently Down the Stream, which was produced by Brave New Productions.

These plays show how far we have come as a community.”

What does being part of the LGBTQ community mean to you and how does it play into your work?

OL: “We all need to see our lives reflected on the stage. As an out and proud gay man, I feel privileged to work on these gay-themed productions because representation matters.”

OL: “School can be tough but my Concordia experience was excellent. I met teachers and friends who really shaped my life. I joined the Concordia Out Collective, where I eventually became co-president. We renamed it the Concordia Queer Union and reinvigorated that safe space. I learned a lot, in class and about queer activism.

One year, I hoped to see a person of colour on the cover of The Link newspaper’s queer issue. So I successfully pitched the idea to have two guys kissing on the cover. My friend Colin and I necked for a 20-minute photo shoot — and that made the cover. That was a win. That made me happy.” 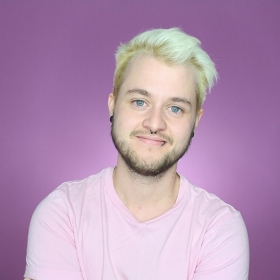 Chase Ross is a trans activist and YouTube contributor who regularly speaks at universities and LGBTQ community centres.

As Ross notes on his uppercasechase.com website, “In 2006, I realized I was trans and decided to document every part of my transition. Pictures, videos, voice clips, you name it, I did it. I started hormones in 2010 at the age of 19 and started a project that is still going on today.”

Named FTM Magazine’s Athlete of the Year for 2015, Ross continues to speak out about transgender issues on social media and at public speaking engagements around the world.

Chase Ross: “I have been working on my YouTube channel for the past 12 years or so. I also do a podcast and am currently writing a book — serious and funny stories about my transition.

I’ve done 18 public-speaking engagements so far this year and have two more in October. I usually speak at universities and LGBTQ community centres, and the reactions are amazing, from folks who have never met a trans person to young trans people just coming out.

It is very rewarding to see all of these people, to be able to help people and put a face on transition.”

CR: “I do feel part of a community, but I also feel like I’ve created a community within my channel because there weren’t many trans YouTubers before I came along in 2006. I was part of that first wave, and it has exploded since.

It’s been amazing to see how trans visibility has grown. Being a part of the LGBTQ community has influenced everything in my life, from papers I wrote in high school to my master’s thesis. It’s been really cool to bring my YouTube life into my academic life.”

CR: “Concordia was great but a little nightmary at the beginning, because back then there was nothing in place to change your name, that kind of stuff. But I was in sociology, so I had no issues with any of my professors. Everybody was on board.

I had heard horror stories about other universities, where teachers wouldn’t respect pronouns and that kind of stuff. But I felt welcome at Concordia. I felt lucky that I was at Concordia.” 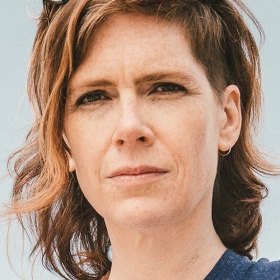 Parry recently co-authored Gertrude and Alice, about queer icons Gertrude Stein and Alice B. Toklas. The play opens the 2018-19 season at Buddies, with Parry in the role of Gertrude Stein.

Previously, she was director of the Buddies Young Creators Unit (now Emerging Creators Unit), where she helped develop new theatrical works by young queer artists such as Waawaate Fobister and Jordan Tannahill.

Evalyn Parry: “For the last three years I have been the artistic director of Buddies, which has the distinction of being the largest-venued and longest-running queer-theatre company in the world. Our season opens with Gertrude and Alice, on stage from September 15 to October 7.”

EP: “It has been a defining part of who I am as an artist, both in terms of queer identity as a person and also as a person who has always been drawn to experimental and boundary-pushing works that delve into territory that is adventurous, new and outside the norm.

This work is gives me great satisfaction. In my role here as artistic director, I love working with queer artists and the creative community at large. Theatre is powerful tool for telling queer stories and pushing conversations.”

EP: “It was a long time ago! It was formative. I made connections with people I am still in touch with in my creative world. It was very influential — I was a theatre major, but I also took a lot of queer courses as electives, which were a real introduction for me to queer culture. It was terrifying and inspiring. It was a special time.”

Elie Chivi: Making a difference around the world 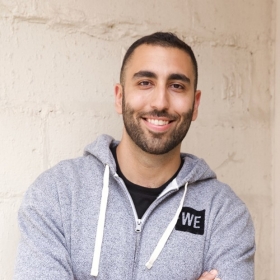 Among his other student activities at Concordia, Elie Chivi served as VP of communications for the Concordia Student Union in 2008-09.

Elie Chivi: “I am the director of sponsorship activation for WE Day, which is part of WE Charity, where I’ve been working for over five years. WE Charity is an international charity that partners with communities through a holistic, sustainable development model that equips families with the tools and skills they need to lift themselves out of poverty.

WE Day, more specifically, is a series of live events that honour change-makers and people who are making a difference around the world. It’s a powerful experience with world-renowned speakers and performers, mixed with real inspirational stories of change.”

EC: “I was raised in quite a homophobic environment in the Middle East, and I think dealing with homophobia builds resilience in most queer people within our community. This resilience is something I carry every day, and it’s the reason I can hold my head up high no matter what I’m facing in life.

I am very outspoken about queer issues in the workplace, whether it be about more inclusive messaging at our events, making sure language is neutral, advocating for queer stories to be represented on stage or simply just being a visible member of the community — and also being Middle Eastern. These days, just being visible is a political act.”

EC: “Crazy! I was there from 2003 to 2009 and was quite active on campus. I was president of the International Students Association and VP of events at Queer Concordia, and then became VP of communications for the Concordia Student Union my final year.

Outside Queer Concordia, I sometimes felt like I was the one gay person in the room, and felt like I had to hold the torch for what it meant to be queer. Overall, Concordia was a very positive experience. I felt there was an atmosphere of inclusiveness no matter where you were from. It was an exciting campus!”