The fine arts graduate paved the way for other students at Concordia
|
By Ursula Leonowicz
Source: Advancement and Alumni Relations

Gypsy songs at Christ Church Cathedral in Montreal. “The Confession Stone” at Saint Patrick’s Basilica. The Canadian national anthem for the Montreal Alouettes. The Echoes of Erin North American tour. And — for the past eight years — at Concordia convocations.

With these and other performances, Colleen Bartley, BFA 08, GrDip 11, has achieved her dream of becoming a professional classical singer. “I have been fortunate enough to be able to work in my field since the age of 19,” says Bartley. 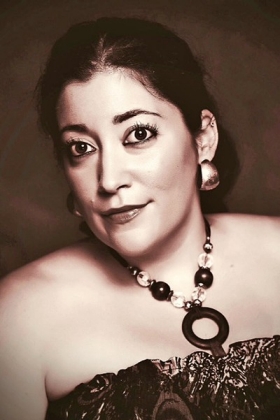 Even for someone with exceptional vocal skills, the road to success in the performance arts is never easy — and Bartley has faced extra hurdles as a person with a physical disability. “Being in a wheelchair has had many challenges, one of which has been finding work as a musician,” she says.

Bartley performs as a soloist, often with pianist Lauretta Altman, and in ensemble productions. She has also been a voice teacher at the Sheila Parkins Academy of Dance and Music since November 2016.

She always knew she wanted to be a singer. “I began singing at age five, when I was given a solo at my school’s spring concert; I sang Schubert’s ‘Ave Maria’ and have loved classical music ever since,” Bartley says.

“Throughout high school I sang in the choir as well as in several musical productions. I also played first clarinet in the senior wind ensemble.”

Bartley became interested in her Irish heritage and discovered her love of traditional Celtic music. “I competed and was a first- and second- place winner in the voice category of the Ottawa and Montreal Ville Marie Feis [traditional Gaelic arts and culture festival], where I sang in Irish Gaelic,” she says.

Bartley adds that her aunt, a professional singer, had a big influence on her decision to pursue a career as a classical singer.

Before starting her classes at Concordia, Bartley reached out to Leo Bissonnette, BA 74, MA 77, PhD 93, former coordinator for the university’s Access Centre for Students with Disabilities, and Maria-Teresa Zenteno, BA 94, who worked as an advisor at the centre for 25 years. She wanted to see what could be done to make her time at the school more accessible.

“Both of these individuals were instrumental in ramping the music department’s Refectory, allowing me to attend all of my classes, which otherwise would not have been possible,” Bartley reports. “This in turn paved the way for other students with motor impairments to be able to attend their classes in the Refectory of Loyola Campus.” 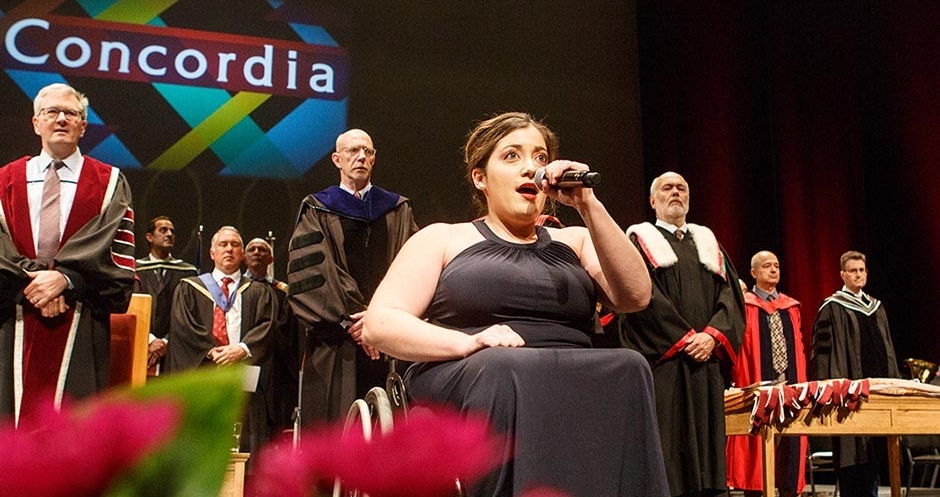 Bartley has performed the national anthem at Concordia’s convocations for the past eight years. | Photo: Concordia University

She credits her professors with teaching her how to read a score accurately and to respect the composer’s work, while still being able to add her own interpretation to the music.

“I had many fine professors at Concordia, but my voice teachers Beverly McGuire and Barbara Lewis and my piano teacher Elizabeth Haughey were my mentors,” says Bartley.

“Along with theory professor Christine Beckett and the late Christopher Jackson, who was my chamber choir director as well as the director of the graduate program at Concordia, they have continuously guided me throughout my career.”

Bartley landed her first professional singing job as a church cantor while still studying at Concordia. Today, she considers it a real privilege to sing the national anthem at the university’s convocations.

“When I sing the national anthem, I feel a great sense of pride to have the opportunity to live in Canada, one of the greatest countries in the world,” she says.

“Being a graduate of Concordia, I feel it is a great honour to be invited to sing the national anthem for the university.”