The largest UN mission you never heard of

On September 17, 2017, I boarded a plane at Pierre Elliott Trudeau International Airport in Montreal bound for the Democratic Republic of Congo. In what seemed like an instant, I went from my comfortable office to a six-month operational tour, seconded to the United Nations by the Canadian Forces. My purpose was to support the largest current peacekeeping mission, Mission de l’Organisation des Nations unies pour la stabilisation en République démocratique du Congo, better known by its acronym, MONUSCO. 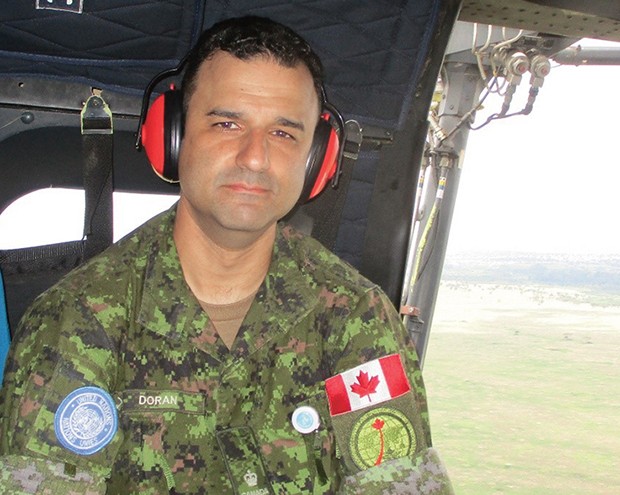 Major Daniel A. Doran is pictured en route to Rwanda and Sake in the Democratic Republic of Congo.

This was my third operational deployment as a Royal Canadian Engineer officer. Yet it was my first in the seven years since I left the Regular Force for a quieter civilian life in Montreal. My stay at home was broken up occasionally with part-time military service as a Reserve officer with the 34th Combat Engineer Regiment.

I joined the Canadian Forces in 1998. My wife, Lindsay, and I decided it was time for me to leave the Regular Force in 2010. Yet I still had the desire to go overseas with the Canadian Forces at least once more. My dream took a back seat over the next few years with the blessing of two children, a new job with McGill University’s Facilities Management and Ancillary Services, part-time service with the Army Reserves and starting my MBA at Concordia’s John Molson School of Business (JMSB).

I can best describe those years as beautifully chaotic. There was a constant flurry of taking children to sports, studying, working and trying to keep up with an equally ambitious wife also pursuing a graduate degree.

Last year the moment finally came. Our schooling was complete, we were both comfortable with our jobs and the children were no longer rambunctious toddlers. After some discussion with both Lindsay and my employer — in that order — we agreed I would serve for six months with the Canadian Forces while retaining my job — and marriage.

My role in the mission evolved after my arrival. I began as an operational planner in the Divisional Headquarters and then transitioned to a special projects role. That required a broad skillset and a capacity to research, synthesize and resolve problems spanning organizational structure, operational process and strategic planning. The high-quality training and education I received during my MBA studies at JMSB prepared me well for these professional opportunities.

The mission was nothing short of fascinating. The Democratic Republic of Congo is both terrifying and inspiring in its complexity. It sustained two major wars between 1996 and 2003, which collectively took the lives of more than 5 million people. These mass casualties have been followed by continued sporadic violence to this day. This has not generally been covered by Western media, except when 14 Tanzanian peacekeepers were tragically killed on December 8, 2017.

The challenge for the approximately 16,500 UN peacekeepers is to untangle decades-long ethnic, international and regional conflicts. Peacekeepers face daily crises, with weak central institutions and significant corruption. While these challenges are tempered by a people whose endurance remains indefatigable and desire for social justice insatiable — these qualities remain the Congolese equivalent to the Dutch boy with his finger in the dam. Except in this version, there are more holes than the boy has fingers.

The conflict’s root causes are common to most others: poverty, disease, hunger, corruption, greed and disenfranchisement. While the UN mission has made progress alleviating some of the pain, there is a long way to go and many obstacles to overcome. The challenges faced by the Democratic Republic of Congo are not unique within the African continent, yet their people deserve better. They need the global community’s support to achieve the same peace and security so many enjoy every day.