Riding the cloud in the high-tech world

Cloud computing and information security seem to be in the news constantly these days. One Concordia graduate is helping shape the narrative.

Saurabh Oberoi, MASc 14, is a senior technical consultant for Groundswell Cloud Solutions, a Vancouver-based company that provides tailored cloud computing solutions to clients. Oberoi was promoted to his position at Groundswell after only a year and a half there, a considerable achievement. 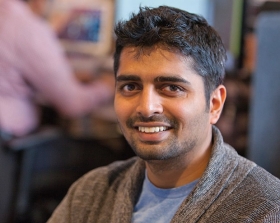 Oberoi attributes his success to hard work and his studies at Concordia. His master’s thesis dealt with information security on smartphones, and his job requires him to keep his clients’ data safe.

“We do a lot of customization. Whatever we are building, we need to make sure that it is 100 per cent secure because it’s on the web, it’s in the cloud, it’s just sitting out there,” Oberoi says. “So we do a lot of vulnerability testing on the code.”

At Concordia, he initially had difficulty finding a supervisor. Yet Oberoi remained determined to write a master’s thesis rather than earn his degree through coursework alone, which was an option for him. He was therefore grateful when Amr Youssef, professor and associate director of Concordia’s Institute for Information Systems Engineering, accepted him as a student after completing his first semester courses.

Youssef soon became a mentor to Oberoi. “I could just go to him and ask any random question,” Oberoi says. “It didn’t matter if it was related to my thesis or not, or if it was just personal.”

Although Oberoi had applied to co-op positions through Concordia, he decided to focus on his thesis work with Youssef. Directed academic research is often thought to be less favoured by employers than the on-the-job experience offered by co-op programs. Yet for Oberoi, it worked out just fine.

This is partly because of the knowledge he gained from his research and partly due to the career advice he received at Concordia. Some guidance came from the university’s Career and Planning Services (CAPS). Its online resources made applying for a job particularly easy.

“Looking through the portal, searching for things that I was particularly interested in, made the process much easier,” Oberoi says.

He also attended several workshops on communication skills that could be used every day on the job and, particularly, at job interviews. Topics included “what to say and what not to say” and “how to take care of things when there is an awkward silence.”

Oberoi says that taking those workshops “gave me a very good level of confidence.”

Oberoi also speaks highly of the career advisors at CAPS. He now passes along to current students the same advice he received. “Modify your resumé based on the field you are applying to,” Oberoi says.

Even within a relatively specific field, there are specialties. Computer science, for example, has security, coding and cloud computing. “Understanding that helped me a lot.”

Accepting a job in Vancouver was initially a challenge. Oberoi felt settled in Montreal after living there for two and a half years, having come to Concordia directly after his undergraduate degree from the S.S.P.M. College of Engineering in Kankavali in his native India.

“I didn’t know anyone in Vancouver,” Oberoi recalls. “I had to start from scratch, and that was one challenge for me — but I overcame it.”

Now, Oberoi is happy at Groundswell. “I have a great career growth path,” he says.

“It is rewarding work, too. Each client has unique needs” — so Oberoi is always doing something different. “We explore different types of cloud computing solutions every day.”