Advocating for a sustainable future

“The environment can’t speak for itself; you must advocate on its behalf.”
|
By Toula Drimonis
Source: Concordia University Magazine

When Bradford Dean, BA (human env.) 11, GrDip (env. assessment) 16, earned his undergraduate degree from Concordia, he found that he had enjoyed his time so much that he immediately decided to stay on and pursue a graduate diploma in environmental assessment.

“My experience was such a positive one. So many of our courses were so hands-on and beneficial to what we were studying,” says Dean, coordinator for the Sierra Club’s Quebec chapter. The club actively works with grassroots and other like-minded organizations to advocate for the environment. 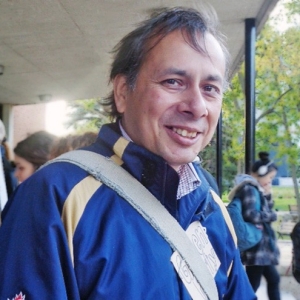 The sharp contrast between environmental objectives and actual policies was what pushed Bradford Dean — seen here at a meet-the-candidate’ BBQ — to enter politics and run for the green party of Canada for the Lac-Saint-Louis, Que., riding in 2015.

“I think one of the things I remember the most — it was quite unique to the Concordia experience — was working as a lab monitor at the Aboriginal Centre, where I had the opportunity to meet with Indigenous people from all over the country and the U.S. We often live in isolation in our own communities and this allowed me to make friends and gain a better understanding of where I come from.”

Indeed, Dean comes from Northern Manitoba. As a member of the Cree First Nations, he was certainly concerned about the adverse impact of exploitation on First Nations’ territories in Canada. Yet it wasn’t until he started really studying and seeing the sharp contrast between environmental policies and priorities and those of extraction industries that he was able to see why he was interested in the field.

“My studies at Concordia in human environment and environmental assessment, as well as my minor in urban studies, allowed me to really see the visible proof — in the form of ‘before’ and ‘after’ satellite data and images — that clearly showed how an area could be altered because of extraction industries,” he says.

The politics of protecting the environment

Ultimately, the sharp contrast between environmental objectives and actual policies was what pushed Dean to enter politics and run for the Green Party of Canada in the Lac-Saint-Louis, Que., riding in 2015. “If you’re concerned about environmental damage, you will, at some point, have to become vocal and get actively involved in politics,” Dean says. “The environment can’t speak for itself; you must advocate on its behalf.”

Since First Nations’ rights are very connected to environmental issues, the Green Party platform spoke to Dean and reflected his values. “It was a very positive experience for me and something I would certainly consider doing again,” he says. “It brought me much closer to First Nations’ issues.”

Dean has been with the Sierra Club’s Quebec chapter since March 2017. “Once again, I find myself in the position to be able to work with local organizations on the preservation of green spaces and marshlands on the island of Montreal,” he says. “The Sierra Club supports people who have been affected by environmental change and industrial development, and also supports First Nations’ concerns, such as opposition to the pipeline development, which will run through First Nations’ territory.”

The Sierra Club is also against fossil fuels and advocates for more sustainable sources of energy, an area in which, Dean contends, Canada lags behind. “I wake up in the morning and I have some anxiety about it all,” he says. “Yet it is gratifying that I’m able to do something about it, and it’s gratifying to work with people and organizations that are on the same page as I am. Sustainable Concordia and the engineers at the Concordia Institute of Aerospace Design and Innovation are doing some really incredible work exploring alternative energy sources.”

Dean also recently met with supporters of the Leap Manifesto, a document that outlines a vision for a justicebased transition away from fossil fuels in Canada. “Whether within or outside of Concordia, it’s about collaboration and the sharing of knowledge and resources to better advocate for the environment, and I’m all for that,” he says.