When Stephane Manos, BEng 04, and Ouissam Youssef, BEng 04, graduated from Concordia’s Faculty of Engineering and Computer Science, they knew they wanted to go into business together. The pair had been friends since their CEGEP days at Vanier College in Montreal, and knew from past experience that working as a team was both fun and profitable.

A decade and a half later, they are giving back to the university with a gift they hope will help other aspiring entrepreneurs achieve their goals. 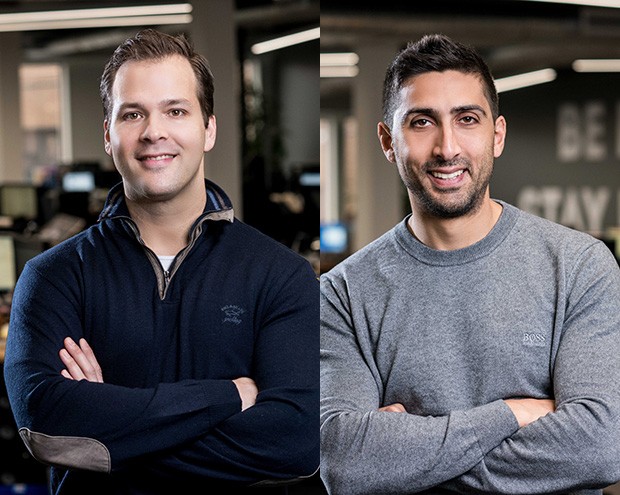 Stephane Manos and Ouissam Youssef co-founded Valsoft in 2011. The company focuses on acquiring and improving the marketing of existing software companies.

The Concordia University ENCS Entrepreneurship Award for Capstone Design in District 3, worth $10,000, will go to a team of students completing their Capstone Design Project. Capstone is a two-semester project for final-year engineering and computer science students.

The award is meant to be used as seed money for the students to actualize their Capstone project in the marketplace, working through Concordia’s District 3 Center for Innovation and Entrepreneurship. District 3 (D3) is the university’s multidisciplinary, innovation and entrepreneurial-oriented think tank.

“These guys spent over 100 hours on their Capstone and they may think there’s a commercial application for this — why don’t we encourage them a little bit?” Manos explains.

Manos and Youssef both had the entrepreneurial bug since they were teenagers. And so, upon graduating, rather than take the more traditional approach of seeking a position at a large firm, the pair looked at the online content management systems and web programming business they’d set up when studying at Concordia and expanded it. Within a few years it became a bona fide success, eventually employing around 300 people at an office in Montreal’s Saint-Laurent Borough.

By 2011, Manos, Youssef and their two partners — including Youssef’s brother — had sold the company, took some time off and started a new venture, which includes Valsoft Corp, a division of the Montreal-based Valsef Group.

It has since acquired three more companies — two of which were formalized just this May.

The first winners of the ENCS Entrepreneurship Award are a group of students who are hoping to enter the electric skateboard market. While that market is already well served in terms of choice, team member Josh Zimet says their skateboard has a specialized gear differential system that gives it additional turning capabilities and power, and is twinned to an app that allows users to customize their ride and track their distances travelled.

Zimet says the prize money will help alleviate some of the expenses incurred as they go through the process of turning their project into something lucrative. Fortunately, their experience at District 3 will help prepare them for at least some of what’s in store.

“D3 involves lengthy time commitments,” he says. “You’re building something from the ground up.”

The D3 project is more than just an academic exercise. It involves weeks of frequent interaction with customers and using their feedback to modify and improve the products. That kind of intensity, says Zimet, not only acts as a crucible for creativity and business sense — it also forges lasting friendships.

Having completed their own Capstone projects, Manos and Youssef are well aware of the demands placed upon Zimet and his colleagues. The award, Manos says, will help the recipients focus on their idea full-time — a must, he adds, for achieving real business success.

Manos freely says his own career hasn’t used much engineering in the strict sense of what he learned at Concordia, yet he feels the habits he picked up while studying there were invaluable.

“Engineering is great, and I love the way it teaches you how to approach a problem, with a solution in the back of your mind — how are we going to reach a solution?” he says. “But Ouissam and I were always passionate about business.”