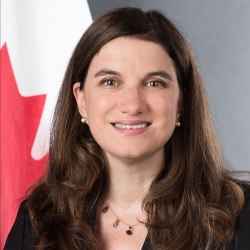 Nathalie Dubé, Canada’s new ambassador to Morocco, has been with the Canadian Foreign Service for 20 years. | Photo credit: Balfour Photo

“When you first join the Foreign Service it seems to be a very impossible dream to reach — that eventually you’ll be an ambassador somewhere,” says Dubé.

As the highest-ranking diplomat representing Canada in Morocco, Dubé manages the embassy staff and oversees all of its active programs, everything from managing security threats to negotiating trade partnerships and implementing cooperation projects.

It’s a big job, one which Dubé describes as a “wonderful challenge.” The beauty of the position, she adds, is its variety.

Her love of travel has taken the 20-year Canadian Foreign Service veteran all over the globe, where she has worn many different hats. Often, her work put her at the front lines of Canada’s emerging and evolving relationships with other countries.

Dubé received her first posting in 1995. For the next two years she was a trade commissioner in Canada’s newly established embassy in Hanoi, Vietnam.

At the time, a 20-year-long United States trade embargo had just been lifted, and the Southeast Asian country was opening up to the Western world. “It was fascinating to be there as the country was changing day to day,” she says.

After returning to work in Ottawa for four years, Dubé moved to Rome to head up the political and public affairs section at the Canadian Embassy.

At that particularly busy and challenging point in her career, she was primarily responsible for overseeing security issues and managing the positive political relationship with the fellow G7 nation.

Dubé later headed up the trade and investments section at the Canadian embassy in Paris, from 2009 to 2013.

Between each international posting, Dubé came home to Canada and worked at headquarters in Ottawa. For the year leading up to her recent appointment, from 2013 to 2015, she was director of Invest in Canada at the Canadian Trade Commissioner Service.

“I was asked this summer if I wanted to be considered for the ambassador position,” she says. “Of course, I jumped on the amazing opportunity.”

Born in Paris, Dubé and her parents moved to Sherbrooke, Que., when she was a baby. A few years later they moved to St. Leonard, Que., where she subsequently attended high school and CEGEP.

It was during this period of her life that she got her first taste of living overseas. Between terms, Dubé spent the summer working as an au pair in a small village in Switzerland.

The experience was eye opening, she says. “I wanted to make sure that whatever career I chose had an international aspect to it, where I could not only travel but hopefully live in a different country and experience the culture firsthand,” Dubé says.

Carol McQueen, BA 95, fulfilled a lifelong ambition when she was appointed ambassador to the Republic of Tunisia in late 2015. “It’s an incredible honour and privilege to get to represent Canada and all of Canada’s values and interests as an ambassador abroad,” McQueen says. 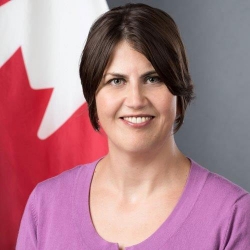 Canada’s new ambassador to Tunisia Carol McQueen won a Rhodes Scholarship at Concordia in 1995 and was named a Great Concordian in 2015. | Photo credit: Balfour Photo

She has spent most of her career living and working in Africa — far from her native Montreal neighbourhood of Notre-Dame-de-Grâce.

“I’ve always been curious about the world,” McQueen says. An avid reader of newspapers and magazines such as The Economist, her fascination with international affairs blossomed during a Canada World Youth Exchange in Pakistan in her late teens.

After becoming passionate about the issue of the prevention of genocide while studying at Concordia — and earning a prestigious Rhodes Scholarship in 1995 — she travelled to England and eventually pursued a PhD at Oxford University. There, she researched and subsequently wrote a book about the use of safety zones to protect civilians against genocide and ethnic cleansing during arms conflict.

For the next several years, McQueen worked for the UN Peacekeeping Mission — first in the Democratic Republic of Congo and then in Rwanda. It was there that she met her globetrotting husband, Christian Kananura, himself the son of a diplomat. They now have two young daughters.

McQueen’s job presents certain challenges, particularly with respect to spousal employment. Yet she believes that by adapting to cultural differences and embracing constant change, her family has had the distinct opportunity to connect with people across the globe.

“What never ceases to amaze me is how much we actually have in common with people around the world — regardless of language, class and colour of skin,” she says.

“I’ve always made such amazing friends because on that very human level people share very similar aspirations of finding love, ensuring their kids can have a good education and enjoying life with friends.”

McQueen believes that Tunisia is a remarkable place because it is the only Arab Spring country still on a path to democracy, despite facing a significant regional terrorist threat.

Tunisians’ ideals, she points out, are similar to Canadians’.

Reflecting on her own values, McQueen asserts that her five older siblings played a crucial role in helping her develop a strong work ethic.

“I really think that hard work is what leads to excellence and innovation,” she says. “It’s the difference between being mediocre and being exceptional.”

Perhaps even more inspiring is her ability to see the positive in any situation. With the recent passing of her father Hugh McQueen, BSc 54 — a Concordia professor emeritus in metallurgical engineering — McQueen holds her head high with a bubbling optimism.

“I don’t give up and I work hard,” she says. “Even if something bad happens, I tend to wake up the next morning thinking about what I can do today to make it better.”