A spark in pride movement

Alumna photographer to be recognized for vital role in Sexgarage incident
|
By Guenevere Neufeld
Source: Advancement and Alumni Relations

Twenty-five years ago, Montreal police violently stormed a downtown loft space where Sexgarage, a party that catered to gay, lesbian and transsexual people, was taking place.

Were it not for the quick-thinking actions of Linda Dawn Hammond, BFA (photography) 90, who had been invited to photograph the event, crucial evidence from that night would not have made it to the media or the greater public. 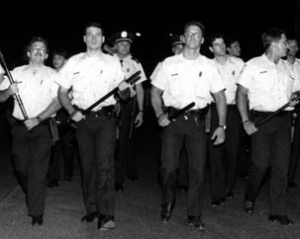 Police line-up in preparation for the attack on the partygoers of Sexgarage | Both photos: Linda Dawn Hammond / IndyFoto.com 1990 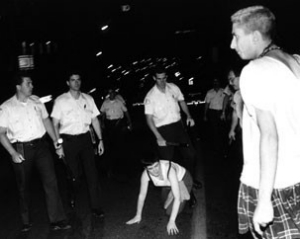 Police repeatedly harass partygoers on the street outside the party

This year, Pride Montreal is recognizing the role Hammond played by making her a guest of honour in its parade. In addition, many of the never-before-seen photos she took during the Sexgarage raid will be featured in an open-air exhibition from August 12 to 16 at Place Émilie-Gamelin.

Under the guise of an alleged noise complaint, over 30 Montreal police officers from various stations throughout the city converged at the loft party at De la Gauchetière Street and Beaver Hall Hill to shut it down.

With the batteries in her flash dying, Hammond took picture after picture of the police — who had removed their identification badges in the midst of the confrontation — attacking the revellers.

Eventually Hammond herself became a victim to the violence. With her legs knocked out from behind, she threw her camera toward her friends in hopes the negatives would be saved. 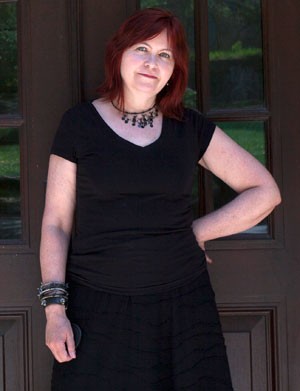 Linda Dawn Hammond in front of all that remains of the warehouses near the site of Sexgarage. | Photo credit: Richard Burnett 2015

“It was chaos,” she says. “People were screaming, people were running. It was dark. To throw that Nikon was a difficult thing. I had to brace myself and say to myself, ‘This is no longer a camera; this is a box with something important in it.’”

A few photos were published the next morning in La Presse and the Montreal Gazette —  with the rest locked in a security deposit box to protect the identities of partygoers.

In the following days, the gay, lesbian, bisexual, transgender and queer (LGBTQ) community hosted sit-ins to protest the brutality of the police’s raid. Dozens were arrested, including Hammond — and the LGBTQ community began to organize.

The situation eventually turned violent with media and onlookers witness to the forceful arrests of 48 participants. Criminal charges were eventually dropped.

Hammond downplays her role in the events, sticking to the facts — and to her convictions — and calling herself “a photographer with very close ties to Montreal’s gay community, who saw this as a human rights violation and decided to do something about it.”

She is currently writing a short book about her experience, which she hopes to publish in time for Montreal’s pride festivities. “There’s a lot to that story that has never been divulged,” Hammond says.

These days in Montreal it may be hard to imagine a police attack on a person simply because he or she is part of the LGBTQ community, but 25 years ago things were different.

Boudreault stresses the need to support the transsexual movement, whose members “still have a lot of fights to be fought to reach where we are for the lesbians and gays of Canada,” he says.

The Sexgarage incident has been heralded as an important milestone in the development of LGBTQ activism in the city. Pride Montreal credits it as the catalyst for the creation of the Table de concertation des gaies et lesbiennes du grand Montréal, the establishment of a number of annual events: the march and outdoor concerts in 1990, the Black & Blue fundraiser in 1991 and Divers/Cité in 1993.

“It was only 25 years ago police were raiding bars and arresting gays just for being gay,” says Boudreault. “Anybody who was there and had the guts to do what Linda did is a hero. It’s really important to thank her and give her a spot where she can show the world what she did.”