Faculty of Engineering and Computer Science graduate off to Sweden this fall
|
By Salim Valji
Source: Advancement and Alumni Relations

Alumnus Mouhamed Abdulla, PhD 12, MEng 06, BEng 03, was recently awarded a prestigious Marie Curie Fellowship. Presented by the European Commission, the fellowship is one of Europe’s most competitive awards, aimed at fostering interdisciplinary research and international collaborations. 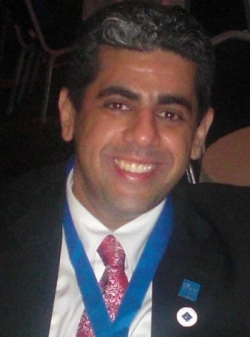 Abdulla is excited about the world that awaits him in September on the other side of the globe — thanks to the two-year, fully funded research grant at Sweden’s Chalmers University of Technology.

“I am eagerly looking forward to this new experience and working collaboratively with outstanding European researchers,” he says. “And of course, Sweden is the country of the Nobel Prize, so physically being where scientific excellence is so strongly admired is in itself magical!”

Abdulla credits his alma mater with much of his success. “All my technical skills, teaching skills, administrative skills and even people skills are largely due to my experience at Concordia. I will be forever indebted to this outstanding institution.”

A three-time Concordia graduate, Abdulla had originally set his sights on McGill University, where he was accepted into the three chemistry-related programs he applied for. Yet at the urging of his brother, Abdulla switched disciplines — and made Concordia his first choice.

“My brother was studying electronics engineering, so he strongly encouraged me to widen my horizon by considering a computer-related specialization — a booming discipline at the time. He convinced me that getting involved early on would be the smart thing to do,” says Abdulla.

So Abdulla enrolled directly at Concordia, embarking on what would become a 15-year journey as a student, professor and research associate, specializing in aerospace systems electronics.

A manual he developed during his graduate studies in 2006, Avionics Made Simple, has been adapted for courses at Concordia and other institutions. Eight years after it was published, it’s still downloaded over 300 times weekly.

His doctoral studies were concentrated in wireless communications. “My research and dissertation work attempted to mathematically characterize and mimic a cellular network using the notion of planar-based stochastic geometry — a topic overlooked by the research community,” he explained.