Bram Freedman wears many hats at Concordia. In July 2013, his portfolio expanded to the Advancement and Alumni Relations sector and he now serves as vice-president of Development and External Relations, and Secretary-General. 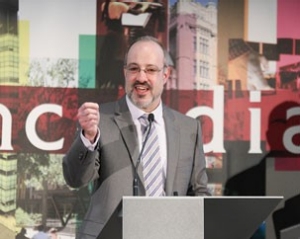 Bram Freedman is the university’s top representative to alumni and donors.

Pivoting between his responsibilities with ease, Freedman also oversees external relations and university governance, legal affairs, institutional records management and archives, translation services and the Office of Rights and Responsibilities, as well as the Ombuds Office.

Up at 6 a.m. to hit the treadmill, Freedman is a family man who is out and about, as he says, nurturing strategic relationships with donors, potential donors and alumni.

Aside from a brief hiatus at the Federation Combined Jewish Appeal between 2003 and 2008, the McGill University law school graduate has been at Concordia for nearly 20 years.

After law school, what brought you to work in university administration?

Bram Freedman: “My father was dean of medicine and then provost at McGill, so I like to joke that I went into the family business. Public service and making a contribution to society is something that I was raised with, so it seemed a natural fit.”

How has the university changed since you first started in 1992?

BF: “There have been many changes since then, but the biggest difference is simply our sheer size and magnitude. We’ve grown exponentially in 20 years. With a community of 46,000 students plus 7,000 faculty and staff, we’re the size of a midsized Canadian city.”

After nearly two decades at Concordia, what do you love most about the university? What makes it special?

BF: “Without a doubt, I love Concordia’s diversity and dynamism. This is a fascinating and complex place. I like action and I am a firm believer that the biggest curse is being bored. That’s never a problem here! What makes it special is our unique DNA — the combination of the Jesuit liberal arts tradition from Loyola College and the YMCA tradition behind Sir George Williams University, which started as a night school for working people.”

In 2013, your responsibilities grew to include overseeing Concordia’s Advancement and Alumni Relations (AAR). Please describe your role.

BF: “I’m Concordia’s top representative to alumni, managing the planning and execution of all fundraising activities and campaigns and alumni stewardship, as well as the cultivation of donors. I oversee a great AAR team ranging from fundraisers to alumni relations officers and all the “back office” people in between who actually make the place run! I also serve as president of the Concordia University Foundation, which manages funds donated to the university. It’s a big ship. As well as overseeing AAR, I have a number of other responsibilities as secretary-general. The only way I can manage it all is because of my great team of directors who support me and do a great job every day.”

What has impressed you most in your dealings with alumni and donors?

BF: “They’re so accomplished in their respective fields. Whether they’re working on Wall Street, on Bay Street, in the oil industry, at The New York Times or in the arts, they’re doing fascinating things. It’s extremely gratifying. I’m also impressed by their affection and affinity for Concordia. Many of them found their life partner at Concordia, or they found their calling or a mentor who changed their lives.”

What have been Concordia’s greatest challenges?

BF: “The biggest challenge has been the Quebec funding model for universities and the difficult financial situation that the current Quebec government finds itself in, leading to reductions in government support. I believe we get — and will probably continue to get — enough money from the province to be a good university, but we want to be a great university. That means we have to look at alternative sources of funding, such as philanthropy and private giving. We’re focusing our efforts more and more in that direction. At AAR, we’re in the people business. With 193,000 alumni, it takes people to make personal contacts with alumni and donors, and finding enough time to make those contacts is always a challenge but one that we relish.”

Is there a secondary challenge?

BF: “Yes. We strive to maintain a sense of community and culture when we’re large. We’ve been successful by insisting on smaller class sizes whenever possible. Plus, we have the college model, meaning the Liberal Arts College, the Simone de Beauvoir Institute, the Loyola College of Diversity and Sustainability, for example. The colleges allow students to identify with and become part of a smaller group.”

How do you see the university changing over the next decade? What will be the challenges?

BF: “With the funding model that exists, we have to ask ourselves, will we be able to do everything that we’re doing now in the next 10 years? I’m not sure. We’ll have to do things differently Concordia is well positioned to take advantage of these coming changes because, as universities go, we’re actually remarkably unbureaucratic and we leave room for individual innovation. Plus we have a reputation for being well managed, with one of the smallest deficits of any Quebec university. That means we can adapt more easily than more entrenched, slowmoving bureaucracies.”

What opportunities are on the horizon?

Can you describe your fundraising expectations of the next few years?

BF: “We’re currently planning our next comprehensive campaign. To do that, we create a table of needs and priorities, working closely with the deans, provost and vice-president of research as well as the president. I’m pleased to say that our fundraising numbers are up significantly in the last couple of years. I credit President Alan Shepard with a lot of that. He has really invigorated Concordia. I think Concordia is more and more on people’s minds and they’re more and more comfortable supporting Concordia financially.”

What are your current fundraising priorities?

BF: “While they’re still under development, it’s safe to say our priorities will include greatly enhancing student financial support at both the undergraduate and graduate level (both merit-based and needs-based), as well as support for innovative programs such as our District 3 Centre for Innovation and Entrepreneurship and our PERFORM Centre.”

How are you and your team working to reach these fundraising goals?

BF: “For the last year and a half since I came on duty at AAR, we’ve been building a really top-notch team. We’ve also ramped up our visits to donors and alumni, doing whatever we can to get the Concordia story out there.”

You work closely with Concordia President Alan Shepard. What’s that like?

BF: “My colleagues at other institutions are envious because I’m fortunate to have a president who is unbelievably enthusiastic about fundraising. He’s tireless, taking trips to meet alumni, attending functions and hosting events at his home as often as twice a week. We’re constantly in touch over the phone, by email or by texting and have an excellent relationship. That’s critical in this job.”

What are Concordia’s strongest selling points?

BF: “The way we balance our tradition of accessibility with our commitment to excellence. We’ve undersold our excellence in the past. That’s changing. Our John Molson School of Business is second to none. Our Faculty of Fine Arts is world renowned. In the faculties of Arts and Science and Engineering and Computer Science, we have excellent programs and produce agile thinkers. It’s time to stand up and say that unabashedly.”