Each year, Concordia’s Department of English hands out prizes for excellence in the studies of English literature and creative writing. The Irving Layton Awards for Creative Writing, worth $500 each, are given to undergraduate students for works of poetry and fiction. 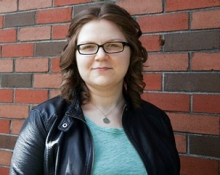 To qualify for the poetry award, students must submit a portfolio of one or several poems.

The Montreal native says her award-winning poem, barging in, was inspired by the Canadian literature she read in her program.

baits my interest. Lithest, no schooner

clips along beside her, each schooner

daft as a flat ale, or some Moses schooner

half a chance redeem, I chide. Hitting Big Schooner

Island out near Halifax. Or Schooner

marking off the long territories. Schooner

parliament won’t let anyone new aboard the schooner:

rather than later. I look again, blue schooner

slipping down the dime, jingling schooner

to jingling schooner, & think of old Mac, one schooner

under flag and crown. Bowing out, schooner

veers portside at the thought. Then bright red schooner,