How yoga changed my life

Through yoga, I paid my way through university.
|
By Yasmin Fudakowska-Gow
Source: Concordia University Magazine

I often say that I didn’t choose to become a yoga teacher, but rather yoga chose me. 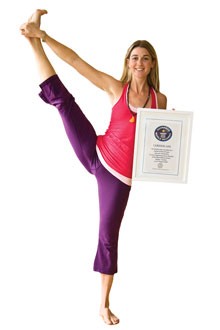 Yasmin Fudakowska-Gow holds a Guinness World Record for the longest yoga marathon by a female.

It was 1995. I was an athletic 14-year-old — injured from soccer — when I connected with a woman who had just opened a yoga studio near to where I lived. She suggested I try yoga. Since my mother had already introduced me to meditation, I was open to it.

I wouldn’t say I loved yoga as a teenager. It was challenging and I felt clumsy. I couldn’t touch my toes. But I came to love and respect the woman who owned the studio. She became my mentor and encouraged me to continue yoga. I remember that as my yoga improved, I began to feel graceful, strong and confident.

Fast-forward six years to the summer before my first semester of journalism and communication studies at Concordia: I became an apprentice to a yoga teacher in British Columbia. I had no intentions of teaching yoga, but I wanted to learn more. Eventually, I started teaching yoga to children and later to adults. Through yoga, I paid my way through university.

While my classmates worked long hours at retail stores or waited tables, I taught about six yoga classes a week. I was paid well enough from these classes to cover my tuition fees, books and a year of study abroad, and to graduate without debt.

Teaching yoga was — and still is — greatly rewarding and enjoyable for me, but back then I had no plans to make it a career. I always saw yoga as a part-time job. Many of my family members were esteemed journalists and film producers. Some even taught at Concordia. I was hyper focused on following in their footsteps. But something changed.

In 2003, the year I did an exchange at RMIT University in Melbourne, Australia, North America went yoga crazy. When I returned to Montreal, yoga was in high demand and there weren’t many yoga teachers. So while completing my final semester at Concordia, I rented space at a studio in Pointe-Claire, Que., a Montreal suburb, and ran yoga classes three nights a week. The classes were packed and often with waiting lists. By graduation, my yoga business was booming. Plus, I loved being active and sharing the benefits of yoga with others. In short, I was happier than ever.

Since then, I have enjoyed a hugely successful yoga career. I bought the yoga studio from my mentor in 2007 and sold it five years later. I have five yoga videos for sale in major retail stores across Canada and on iTunes. I teach all over the world and have trained professional athletes.

In 2010, I set a new Guinness World Record for the longest yoga marathon by a female: 32 hours. This initiative raised nearly $15,000 for charity and made headlines around the world. This lifechanging experience deepened my appreciation and understanding of yoga and its incredible powers to heal and transform.

I am now based in a beautiful 2,200-square-foot loft in Old Montreal that is both my home and studio. It’s a dream manifested. In this fabulous space, I lead workshops, classes and yoga teacher trainings and host a variety of events that blend yoga, food, music and art. I am also an accredited naturopath and Ayurvedic practitioner and have a clinical practice as well.

Yoga is the glue that connects my life. It is my profession, but also my personal discipline, my art and my temple. I am forever grateful to yoga. It has enriched who I am and made me an irrepressible yet balanced entrepreneur and leader.