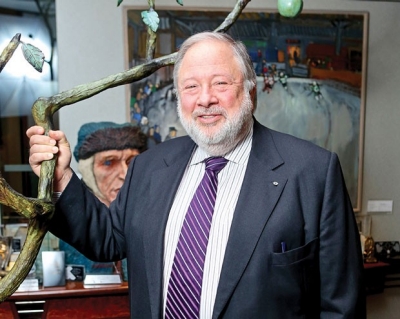 Jonathan Wener at Canderel in Montreal.

Wener became chancellor on January 1, 2015. He spoke to Concordia University Magazine about his long connection to his alma mater.

You became chancellor on January 1. How does it feel?

Jonathan Wener: “I couldn’t be more delighted. I am familiar with the structure of the role in terms of graduation ceremonies and doctoral presentations as a result of my role as deputy chancellor these past few years. I’ve often wondered what it’s actually like for the students to be on stage receiving their degrees — some nervous, some incredibly confident, some with a real swagger as they come forward to be capped.”

Do you have a specific vision of your role?

JW: “I’ve been analyzing what could be meaningful and beneficial for students and faculty. It’s too easy to just show
up for graduation ceremonies. I firmly believe there’s more
a chancellor can do. It’s going to be a bit of an evolution.”

How will you interact with Concordia students?

JW: “My hopes are to help them with their careers, perhaps get some students to embrace Concordia beyond graduation, give them a sense of belonging and the ability to give back. That connection will do them a lot of good in their lives.”

You’re a Sir George Williams graduate. Why did you choose Concordia?

JW: “I liked the Harvard Business Case System here much more than McGill University’s pure academic system. I had an early acceptance at McGill but I was frustrated because I really wanted to go to Concordia. When I finally got my Concordia acceptance notice I said: ‘My God, that’s where I want to go.’”

"I have a great sense of joy — in my education and the quality of it, the absolute joy of learning in the real world."

What kind of student were you?

JW: “I was never home. I was always in the university. If I wasn’t studying I’d be doing case work or an exhaustive array of activities. I remember running a bed race down De Maisonneuve Boulevard for Commerce Week. I ran a ski trip one year to Kitzbühel. I took 20-odd people for three weeks — airfare, accommodations, skiing, the works — for $275.”

How do you feel when you recall those days?

JW: “I have a great sense of joy — in my education and the quality of it, the absolute joy of learning in the real world, and the prominence and practical approach that Sir George implemented relative to the Harvard Business Case approach. We worked management-style in teams, having to count on each other to perform. We also had a great many professors who came from industry and who provided us with real issues and real solutions based on their day-to-day experience.”

Concordia is 40 years old. What do you make of it today?

JW: “The spirit has changed. Concordia has come into its own and matured to be a very thought-provoking and fine institution of learning. We have faculty members who are among the best in Canada. We’ve grown in status and predominance. We now have a campus we can be proud of. President Alan Shepard has done a phenomenal job and has brought extraordinary leadership skills to the table. We’ve got a great future ahead of us.”

Has Concordia shaped you as an individual?

JW: “Concordia is ingrained in my life. We’re inextricably linked. I was very involved as president of the student union and as clubs commissioner. I’d also been one of the first students on the Board of Governors. Second, I met my wife on her first day at Concordia. Third is my business: I got a call in 1975 asking if I’d be interested in buying the Student Union Building on Crescent Street.”

JW: “I’d had enormous success. I wanted to be in my own business by age 30. By 1980 I was. That capital got me there. I had to work hard for it, sure. The Concordia connection was an essential part of that success all the way through. I felt bound to provide a meaningful donation to the university to show my gratitude for all it had done to prepare me for the world at large and for my own family unit.”

Are you satisfied with what you’ve achieved at Concordia?

JW: “The greatest legacy that I could leave was the re-planning of the downtown campus and the construction of the various buildings on Sir George Williams and Loyola campuses that occurred during my chairmanship of the Real Estate Planning Committee. [President Emeritus] Fred Lowy shared a vision with me for what Concordia could be and he gave me the rope to get it done.”

What other successes has Concordia brought you?

JW: “My university years gave me a sense of flourish as an individual. I got a lot of acceptance. As I look back as a mature businessman, the rejections I had as a kid in grade and high school prepared me, because in business you get rejections all the time. How you overcome objections is what’s important. I am actually grateful that I had them because they provided me life lessons and backbone.”

You’re writing a book. What’s it about?

JW: “It’s called No is Maybe on the Road to Yes. It’s about learning to deal with objections and challenges because you’re constantly going to be challenged no matter what you do in life. When I was president of the Jewish General Hospital, I presided over a new strategic plan that required a $200 million fundraising campaign. The highest official amount prior to that was $38 million. Everyone said: ‘You’re dreaming in Technicolor.’ I said let’s think big, not what’s not possible. That’s how I’ve spent my life. The book is about people who’ve told me what I can’t do and my way to get to a yes. We finished the campaign at $201 million seven years in.”

You have a philanthropic streak. How did it emerge?

JW: “It’s something I grew up with as a kid. It’s part of my DNA. Sir Winston Churchill said it best: ‘We make a living by what we get, but we make a life by what we give.’ Writing a cheque is easy. Anyone can do that. Many times people would rather write a cheque than do anything. Writing a cheque and giving time, which they’re not making more of, is different. Time is the most precious gift.”