The things you do for love

Navigating life has not been a paint-by-numbers watercolour
|
By Jeanie Keogh
Source: Concordia University Magazine 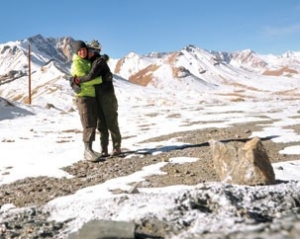 Jeanie Keogh literally went halfway around the world to be with her boyfriend, Attilio Falletta. They’re pictured in the Pamir mountains (at 4,200 metres) in Tajikistan.

When I graduated from Concordia in 2002, I thought a successful life was simple: work hard, impress the right people, don’t back down on your goals. That life has been considerably less linear than my 22-year-old brain could imagine is an understatement. For one, falling in love turned my well-constructed master plan into a choose-your-own adventure book.

I met my jet-lagged boyfriend-to-be, Attilio Falletta, three and a half years ago in a Vancouver restaurant the day he arrived from Belgium. My intention was to act as his tour guide. Instead, I be­came the souvenir he brought back with him to Europe a year later, having quit my dream job as a musician in a gypsy circus band.

After we’d lived together a year in Brussels, Attilio announced that he was ready to take the next big step in his life: a two-year solo bike trip around the world.

Off he went, leaving me to fend for myself in an unfamiliar city. I waited five months to see if he would have a change of heart and come back. While he was away, I worked as an English teacher and a voice-over actress for a French cartoon, and wrote articles and stories for various publications.

When he didn’t return, I flew to Tajikistan to bike with him through the Pamir Mountains, hoping he would come to his senses and cut his trip short. If he didn’t, I had a break-up speech prepared: “You can’t expect me to wait for you. This isn’t WWII and I’m not a war bride.”

I dropped the “it’s over” relationship ender on day four of the trip, at the side of the road after my gears had busted on a 3,000-metre uphill climb in 35-degree Celcius heat.

Attilio smiled and told me I was invited to bike with him for the remaining 1.5 years of his journey. I had been willing to leave my country for his, but becoming a nomad with multiple degrees was not in the master plan. During the next three weeks of biking, I complained about the constant ascent, the heat/cold, the lack of proper nutrition and hygiene, having to bike through sand and snowstorms, and his poor trip planning. Despite this, he continued to believe in us.

You can’t expect me to wait for you. This isn’t WWII and I’m not a war bride.

Our three-year anniversary was spent at the border of Tajikistan and Kyrgyzstan, curled up in our respective sleeping bags in a windowless bunker where off-duty border guards had slept on mattresses stained black with mould. Later that night, as I suffered from alti­tude sickness at 5,000 metres in -25 C temperatures, my boyfriend kissed my barf-scented lips and gave me the last sip of water knowing we were both dehydrated, hypothermic and dozens of kilometres from a water source.

At that moment, it hit me like a 100-kilometre-an-hour headwind: My master plan no longer existed with­out Attilio. The next day, as we left the mountain range that nearly killed us and our relationship, I felt a sense of hard-earned satisfaction for having travelled over 1,000 kilometres with the most important man I could have ever impressed.

Navigating life has not been a paint-by-numbers watercolour. In fact, I would gladly trade mine in for one like those of other people I know — if only for how straightforward they seem.

Attilio is still on the road and I am back in Belgium, planning where we will meet next. The new master plan is to join him at various intervals over the next 16 months as he travels through Asia, South America and then Canada. Meanwhile, I am writing my first book dedicated to Attilio, who inspired me to remember my postgraduate motto: work hard, impress the right people, don’t give up on your dreams.