They desire a better country 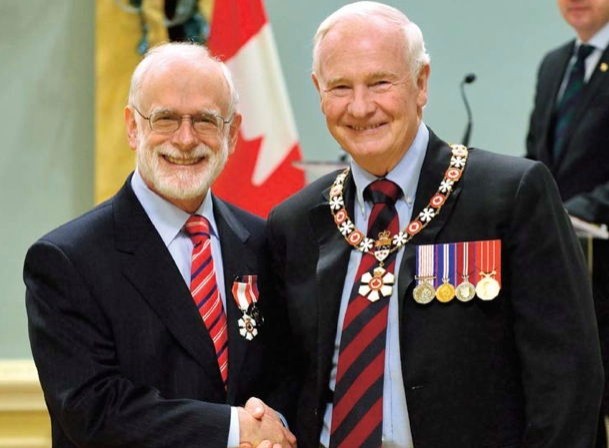 The phone call came on a bright morning last May. “Are you Bernie Lucht?” the caller asked.

She continued, “I’m calling from the Office of the Secretary to the Governor General. The Advisory Committee on the Order of Canada has recommended to the Governor General that you be appointed a Member of the Order of Canada.” My nervous system went into overdrive. The day had begun as normal at the office. Now it had taken a sudden and thrilling turn. I was delighted. I was in shock. I didn’t know what to say.

I hung up and stared at the phone for several long minutes trying to absorb the news. I didn’t know quite what to do next. Then, the thought came: I have to tell someone. I called my wife, Susan.

Several weeks later, a package arrived in the mail. Inside was a letter of congratulations, background information about the Order and a small, padded envelope containing two Order of Canada lapel pins. The letter explained I could start wearing the pin as soon as the announcement of new recipients was made, at the end of June.

The formal investiture ceremony took place just before Christmas. On a chilly Friday morning in mid-December, the recipients gathered with family and friends in the lobby of an Ottawa hotel for the short bus ride to Rideau Hall. Thirty-seven of us would be invested into the Order that morning. We came from all over Canada and represented a rich variety of human activity: sports, business, journalism, architecture, volunteerism, community activism, law, human rights, education, music, the visual arts, scientific research, exploration, medicine, the military.

As people filed onto the bus, I felt a flush come over me as I slowly realized I was surrounded by some of the most accomplished people in Canada. The moment was deeply humbling. Was this real? Did I belong in this group? Perhaps I was on the wrong bus.

After we arrived at Rideau Hall, we were ushered into a room, welcomed and given brief instructions by an aide-de-camp, then arranged in alphabetical order. We walked single-file into a ballroom to the music of a Canadian Forces string quartet and a standing ova­tion from the audience of family and friends. We all stood for the entrance of Governor General David Johnston and his wife, Sharon. Everyone took their seats. The Governor General gave a short speech and the presentations began.

As people are called up one by one, you listen to their citations and marvel at what they have done. Then your name is called. You rise and walk along the aisle towards where the Governor General is seated. You bow slightly to him and turn to face the audience. The Secretary to the Governor General reads your citation. You turn back. The Governor General pins the insignia on your lapel and offers a few private words of congratulations. You shake hands and face the photographers. Click! You leave the platform, sit at a large table to sign a register book and return to your seat. These are moments of magic, moments of intense clarity and elation, moments out of time.

The Latin motto of the Order of Canada is Desiderantes meliorem patrium: “They desire a better country.” The insignia is a lapel pin in the shape of a stylized snowflake with a maple leaf at its centre. I wear it every day. Curiously, it’s had an effect on me that I hadn’t expected: to live up to the promise the Order makes. Help make Canada a better country. Do something for someone. Do something for your community. Be kind. Be generous. Give a gift every day.