Inexpensive coffee, baked goods and fresh sandwiches: it seems like a proven formula. Yet something about what made Tim Hortons number one in Canada gets left behind at the border.

In its home country, as its 2012 annual report claims, “Tim Hortons pours nearly eight out of every 10 cups of coffee sold at quick service restaurants.” Despite making its foray into the United States 30 years ago, the company’s market share there is an anemic 2.4 per cent.

In his book Always Fresh (2006), Tim Hortons co-founder Ron Joyce wrote about how he delayed expanding into Quebec until the mid-1980s because the market was dominated by Dunkin’ Donuts. But within a few years of making the jump, the company became the province’s market leader. Today, Tim Hortons continues to thrive in Quebec, while Dunkin’ Donuts restaurants are a rarity, with just about a dozen left. 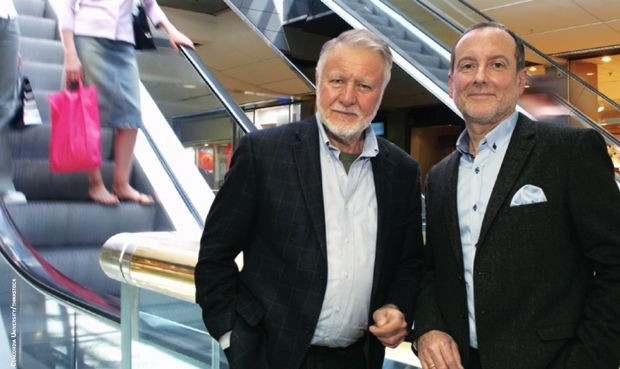 Even with an influx of U.S. competitors, John Molson School of Business Professors Harold Simpkins (left) and Michel Magnan are cautiously optimistic about the future of the Canadian businesses. Credit: Concordia University/thinkstock

Tim Hortons can’t seem to duplicate that success story. Tims has grown about as much as it can in Canada and it knows expanding to the U.S. is key to continued success. Yet for some reason Americans aren’t charmed by the quaint coffee shops, preferring Dunkin’ Donuts, Starbucks and McDonald’s.

Tim Hortons isn’t the only iconic Canadian brand to struggle below the 49th parallel. In the 1980s, Canadian Tire doubled its number of retail outlets when it bought the Texas department store Whites. On the verge of bankruptcy, Whites’s purchase price was heavily discounted. Canadian Tire figured it would adopt the model that made it a success in Canada and offered the same merchandise and store layout under the Whites name. But sales at Whites never took off, and Canadian Tire nearly went under after it lost $300 million in the span of a few years. It eventually sold off the stores.

Professor Harold Simpkins, a senior lecturer in the Department of Marketing at Concordia’s John Molson School of Business (JMSB), maintains that American brands are better at marketing and they’re accustomed to working in a fiercely competitive environment. That puts Canadian brands at a disadvantage when they try to expand due south. “Americans fight really hard,” says Simpkins, who’s also academic director of the Marketing Co-op Program. “They’re more efficient, they have lower taxes, they have a stronger work ethic, they’re used to working with lower profit margins and they’re much more entrepreneurial.”

Perhaps that tougher competition at home explains why many American brands seem to flourish in Canada and dominate the market in a short time. That’s certainly what happened with Walmart after it bought Woolco’s 122 Canadian leases in 1994. Since its launch, Walmart has nearly tripled its number of Canadian locations while Canadian-owned department stores Eaton’s, SAAN and Simpson’s all went bankrupt. 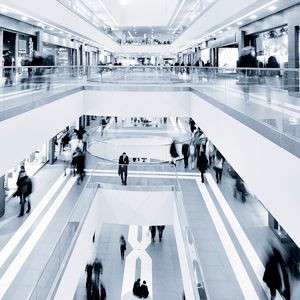 Now another player is poised to reshape the retail landscape. With 124 stores, Target’s foray into Canada is the largest-ever retail launch by an American company. The department store offers a varied merchandise of groceries, electronics, clothing, sports equipment and housewares. Market observers say the Canadian companies most threatened by Target’s launch are Canadian Tire, Loblaws and other grocery stores.

Simpkins contends that one of the reasons American brands seem to do well here is because Canadian shoppers don’t have much loyalty to companies based in Canada. “I don’t know the extent to which we have nationalistic attachments to our brands,” he says. “We really like Canadian Tire. We really like Tim Hortons. We used to really like RIM and Blackberry, but I wonder if it makes any difference to us if they’re owned by Canadians, Swiss, Germans or Japanese.” Simpkins adds that Canadians seem to enjoy shopping at American chains.

Target has come to the same conclusion.

Even before the company opened any stores, its brand recognition among Canadians was at 70 per cent, and Canadians are already used to shopping there when on vacation or when cross-border shopping.

Target’s entry into this country hasn’t been a cakewalk. Nonetheless, its main competitors are refocusing their strategy to combat the Minneapolis-based retail giant. Both Loblaws and Canadian Tire are opening up smaller boutique stores in urban markets where Target isn’t traditionally strong. In July, Loblaws reached a deal to buy Shoppers Drug Mart, which would give the grocery store an even larger footprint in urban areas.

According to the company’s chief financial officer John Mulligan, Target doesn’t expect it will have an easy time in Canada. He told an industry audience last March at CIBC’s annual Retail and Consumer Conference in Toronto: “The grocery retailers are very strong, much stronger than in the U.S. Canadian Tire is an outstanding operator... Walmart is formidable wherever they operate… We recognize that we need to do the things we do well, extremely well.”

Professor Michel Magnan, the Lawrence Bloomberg Endowed Chair in Accountancy at JMSB and a CIRANO (Center for Interuniversity Research and Analysis of Organizations) fellow, says the success of Target doesn’t necessarily mean the disappearance of Canadian brands. “I think the Canadian food retailing scene is a success in the making,” Magnan says, referring to companies like Loblaws, Quebec’s Metro Inc. and Nova Scotia’s Sobeys Inc., which are all in expansion mode.

Simpkins believes Canadian Tire could also be unaffected. “People said Canadian Tire would suffer when Walmart came in; the company thrived,” he says.

Statistics show there’s room for coexistence among competitors. Figures from the International Council of Shopping Centers show there are fewer retail stores in Canada than in the U.S., and Canadians spend more money when out shopping than their American counterparts. The data show sales in Canada per square foot of retail space are $563 compared with $400 in the States.

Simpkins points out that because of the sheer size of American companies, when they can’t find a way to expand into this market they’ll just buy out the competition. That’s what happened with The Bay as well as La Senza, which was purchased by Victoria’s Secret. “I guess when you get to a certain size, you start attracting the bigger players,” he says.

As more American brands migrate north, they’re taking a huge chunk of the retail pie. Toronto-based retail consultant Wendy Evans predicts that by 2015 American brands will make up 70 per cent of the Canadian retail scene, up from 50 per cent just two years ago.

While Canadian shoppers don’t seem to care about the nationality of their favourite brands, perhaps policy makers should take note of the disappearing Canadian head office. Magnan notes that having large head offices located here is an economic catalyst. “The head office is where the decisions are made,” he says. “They’re more likely to retain professional services from around the head office, like attorneys, accountants, consultants and HR experts.”

He adds that having the headquarters of a major retailer nearby could also be a boon for potential suppliers.

As Canadian brands disappear, there are few new companies emerging to take their place. Simpkins says that’s because Canada’s entrepreneurship rate is low, as is the success rate of new businesses. “Part of the reason could be our social programs,” he says. “When you have strong social programs, it kills the entrepreneurial spirit.” He expects that Americans tend to take bigger risks and work harder to make their companies successful because they know the government won’t help them out if they fail.

Canadian entrepreneurs complain their major hurdle is a lack of financing in this country. That’s why many promising technology firms end up relocating to California’s Silicon Valley, where the world’s most successful venture capitalists and technology businesses are located. Banks here don’t generally take bets on risky ventures, so in recent years governments have tried to improve the environment for venture capital firms, which back fledgling businesses in the hopes of a big payout when those firms are either sold or are transformed into public companies.

In September, the Conservative government announced a $50 million investment in four venture capital funds that invest in life sciences and information technology. Quebec, which has one of the lowest rates of new start-ups in the country, has been pouring money into venture capital firms for several years. In 2009, the province set up a $700-million fund called Teralys Capital, with money from the QFL Solidarity Fund (Fonds de solidarité FTQ), Investissement Québec and the Caisse de dépôt et placement du Québec, which manages public retirement funds.

The gamble of both the federal and the provincial governments is that the investments by venture capitalists will result in several big payoffs, which will lead to major profits for the venture capital firms and in turn spur new investment in Canadian companies.

And there are signs the strategy is starting to pay off.

One of the country’s most promis­ing new businesses is Beyond the Rack, headquartered in Montreal. Founded in 2008, the online shopping club started by local entrepreneurs Yona Shtern and Robert Gold has seen tremendous growth, with revenue reaching $200 million annually. The company has been backed by venture capitalists all over the world but got its first break from the Montreal-based investors group Real Ventures, whose nine-person team includes investment analyst Jitender G. (Gabriel) Sundaram, BA 00, venture partner Ian Jeffrey, BA 01, and chief of staff Stephanie Saheb, BComm 11.

Beyond the Rack is now seen as one of the premier shopping clubs, rivalling New York-based Gilt Group.

Jacques Bernier, the head of Teralys, says he’s encouraged by what he has seen in Quebec in the last few years yet cautions there is no quick fix to heal Quebec’s meagre entrepreneurial rate. “It can take 15 to 20 years to change the economy,” Bernier says.

Magnan adds that despite the lack of financing, there are advantages to starting a business in Canada. The country’s major cities are very cosmopolitan and as such provide good testing ground for corporations wishing to hit an international audience. “For a global reach, because of their diversity, you can test drive ideas in Canada’s major cities maybe much more efficiently than in Springfield, Indiana,” he says. “This may contribute to the success of particular chains.”

He adds that Canadians seem to do well in niche products and cites Montreal-based Aldo Inc. as an example. Started in 1972 by Aldo Bensadoun, LLD 12, the shoe retailing company now has 1,600 stores in 80 countries and about 20,000 employees, 1,300 of whom work at its head office and distribution centre in the Montreal suburb of Saint-Laurent. The private company also operates the Globo, Spring and Little Burgundy brands and takes in nearly $2 billion in annual sales.

Magnan says Aldo built slowly, and did so without much external financing.

He points to Lululemon Athletica Inc. as another good example of a Canadian success. The Vancouver-based sportswear company started in 1998 and now has 200 stores in the U.S. and Canada. The company’s revenue was $1.4 billion last year, with a net profit of $270 million.

Although some analysts believe competition from The Gap and other retailers will eat into the company’s bottom line, executives recently announced an ambitious expansion to double its number of stores in the U.S.

The success of Beyond the Rack, Aldo and Lululemon and others provides hope that the Canadian business model isn’t ready to fall apart just yet.

—Jason Magder, BA (jour.) 00, is the tech reporter at the Montreal Gazette.