Millennials — the age group now in their 20s — show tremendous potential for civic commitment. That’s the view of Michael Ryan Wiseman, MA (public policy & public admin.) 13, president of the Conseil jeunesse de Montréal. He feels that never has a generation been as capable of knowing the political world around them.

Michael Ryan Wiseman, president of the Conseil jeunesse de Montréal, worries that young people are being turned off from political engagement due to growing corruption.

Yet young people are more estranged from the political process than ever before. Wiseman watched Montreal’s November 2013 municipal elections with dismay. Turnout hovering around 40 per cent only reinforced the uncomfortable reality that as sophisticated as youth are today, their knowledge rarely translates into engagement with political parties or voting. The Conseil jeunesse — Wiseman’s independent voluntary organization made up of 15 Montrealers between the ages of 12 and 30 — advises the executive council of the city and city hall about youth policies. “This election was a difficult one to get excited about if you were a young person, other than the idea of corruption and governance,” he says. “We’re punching below our weight.”

While Montreal’s 400,000 youth make up about 25 per cent of the population, the dozen elected officials under the age of 35 represent only about 10 per cent of councillors. “And municipal politics has a huge impact on our lives, influencing everything from roads and transport to where we live.”

Wiseman points out that there’s no shortage of young activists involved in campaigns like the Occupy movement or surrounding the environment, even as they ignore the political process. “This isn’t translating, and that’s deeply troubling and disappointing,” he says. “There are obviously some deeper questions that we have to ask ourselves about how we’re governed and how we want to be governed.”

Not only the young

Generational differences in political support were the focus of the research by Vince Hopkins, MA (public policy & public admin.) 12, who examined whether political authorities had a role to play in the fact that people are less motivated, and whether improvements in democratic performance might be relevant.

Hopkins’s research compared eight provinces, and found generally very low levels in the responsiveness of politicians and government to the demands of citizens. “At the most, no more than 25 per cent of Canadians, regardless of province, believe they have a high degree of responsiveness,” he says.

The research had three goals: To examine whether Canadians think of their governments and elected officials as responsive, to investigate inter-generational differences, and to test whether these attitudes impact political support. “Our findings show some intergenerational difference, but it was neither consistent nor linear. What this suggests is that older Canadians are not necessarily more likely to have a high degree of faith in the responsiveness of their government,” Hopkins says. “Province does matter, though, and Quebec is at the lower end of the scale.”

Research by Kerry Tannahill, a PhD student in Concordia’s department of political science, has found that the younger generation is more likely to challenge institutional authority than those before them.

She reports that previous research that looked at “cultural explanations,” such as a change in values, “suggest that younger generations have become less deferential and more inclined to challenge institutional authority than older, more materialist generations.” Her new research shows that the reasons for Quebecers’ distancing from the political process may stretch beyond just cultural or demographic characteristics.

In collaboration with supervisor Mebs Kanji, associate professor in Concordia’s Department of Political Science, Tannahill investigates political support for different elements of Canadian democracy. Data collected after the last provincial election indicates that support for political authorities, including political leaders and elected representatives, is quite low across all levels of government. More specifically, she adds, “Only three per cent of Quebecers like all of their current leaders and elected representatives at all three levels of government.”

As reported in the Open Journal of Political Science, Kanji and Tannahill also examined support for different political institutions — including political parties, government and the civil service. They compared public opinion in Quebec to those in seven other provinces (using data from the Comparative Provincial Election Project ). They reported, for instance, that satisfaction with provincial government performance is lowest in Quebec: 36 per cent report being satisfied.

In early 2014, Kanji and Tannahill intend to go into the field again to examine whether Quebecers’ views of the political system and its performance have changed. Given ongoing allegations of poor performance by authorities and institutions at all levels of government, they expect that problems of political support may not go away.

It’s not as simple as claiming young people are apathetic, maintains Brandi Bell, PhD (comm.) 09. Now research coordinator at the Comprehensive School Health Research Group at the University of Prince Edward Island, Bell has studied the conflicting perspectives, tensions and compromises that have marked representations of youth citizen participation over the years. “It’s easy for us to say they’re not participating or not engaged, but are we looking in the right places?” she asks.

There are countless strong examples of youth active in the environmental movement and within their communities, Bell adds, which begs the question of their lack of participation. At the same time they face constraints such as student debt and high unemployment. “So can you blame young people? Are politicians talking about the interests of youth?”

Valerie Milette of Concordia’s live centre says, “I see a lot of students being engaged, either with a cause in which they’re interested or they want to start their own project. They might not be engaged in politics, but they’re engaged in something.”

Youth have gained a reputation for lagging behind not only in political but volunteer and community interest. That’s not what Valerie Millette, BAdmin 03, MSc (admin.) 05, sees. She heads Concordia’s Leadership, Initiative and Volunteer Engage (LIVE) Centre. Opened in 2010, the centre focuses on centralizing information about volunteering at the university or in the city. “Our engagement has been increasing since we began,” says Millette, who believes that young people are getting a bad rap.

Rather than being disengaged, the number of students visiting the LIVE Volunteer Resource Centre since January 2011 has increased by about 200 per cent, she says. Young people are also volunteering more than any other age group. A study by Volunteer Canada, Bridging the Gap, shows that from 1997 to 2007, 15- to 24-year-olds “are the group who volunteer the most hours, and that average is increasing.” (See the above chart, “Volunteer rates separated by age.”)

Why is this happening? Research by the Réseau de l’action bénévole du Québec reveals that 90 per cent of young people volunteer to support a cause they believe in, 70 per cent to explore their strengths and 55 per cent to improve their employability. “I don’t know much about engagement in the political process, but I see a lot of students being engaged, either with a cause in which they’re interested or they want to start their own project. They might not be engaged in politics, but they’re engaged in something else,” Millette says.

Research from Volunteer Canada shows that volunteerism among younger age groups has grown in recent years,

We should be concerned, however, in the lasting effects of electoral disengagement, says Ilona Dougherty, BA 03, co-founder of Montreal-based Apathy Is Boring, an organization that seeks to broaden civic participation among youth. “If you don’t vote the first two times you’re able, the likelihood is that you won’t vote for the rest of your life,” she reports.

When she was a student of contemporary dance and community and public affairs at Concordia, Dougherty became frustrated that friends were not interested in democracy and voting. She wanted to explore the interaction between art and social change.

Soon after she helped launch Apathy Is Boring in 2004, the group focused on mass mobilization and used music as a vehicle. “Ten thousand people attended our biggest concert during the 2008 federal election,” she says. At the 2011 federal election, they mounted a Facebook campaign asking for a pledge to vote — 78,000 young people did, and 250,000 invited their friends to pledge. The organization has since shifted to not only focus on youth mobilization but also a research-based approach, working with academics on youth apathy and civic engagement.

Even social movements don’t reach across the entire youth population, says Dougherty, who as a student protested at the 1999 World Trade Organization meeting in Seattle. “We have to find low-risk entry points — even if you might not want to protest, there are other ways to get involved.” And citizens must be engaged not just when they vote but by holding elected officials to account. “We, the citizens, are the bosses of our elected officials, so if the boss is paying attention, they’re not going to slack off.” 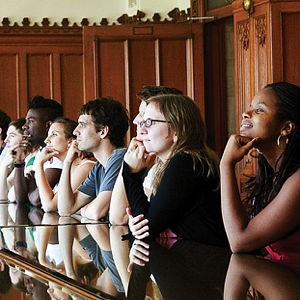 Because citizens become disengaged when they don’t feel the system is working, the future in this tech-driven world holds even less promise for new voters, Dougherty says. Traditionally, those seeking election would wage a ground war: knock on doors, meet with the community. Now that has shifted toward air wars: TV ads, debates.

“We know that the air war will not engage a first-time voter,” she says. “What gets someone to vote and to volunteer — and I know this first hand through my role as chair of the board of Volunteer Canada — is talking to someone in person, having someone ask you to get involved, whether a political candidate, friend or professor. We’re seeing less of that.”

Yet evidence shows there’s not a lot of effort on the part of politicians to engage young people or to be open to that engagement. Wiseman suggests a Catch-22, a vicious circle in which youth doesn’t see itself reflected in political organizations or candidates, so it ignores the process. Politicians see youth not coming out to vote, and don’t bother representing them.

As Hopkins says, “When citizens perceive political representatives as being highly responsive and staying connected, they evaluate them in a more positive way. The data from our research lets us drill down into municipal-level politics and for the first time look at the link between responsiveness and support at the political level.” In other words, people who feel that government cares are more likely to have confidence in government. Bell adds, “I’m not an expert on the politics, but it feels like the political system within Canada needs to change.”

— Donna Nebenzahl is a part-time faculty member in Concordia’s Department of Journalism.