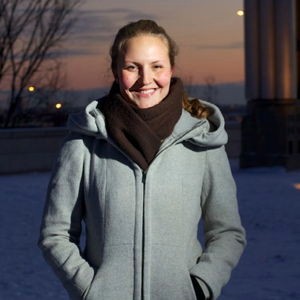 Favourite Montreal spot: Athena Tacet at the Canadian Centre for Architecture grounds on René-Lévesque Boulevard. She adores the view and architectural surroundings.

I vividly remember arriving at Montreal’s Pierre Elliott Trudeau International Airport from Paris on August 23, 2006. While fatigued from the long trip, I still recall the indescribable delight of setting out on my journey as I was about to begin studying political science at Concordia.

At age 17, I was joining more than 160,000 students who attend one of Montreal’s four universities each year. I was also among the thousands of non-Canadians at Concordia — today it’s 6,300 out of a total of 46,000-plus — who come from more than 150 coun­tries around the globe, from Australia to Zimbabwe. Since then, I’ve met students from countless nationalities, and through their cultural perspectives I’ve travelled the world. (Concordia students can also literally travel the world through exchange programs; see “Students break away for a semester abroad” on page 17).

Like my fellow international students, I was full of enthusiasm and some anxiety — yet couldn’t have imagined that the time I would spend at the university and city would become the most significant of my life.

I attended Concordia’s fall orientation, where I was advised that my stay would be sometimes difficult but ultimately enriching, and that it takes about seven years of ups and downs in a new city before finally starting to feel at home. Seven years later, I can confirm that’s true.

I’m also among the significant number of international students who settle in the city: about 20 per cent of those who come from elsewhere to complete an undergraduate degree in Quebec remain after graduation, according to consulting firm SECOR.

While the programs and professors at Concordia and its sister institutions play a major role in drawing young people, the city’s charms certainly add to that. Affordable, friendly and open, Montreal topped the 2013 rankings by The Economist and China’s Bank of Communications for best-value destinations for foreign undergraduates. British lifestyle magazine Monocle calls Montreal “Canada’s cultural capital” — a nod to the city’s inimitable art, museums, festivals and mid-Atlantic fusions of style, design and architecture. And a new QS (Quacquarelli Symonds) international ranking of best student cities placed Montreal tops in Canada, second in North America and ninth in the world.

I talked to three fellow international alumni who stayed here after graduation and, like me, fell in love with our adopted city.

“In Montreal, everyone seems to come from every part of the world,” says American-born Amy Hernandez, BA 08. 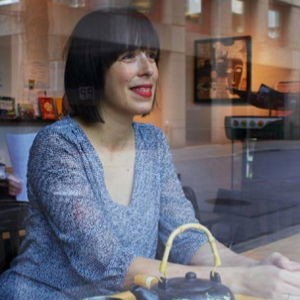 Her new city is a long way — in distance and mindset — from Hernandez’s birthplace of Wamego, Kansas, home of the Oz Museum, which is dedicated to the world of the Wizard of Oz. After following the (yellow-brick) road northward, Hernandez was surprised and pleased to find the American notion of “melting pot” didn’t apply here. “In the States, you kind of assimilate into being American, upholding American values. But here, everybody can keep their own,” she says. “I really appreciated this patchwork of cultures because you can see through others’ eyes what their traditions are and who they really are.”

Hernandez, who’s now an assistant in Concordia’s Department of Contemporary Dance and a recently minted Canadian citizen, savours Montreal’s summer joie de vivre. “We don’t have terraces in Kansas — it’s usually too hot or too windy. But in Montreal it’s just perfect, especially in the Plateau neighbourhood,” she says. “I try to look at Montreal from the viewpoint of a person I went to high school with in my hometown, and I always wonder: ‘What would they think of this amazing place?’”

Of course, there’s no such thing as a free lunch; Montreal exacts its price through unpredictably wild winters. That reality often shocks foreign students during their initial snowstorm encounters. When I first woke up to 50 centimetres of snow in front of my window, I thought, “I was on a terrace baking in the Indian summer yesterday. What happened?”
Concordia’s International Students Holiday Party, organized by Advancement and Alumni Relations every December, is one way to help warm things up. The gathering pulls in some 300 international students who can’t make it home — often to warmer climes — for the holidays.

Veteran Montrealers learn to survive its sub-zero temperatures and enjoy winter through activities, from ice skating at the Old Port to day trips to sugar shacks. For Hernandez, though, the first January bit hard — she arrived from the American Midwest with only a thin wool jacket, her thickest garment. “It wasn’t until my second winter, after I received money from my parents and bought a heavy, fluffy coat, that I thought, ‘Winter isn’t so bad after all if you have good clothing and warm boots.’”

Another challenge — or appeal — for some is the French factor. International students without knowledge of the city’s official language can find it difficult to adjust. Hernandez, rather, tackled a degree in études françaises at Concordia after spending a year volunteering. “I really wanted to immerse myself in the culture and language, and since I didn’t know a word of French when I started my degree, I just threw myself into it. I wouldn’t recommend it to everybody,” she says, laughing. “But I have seen over time the great value of having both languages.”

Other influences, such as falling in love with a Québécois, helped coax Hernandez to plant roots. “He’s now my husband of eight years,” she says. The couple have two young children, and she feels it’s important both speak French, regardless of whether Kansas one day beckons. “I even looked for a French school there in case we had to move back. It is very important to me to pass that on to my children.”

She has no plans to return home, though. “Staying was just a progression for me, an evolution. I learned how to appreciate the Kansas I wanted to escape and the Montreal that I have an indescribable bond with.” 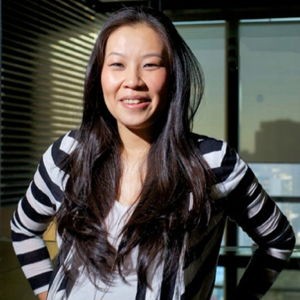 Yitian (Michelle) Su, BA 11, came from China to Montreal 10 years ago for Concordia’s urban studies program. Today she’s a homemaker in Montreal, expecting her second child. Su had considered a Dutch university but chose Canada for its multiculturalism and welcoming reputation. “I knew that Canada would give me more choices and opportunities after I graduated from university,” she says.

Campus activities, such as those offered by the Concordia International Students Association (CISA), broadened Su’s horizons. “In my first year, the only thing I did was study,” she recalls. “But as of my second year, I got a chance to volunteer for CISA’s orientation.

I enjoyed meeting students from all over the world and then decided I would run for a position at the end of the year.”

Su later joined CISA’s executive team — the best decision she ever made, she says. “In order to organize successful events, we had to deal with our own cultural conflicts and different mindsets.”

Ali Mohammadi, BComm 01, who came from Iran at age 21 to attend Concordia’s John Molson School of Business, also quickly took to his new habitat. “The place you do your studies is the place you feel at home, and it genuinely feels like home here,” Mohammadi says.

When Mohammadi landed in the city in the late 1990s, he found solace in the CISA and the International Students Office (ISO).

“I arrived here the week of my birthday and I was staying at the old YMCA building on Stanley,” Mohammadi recalls. “The morning after, I get a knock on my door from an ISO volunteer who welcomed me to Canada and Concordia. He invited me right away to an event.” 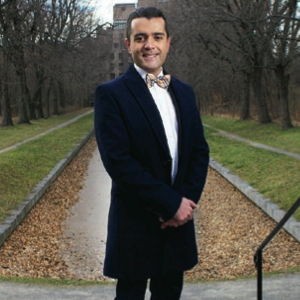 Favourite Montreal spot: Ali Mohammad at Collège de Montréal on Sherbrooke Street. The college is among his most cherished local sites because it features one of the city’s oldest buildings.

A challenge for any traveller is getting used to local foods. Yet for those who miss their mother’s cooking, Montreal offers many options. “The first thing that struck me was the number of cultural restaurants here,”says Mohammadi. “They even have Persian ones! When I first came, I thought, ‘Look at this gastronomic hub.’”

Unlike Hernandez, he wasn’t bothered by his first winter. “As Iranians, we learn to adjust,” says Mohammadi, who’s now president of Montreal web concern Global Access Group. “Winter in Montreal has never been a problem for me.”

The city’s bilingual demands weren’t a negative issue for Mohammadi — he saw it as a pleasure as much as a necessity. “The main reason I came here was because it’s the place where French and English meet — I was able to learn French and use my English,” he says.

And while Hernandez’s amorous tale of finding her love in Quebec is certainly sweet, it’s not unique. Mohammadi, who headed CISA in 1998-99, recalls a heart-stopping moment during a Quebec City day trip. “I was in charge of counting the students on the bus on our way back to Montreal. As I realized that we were 96 instead of 98, I started pan­icking,” he recalls.

Mohammadi learnt — days later — that the absent couple had previously known each other but became better acquainted during the excursion. “They fell in love, decided to stay and spend a romantic night in Quebec City. They ended up marrying, which is actually pretty com­mon in CISA.”

From romance to professional ambition, each student who remains in Montreal has his or her own reason. I stayed to pursue a graduate diploma in journalism at Concordia, a step toward my lifelong dream of becoming a journalist. The city has done the rest. As Mohammadi puts it, “Although most of us come from different backgrounds, Montreal has this ability to attract like-minded individuals and bring us all together.”

This article originally appeared in the Winter 2014 Concordia University Magazine.