I sat restlessly in Concordia English professor Mary Di Michele’s office watching a sunny, slushy day pass by on Bishop St. I couldn’t wait to get out there. We were reviewing her notes on my poetry portfolio when she asked what I was up to for summer. I would be a cruise ship hostess in northern Europe, I explained.

“Travel — good!” she said. “Go and live; that’s where you’ll find things to write about.” 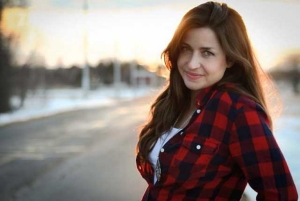 Emily Southwood’s first book will be released in fall 2013.

Yes, yes, I thought. Live voraciously; write diligently — I’m on it. Okay, at least the first part. I was 21, primed for adventure. During my BA in honours English and creative writing, I persuaded my parents to allow me to spend two semesters travelling South America. Over summers, I clocked into odd jobs — the ones a poetry degree qualifies you for and, hopefully one day, qualify you to write poetry. I made my way as horseback trail guide, diner waitress, Ecuadorian ESL teacher, leader of onboard Frank Sinatra singalongs.

By 2002, I sat clad in cap and gown, unknowingly a few seats down from my future husband: Robert Vroom, BA (comm. studies). We’d meet a year later through mutual friends.

In 2006, I left Montreal for Vancouver to pursue an MFA in creative nonfiction at the University of British Columbia. True to Mary’s advice, I often called on my adventures for writing fodder. Meanwhile, Robbie and I stayed together long distance. He was in Los Angeles garnering a master’s in cinematography at the American Film Institute. After graduating, we got engaged and settled in L.A. — the better for Robbie to break into the movie industry. Soon, he landed a job filming a reality TV show.

“So you’ll be filming buxom, bronzed women in all manner of acrobatic undress?” “Pretty much.”

“Perfect!” I exclaimed, “All in the name of research — bring it on!”

I’d never been a fan of pornography. Suffice it to say, I knew how my gender was referred to in skin flicks and I preferred something more along the lines of “goddess divine.” Nonetheless, we had sizeable student debt to contend with. That, coupled with my aversion to being a bossy wife, meant that I said: Okay, honey, take the job.

The next eight months found me often wishing I could go back and savour my words. At one point, during a lively dinner discussion about how starlets pass their “best before” date at 23, Robbie smiled slyly and said: “I bet you’ll write about this one day.” “Yeah, I’ll get right on that,” I replied with an eye roll.

Recently, we left L.A. for Vancouver, where Robbie shot another reality show, this one about cops in the Downtown Eastside. Who knew the Valley could sound glamorous by comparison? Then, as fate would have it, the filming of his first movie, Three Night Stand, returned us to Montreal. Our latest adventure has been starting a family here. As for my next writing project, I’m thinking something fictional might be nice. Nonetheless, I’ll still aim to follow the advice — go forth and seek new experiences — even if I do seem to be travelling in reverse.

Emily Southwood (emilysouthwood.com) has written for The Huffington Post, The Globe and Mail and Elle Canada.