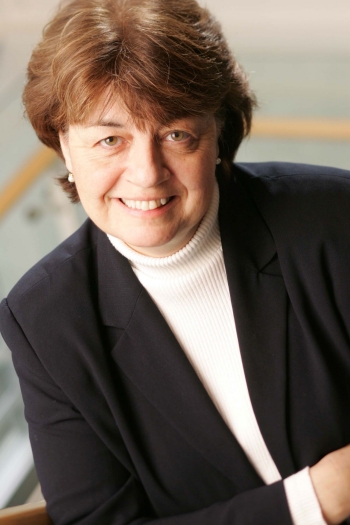 “There was a thing in the 1980s that an MBA and an engineering degree were a magic combination,” Pichler says.

Gillian Pichler, EMBA 87, knows one value of an MBA. “You just learned how to live without sleep,” she says with a carefree laugh appropriate for someone at the brink of retirement. “It served me well. I can still live without sleep!”

But there are, of course, more serious benefits, she adds, from learning how to conduct an analysis from a financial perspective to learning more about an individual person.

Pichler, who also holds a degree in mechanical engineering and a management diploma from McGill, has a reputation for fairness, diligence and thoughtfulness. She is about to conclude a 30-year tenure with Engineers and Geoscientists BC, where she served as the British Columbia organization’s director of registration and now works in an advisory capacity.

Pichler has found herself decidedly in the gender minority throughout her academic and professional careers, but it hasn’t bothered her. A member of the first Concordia Executive MBA (EMBA) cohort, she was one of five women in the first class that entered in 1985. She can reel off the names of her female (and many of her male) classmates and confirms, as do most grads of the John Molson School of Business program, that the friendships and network she established have lasted decades.

Born and raised in Montreal, Pichler was in charge of facilities, plant and production engineering at Gillette’s manufacturing facility near Décarie Circle, where she spent 16 years overseeing a team of engineers, technologists and draughtsmen — these days called drafters.

When she and a male colleague approached the company president for permission to enroll in the new Concordia EMBA program, he didn’t hesitate to say yes, and Gillette paid her tuition.

“There was a thing in the 1980s that an MBA and an engineering degree were a magic combination,” Pichler says.

Three years after she graduated, the magic ended when, calculating the effects of the 1989 Canada-U.S. free-trade agreement, Gillette pulled its manufacturing facilities back to the United States and closed the Montreal plant.

Having an EMBA brightened Pichler’s career prospects, and she soon landed a position with the engineers’ organization, where she was responsible for all registration and licensing activities, and was involved in national and international activities at Engineers Canada.

The EMBA program taught her to analyze processes financially, Pichler says, which helped as “we modified and expedited many processes” and took steps to quicken the pace of decision-making, which she found slow compared to industry.

“I found it challenging to be working in a non-profit,” she says, adding that she implemented changes to the organization’s assessment model which have since been adopted in almost every province. Other changes included instituting new ways of assessing international engineers and the implementation of online exams to address the challenges of the COVID-19 era.

“All of the EMBA courses helped me, even though it was a non-profit,” Pichler says.

“Gillian has been an incredible contributor to our organization,” said Ann English, chief executive officer and registrar of the organization, in a statement announcing Pichler’s retirement. “When people think of Gillian, they think of someone who puts fairness at the forefront.”

Thanks to the substantial support and encouragement Pichler received from the faculty, staff and her fellow EMBA classmates, the biggest lesson she learned during the program was about herself.

“I learned that with the proper support and milieu that I could do it — while raising children and working full-time and doing the things that all the other people were doing,” Pichler says. “All these different classmates from a wide variety of backgrounds were so determined to do this, and they did it with such dedication, humour, lack of sleep. They got through it; they supported each other.

“I took away more about the determination and the support that came with kind of going through war together. That was a real growth moment for me.”