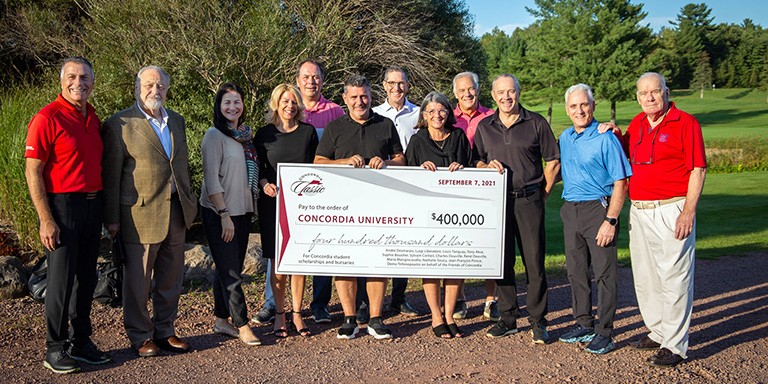 After a one-year hiatus due to the pandemic, the Concordia Golf Classic, the university’s annual fundraising golf tournament, returned in a big way on September 7.

Thanks to the generous support of sponsors and participants, the tournament raised an impressive $400,000 for students — the second highest total in the tournament’s 17-year history.

The event has raised more than $6.4 million for student bursaries and scholarships since it first launched in 2004.

All funds raised through the Golf Classic contribute to the Campaign for Concordia. Next-Gen. Now. The university’s most ambitious campaign that aims to deliver next-generation teaching and learning to Concordia students.

“The Concordia Golf Classic is one the university’s preeminent fundraising initiatives,” says Concordia President Graham Carr. “We are immensely grateful to all the participants and sponsors who help make this event a success year after year.

“Thanks to their generosity and commitment, hundreds of Concordia students have benefitted from financial assistance, helping them succeed and thrive.”

This year’s event welcomed nearly 120 participants to Golf Griffon des Sources in Mirabel. The tournament is the only fundraiser in Quebec that brings together executives from Canada’s nine major banks.