While the McCord Museum is closed, it offers content accessible through electronic devices, including Griffintown — Evolving Montreal.

Montreal has become known — somewhat infamously — for the persistent orange construction cones and signs that constantly dot the city. Amidst this backdrop, Suzanne Sauvage, director of the McCord Museum, and Hélène Samson, curator of photography, decided to curate the new exhibit, Evolving Montreal.

Over the next few years, the McCord will commission photographers to capture the frenetic pace of change in different areas of Montreal.

The first, Griffintown — Evolving Montreal, which opened on February 7, features works by accomplished photographer Robert Walker, BA 69. Griffintown was an apt subject to kick-start the Evolving project; few Montreal neighbourhoods have undergone such rapid development over the last decade.

Walker has been widely exhibited in the United States, Canada and Europe. After he graduated from Concordia, he moved to New York and lived there for a decade. Walker’s photographs of the city served as the basis for New York Inside Out (1984, Oxford University Press), a book that featured an introduction by William S. Burroughs.

Walker’s latest book, Colour is Power (2002, Thames & Hudson), acted as a catalogue for an exhibition of the same name that travelled to six museums in Europe. We caught up with the alumnus as his exhibit at the McCord was unveiled.

How did you get into photography?

Robert Walker: In the mid-70s, I took a photography workshop at Galerie Optica as a lark with the American master Lee Friedlander. He was very encouraging of my first efforts so I started to take it more seriously.

Why did you choose to photograph Griffintown in particular? Do you have a personal attachment to the neighbourhood?

RW: When I was proposed the project to photograph Griffintown, at first I was ambivalent. I had no personal attachment to the neighbourhood or even knowledge of its boundaries. In my mind’s eye, I only saw a dilapidated district of row houses and derelict factories and warehouses along the Lachine Canal.

After my first exploratory foray into the area, I was delighted to find this was not the case. I discovered a beehive of activity and contrasting subject matter, from demolition and construction to rusting 19th-century bridges and ‘horse palaces,’ all highlighted against the dynamic Montreal skyline. My original doubtfulness and anxiety quickly dissipated in this photographic paradise! 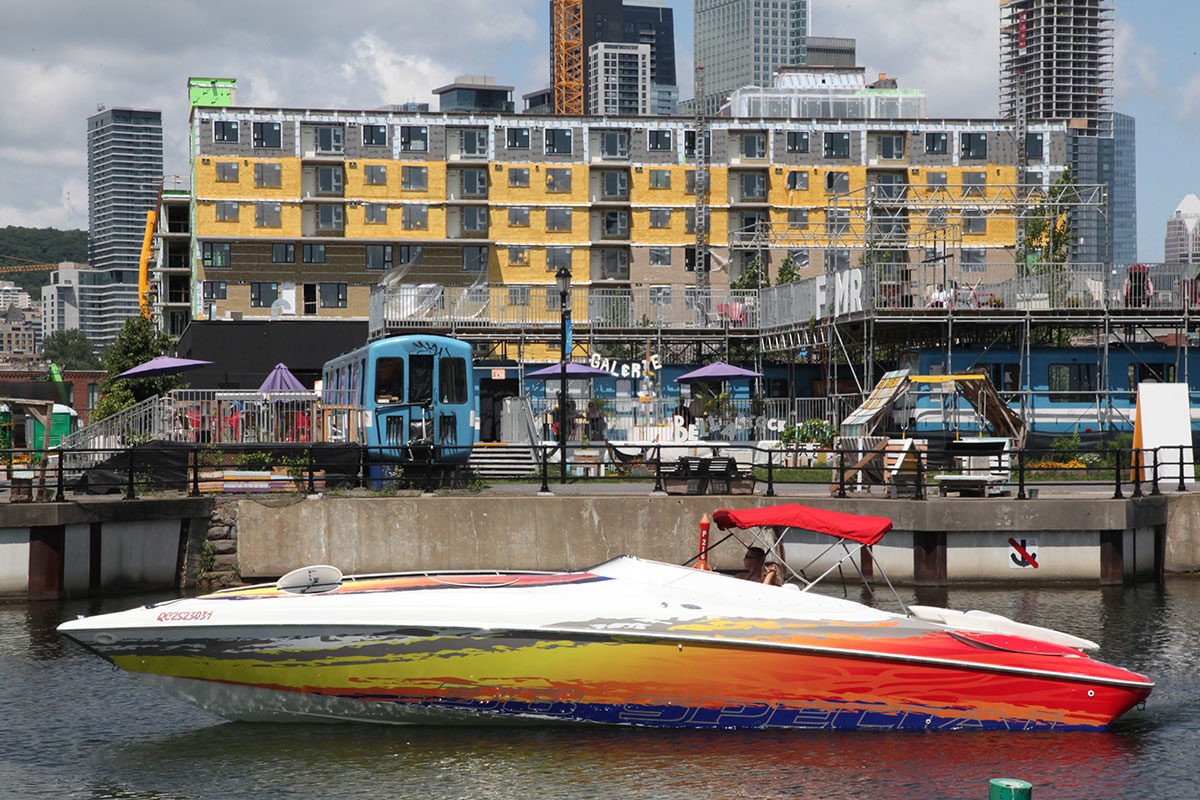 What were you trying to capture with these photos?

The transformation of Griffintown is already laden down with heavy baggage. There are many who feel that it is a textbook example of unbridled capitalism run amok. The whole notion of urban planning seems to have been thrown out the window in what looks to be a random binge of condo construction. Knowing this, I approached the subject with no hidden political agenda. I photographed what I thought was beautiful, what was ugly, with a democratic eye. I wanted to produce an accurate and honest personal depiction of Griffintown, then let the pictures speak for themselves.

When I attended Sir George Williams University in the mid-60s, photography was not even offered in the curriculum. I studied drawing, design and painting. I recall the design exercises being particularly rigorous and painful at the time but they served me well in the long run.

In terms of painting, abstraction was fashionable in the 60s and the organization of line and colour on a flat picture plane was a technique I could later transfer to my colour photography. When I frame a picture with my camera, at first I ignore the literal subject matter and organize the picture as an abstraction, as if working on a blank canvas.

After a project is completed I like to start on something new immediately. In a way, it’s like being an athlete or a musician. If you lay off too long, you lose your edge. I have started to work on the Gay Village. This area seems to attract a whole host of exotic and eccentric characters and in the summer, a theatrical atmosphere exists on the street. Let’s see how it goes.