'I couldn’t believe the Aboriginal Sport Circle chose me' 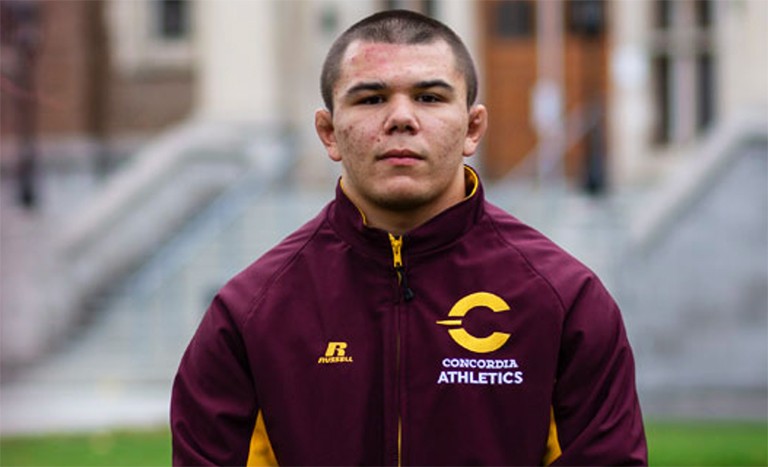 Concordia Stinger wrestler Connor Church is the recipient of a prestigious Tom Longboat Award presented annually to Aboriginal athletes for their outstanding contribution to sport in Canada.

The awards were established in 1951 and with few exceptions have been given out every year since their inauguration. They are one of the most prestigious awards for Aboriginal athletes in the country.

A national working group organized by the Aboriginal Sport Circle selects a male and female recipient each year. Church and rower Leah Miller are the 2022 winners and were honoured at the Canadian Sports Hall of Fame Gala at the Metro Toronto Convention Centre on October 6.

“I found out I won the award two to three weeks beforehand and I didn’t really know what to think,” said Church who is a second-year Marketing student in the John Molson School of Business. “I wasn’t aware of how prestigious the awards are. When I did my research on the award I was overjoyed to have been selected. I couldn’t believe the Aboriginal Sport Circle chose me.”

The 19-year-old Métis wrestler wasn’t able to attend the ceremony because he was representing Canada at the Spartan Cup in Puerto Rico. His parents, Maralee Caruso and Jason Church, accepted on his behalf. 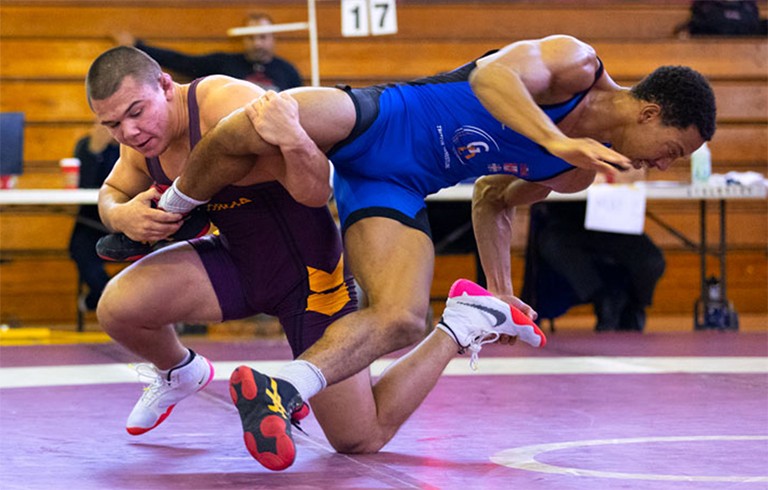 Church’s journey from a young teenager, who was mostly interested in mixed martial arts, to an accomplished wrestler representing Canada on the world stage has been incredible.

Growing up in Winnipeg, he competed in Jujutsu tournaments and had success as an amateur boxer with 53 bouts to his credit. Then in 2019 Church decided to try out for the Manitoba provincial wrestling team. Through that undertaking, he met Olympian Leah Ferguson and accepted an offer to train with her.

“Leah turned into my wrestling coach and she recommended I come to Montreal to pursue my career,” he said.

Church moved to the city last year to begin his university studies and to train with Concordia and its highly-respected coaches who also oversee the Montreal Wrestling Club. It proved to be transformative.

“I came out here with no accomplishments,” Church said. “All my success comes from being at the Montreal Wrestling Club and Concordia. The coaches really know what they are talking about. I’m a completely different person and wrestler now. It’s night and day from when I first showed up here.”

In May, Church competed at the Canadian National Wrestling Trials in Edmonton and won a gold medal in the junior freestyle 79 kg category.

In July, he won a bronze medal at the U20 Pan-American championship, which included wrestlers from the United States, Brazil and Jamaica to name a few countries.

The following month, he won a gold medal at the Canada Summer Games and then headed straight to Sofia, Bulgaria where he finished 17th at the U20 World Wrestling Championships.

At the university level, he won a gold medal at the McMaster University tournament in October and was a silver medallist at Concordia’s tournament last Sunday.

Tom Longboat was an Onondaga distance runner from Six Nations of the Grand River. He was one of the most famous athletes of the early 20th century with his successes known across North America and beyond. He was a leader in establishing marathon running as an international sport and won many marathons in record-breaking times. Longboat was the first Indigenous person to win the Boston Marathon (1907). He competed for Canada at the 1908 Olympic Games. He was inducted into Canada’s Sports Hall of Fame in 1955 as part of its inaugural class. (The Canadian Encyclopedia).