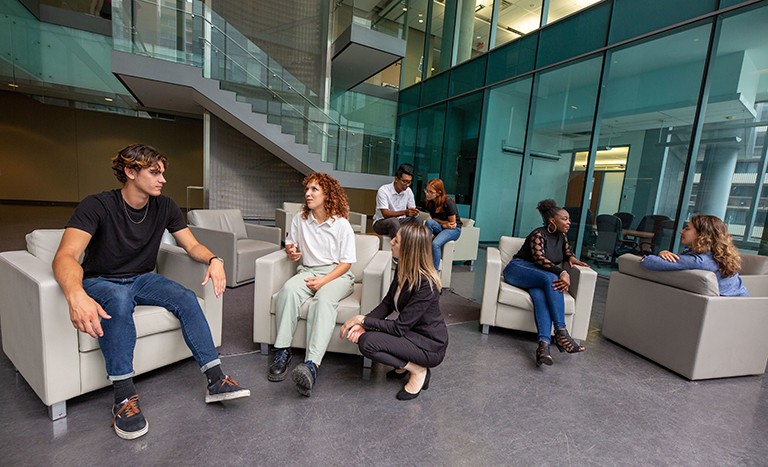 Registration is now open for Délie ta langue!, a yearly speech contest hosted by Université de Montréal. As part of the Office québécois de la langue française’s programming, the contest aims to promote the French language among undergrad students at several universities in Quebec and Ontario.

The contest involves selecting a French expression and delivering a five-minute oral presentation analyzing and connecting it to a broader social issue. Concordia’s Département d’études françaises will provide training and resources to prepare participants to write and perform speeches.

“We are pleased to promote this contest among our students,” says Concordia President Graham Carr. “Students get the opportunity to improve their French communication and build confidence and stage presence. Experiences like these also contribute to the success of students’ academic path and give them a competitive edge in the job market.”

Délie ta langue! offers several cash prizes. Concordia’s finalist will receive an additional prize from the Département d’études françaises, which will also host a ceremony to honour all Concordia participants.

The deadline to submit a five-minute video presentation is November 14.

Motivated by her desire to get out of her comfort zone and express herself creatively, Astrid Aguy, BA 22, joined last year’s contest to grow on a professional and personal level.

“Délie ta langue! isn’t just a public speaking contest; it’s a rich personal experience with opportunities to gain many communications skills. It shakes you up by putting you face-to-face with your insecurities,” says Aguy, a previous Concordia finalist.

She relates that her greatest challenges were performing a speech in front of a crowd and delivering convincing content. Aguy appreciated learning how to build a compelling speech with emotional appeal at the workshops offered by the university.

As a graduating student, she also saw the contest as a way to mark her undergrad years.

“Being involved in a major project before leaving university was something I’d always wanted, but the pandemic made that difficult,” Aguy says. “Délie ta langue! was the perfect opportunity for me to end my time at school on a high note.”

Jonathan Dessalines, another previous finalist, says participating in the contest enriched the way he intervenes in everyday conversation. The workshops provided him a space to explore himself through writing and presenting.

“If you love language, it’s a marvelous way to get in touch with it in a critical, safe and inspiring environment.,” he says. “When you finish this, you’ll look back and you won’t believe you did it.”

Interested in competing this year? Check the contest’s rules and eligibility criteria on the Délie ta langue! website. Participants must shoot a short video and submit it online. In December the university will select a first round of finalists, who will receive training prior to a second selection in the winter.

The chosen Concordian will go on to compete in the contest finals in March 2023.

For questions about the contest, contact the Délie ta langue! team at delietalangue@umontreal.ca. Learn more about Concordia’s Département d’études françaises.