After two mainly virtual editions in 2020 and 2021, the Fantasia International Film Festival is making its way back into the cinemas of Montreal with a lineup of more than 130 feature films and 200 shorts.

Screenings, panels and special events will take place in Concordia’s Alumni Auditorium (H-110) and the J.A. de Sève Cinema, with additional screenings at the Cinémathèque Québécoise, Cinéma du Musée and the McCord Museum.

This year’s event features 18 films by Concordians including I Had a Dream of a House at Night, directed and hosted by Concordia film animation student Charlie Galea-McClure. Galea-McClure’s film is the winner of this year’s Fantasia Award.

A short, animated film, it focuses on a journey into the depths of the mind and reveals what lies behind the surface of reality.

“Revel in the shape of darkness, Where shadows emerge and phantoms lurk, In the camouflage of an unnatural night.”

Here are 17 other films directed by Concordians that will be presented at the genre film festival.

Directed, written and produced by former Concordia student José Luis Saturno, La Melodía Torrencial is a seven-minute-long short film that will be available in Spanish with English subtitles. Saturno’s film is about a man who is capable of summoning rain with the music of his accordion, and gives hope to a village suffering a long drought. This short was also selected for Animafest Zagreb.

Directed, and written by Concordia alumna Noncedo Khumalo, BFA 16 (film animation), 100 Ghosts is an animated short about a woman who wakes up to mysterious sounds and “confronts an astonishing surreal world summoned forth by her innermost fears.” Khumalo’s two-minute-long short was produced as part of the 13th edition of the NFB’s Hothouse apprenticeship. 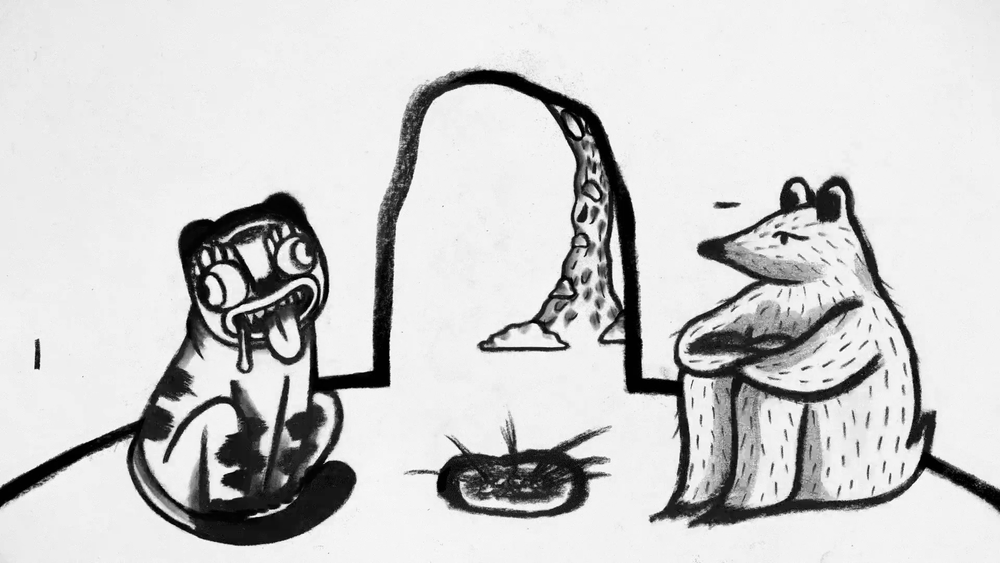 Concordia alumna Grace An, BFA 16 (film animation), directs a short two-minute-long animated film in which a passage from Korea’s creation myth becomes a timely reflection on isolation and transformation.

Nounours tells the story of a girl and her teddy bear as she grows up and they grow apart. The short three-minute-long animated film was directed by Concordia alumna Lou Rigoudy, BFA 11 (film animation), and will be presented in French with English subtitles. Rigoudy’s film was also selected for the Athens International Film and Video Festival, Seattle International Film Festival and Buenos Aires International Cine Independiente Film Festival.

“Are we there yet? When the kids act up in the back seat, a family road trip gets knocked hilariously off course.” The short one-minute-long animation was directed and written by Concordia alumnus Louis Bodart, BFA 19 (film animation), 100 Miles was produced as part of the 13th edition of the NFB’s Hothouse apprenticeship.

“Following the viewing of a strange video, a young woman becomes dangerously obsessed by the ASMR phenomenon, to the great displeasure of her roommates.” The 12-minute-long film was written and directed by Concordia alumnus Maxime S. Girard, BFA 19 (film production). The film will be available in French with English subtitles.

Written and directed by Concordia film production student Gaëlle Graton, L’autre rive tells the story of Genevieve, a new employee at a homeless shelter who is shocked to meet Camille, a young woman whom she believed to have successfully reinserted while being her social worker in the past. This 18-minute-long film will be presented in French with English subtitles.

Graton’s film was presented at Festival Prends ça Court and the Regard Festival, where it was awarded the Prix du public Compétition Parallèle.

“In a frenzied attempt to break the isolation, a man drums his head against the wall, unleashing a battery of brightly hued hallucinations.” Written and directed by Concordia alumnus Lukas Conway, BFA 20 (film Animation), this one-minute-long short animation was produced as part of the 13th edition of the NFB’s Hothouse apprenticeship.

Bedroom people is a five-minute-long short about a man who searches through documents of an unknown USB key and discovers a strange series of recordings. Written and directed by Concordia alumna Vivien Forsans, BFA 22 (film animation and film studies), this film was also presented at the Concordia Film Festival, where it was awarded Best Film Award, and at the Trinity Film Festival  where it was awarded Best Sound Award.

Directed by Concordia film production student David Gaudette, Body of Light tells the story of a young girl who is “left to herself while her grandfather takes a long sleep. She resolves to offer him eternal comfort in her last moment with him.” Gaudette’s short nine-minute-long film was also presented at Rendez-vous Québec Cinema and at the Future of Film Showcase. It is available in French with English subtitles.

Written, produced and directed by Concordia alumnus Mitchell Stafiej, BFA 13, MFA 18, The Diabetic is about 30-year-old Alek who returns home to Montreal’s West Island in the hopes of reliving his teenage “glory days.”

“He finds that most of his friends have moved away or moved on within the dull comforts of suburban life. Only Matt, one of Alek’s old acquaintances, is free to spend the night. Tensions quickly mount as Matt represents everything Alek hates about suburban life and Alek seems unwilling and unable to let go of his rose-tinted dreams of the past. Things go from bad to worse as the night goes on, and Alek’s dream turns into a nightmare.”

The 94-minute-long film will be presented in English and Polish, with English subtitles.

Written and directed by Concordia alumnus Devan Marinaccio, BFA 21, The Shifting Dark is a short three-minute-long animated film about a woman and her cat who search for a missing person. 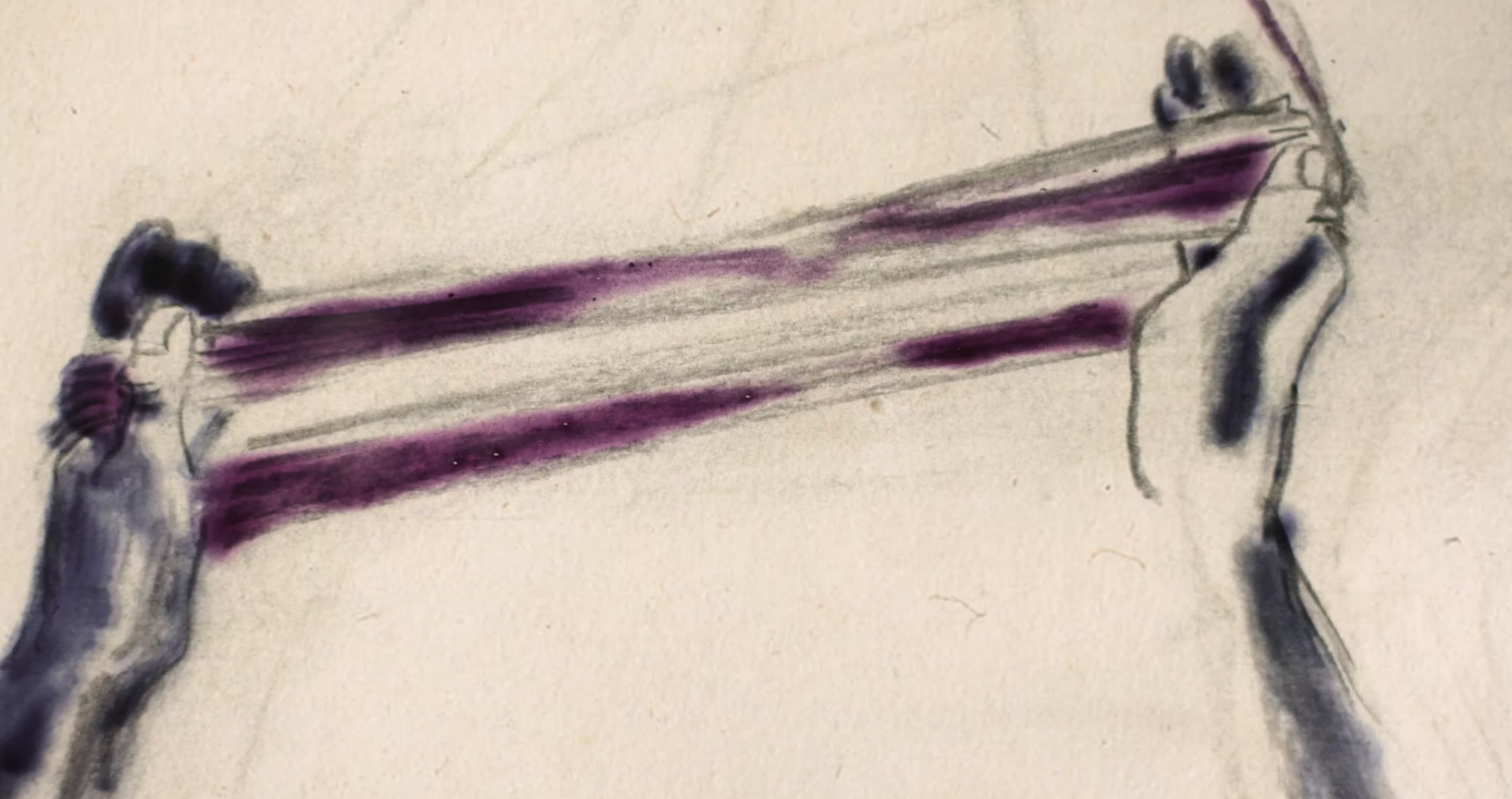 Directed by Concordia alumna Gilnaz Arzpeyma, MASc 12, BFA 21, Fleeting: here & there is a three-minute-long short film. “Mechanical and organic loops morph into each other in an experimental exploration of saturation and breath as a never-ending quest of presence.” The film was also presented at the Annecy International Film Festival, the Montréal Festival du Nouveau Cinéma 2021 and the Ottawa International Animation Festival 2021. It has received honours such as the Best Experimental Animation at the Concordia Film Festival 2021 and a Special Mention for Best Canadian Student Animation OIAF.

Written and directed by Concordia alumna Marie-Noëlle Moreau Robidas, BFA 15, Triangle Noir is a 14-minute-long animated film that takes place during the ice storm that hit Quebec in 1998. It sketches the portrait of a woman and an old man whose precariousness usually remains invisible, but which the crisis situation reveals. 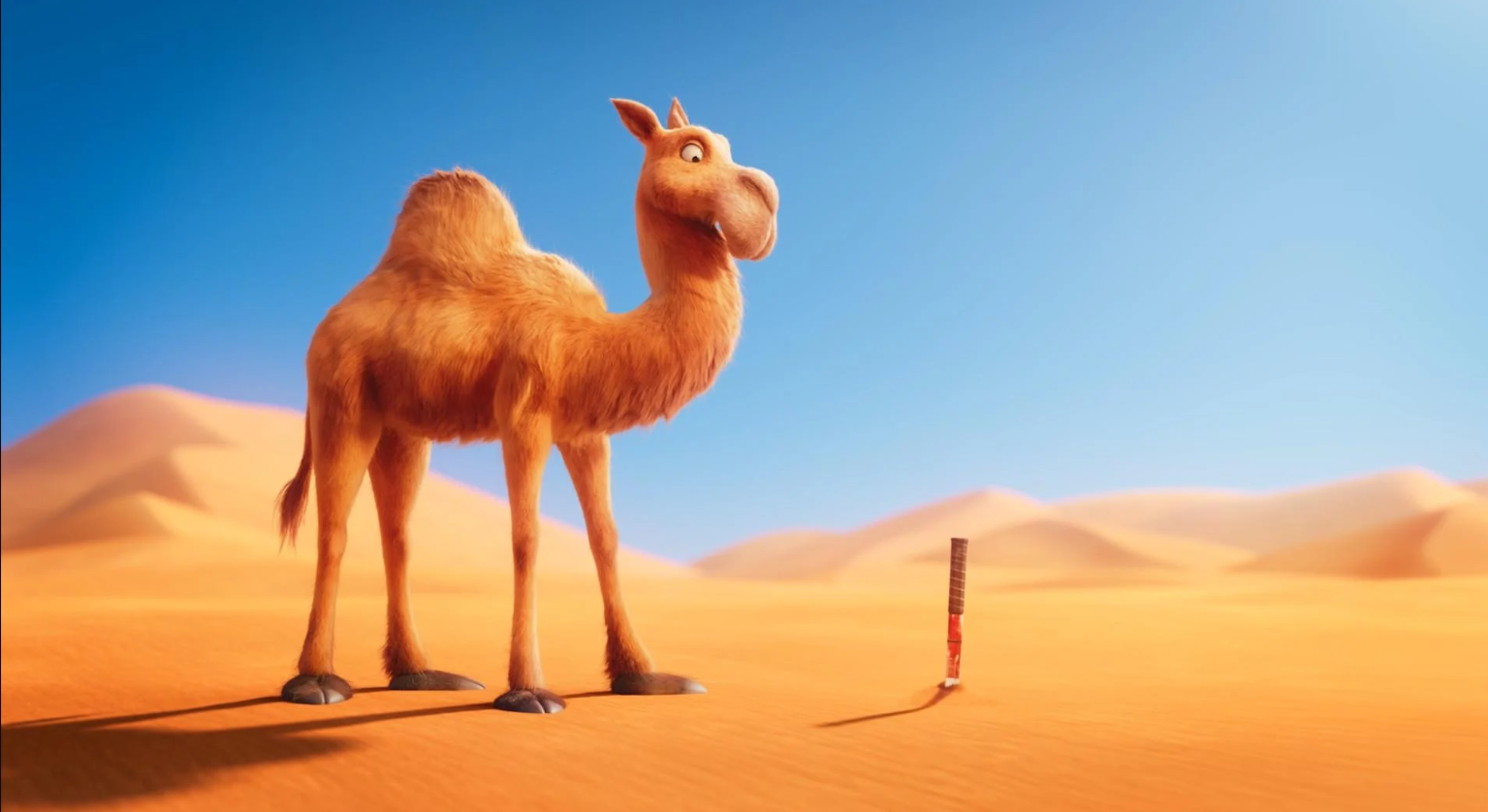 “ITCHY is a simple-minded but charismatic camel whose itchy hump is a constant distraction. As he absent-mindedly wanders through the desert, Itchy is stunned by a tennis ball to the muzzle. Faced with a strangely antagonistic tennis ball machine, Itchy must defend himself in an epic showdown that can only end one way!”

Directed by Anders Beer and Pierre-Hughes Dallaire, the short minute-long animated film was also presented at the Annecy Film Festival and the Regard Festival.

In the Shadows (Dans l'ombre)

In the Shadows tells the story of Mélanie, a newly separated mother who spends a weekend at her mother’s house with her eight-year-old son Tom who is still unaware of his parents’ breakup.

“In the shadows, a creature on the prowl for fresh meat lies in wait, looking for their weak spots in order to lure them into its lair.”

This 13-minute-long short horror/thriller film, directed by Concordia alumnus David Émond-Ferrat, BFA 20, was also presented at the Toronto Independent Film Awards, Regard Festival, Calgary Underground Film Festival and Kino Montreal. It will be available in French with English subtitles. 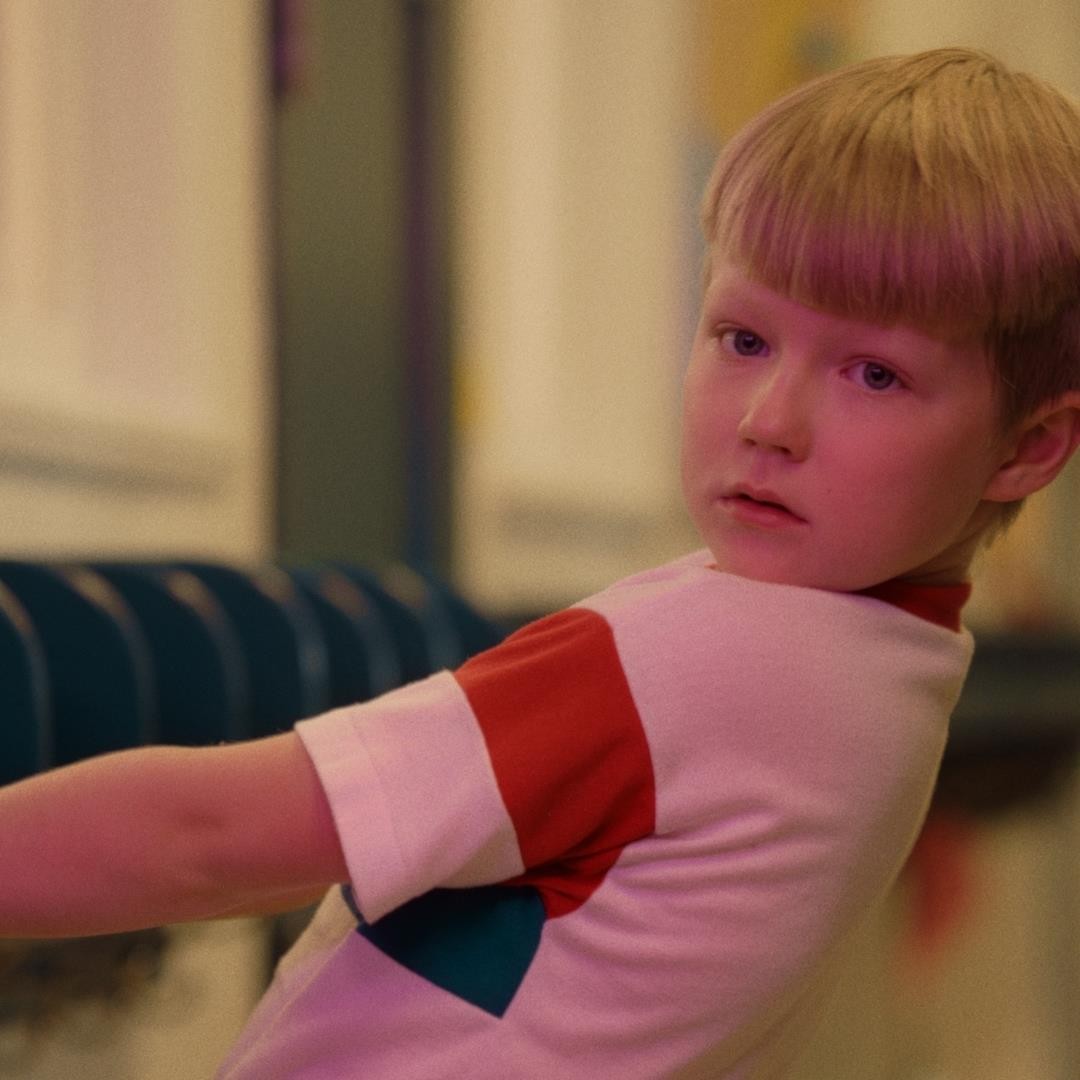 La main gauche is about a young boy named Maxime whose mother starts to worry after hearing that her son is “not normal” from his second-grade teacher. “After a distressing visit to the hospital, she decides to confront the teacher, only to see the whole situation in a new light when the most trivial misunderstanding occurs.”

This 14-minute-long short film, written and directed by Concordia alumnus Maxime Robin, BFA 07, MA 10, is about gender, “especially when it’s projected on others.”