El Mahdi Ziani (1978-2020): ‘His drive, knowledge, professionalism, kindness and friendship will be missed’ 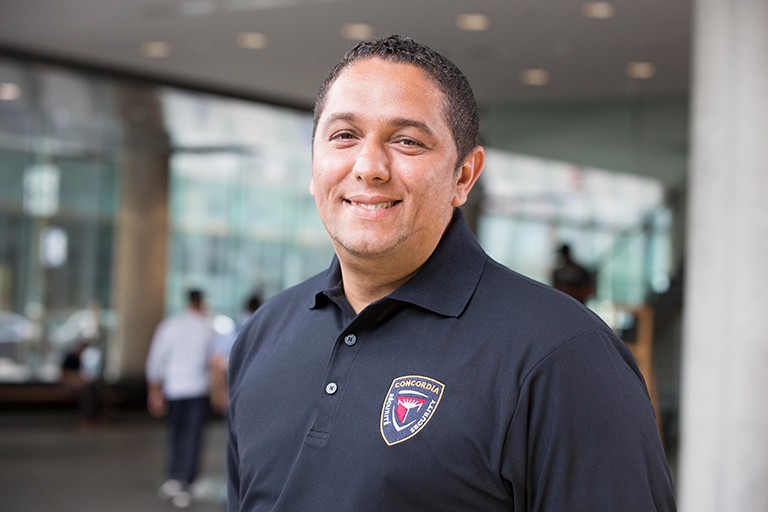 El Mahdi Ziani, a valued member of Concordia’s security services for 14 years, died in Montreal on November 19 after a battle with cancer. Ziani was 42. He leaves a wife and five children.

Ziani began at Concordia security as a shift supervisor in 2006 and advanced to his most recent position, assistant director of support services, in 2019. He was featured among the talented staff in the Services Sector Annual Report 2013-14.

The Moroccan-born Ziani was a resident of Saint-Constant, Quebec. He was an active volunteer outside the university, including for the Liberal Party of Quebec, several local soccer associations and the Moroccan community.

“El Mahdi Ziani was such a devoted man, but left us far too soon,” said Marwah Rizqy, Liberal MNA for the Saint-Laurent riding, in a tribute read at the Quebec National Assembly on November 19.

“Every time he met a young person who sometimes needed guidance, he took care of it no matter where they came from. Dear El Mahdi, know that today at the National Assembly we recognize everything you have done for the community in Montreal, Quebec, Canada and, of course, Morocco. Thank you.”

“Mahdi worked tirelessly, in the background, ensuring that the security department and its personnel were well supported and had the necessary training and procedures to accomplish their duties professionally,” he says.

“He was instrumental in the success of the department yet never sought to appropriate that success for himself, preferring to stay out of the spotlight. Mahdi was my partner and friend, and I knew I could always rely on him, as others could, to provide an honest and thoughtful opinion. His drive, knowledge, professionalism, kindness and friendship will be missed.”

Among other activities, Ziani served as president of the Roussillon Soccer Club and the Saint-Constant Soccer Association. He was also director of Liberal Party candidate Mohammed Barhone’s campaign for the riding of Taillon in the 2018 Quebec election.

“It has been a great privilege and pleasure for me to collaborate with Mahdi,” the mayor of Saint-Constant, Jean-Claude Boyer, said in a statement. “He was a smiling, educated, humble, calm, diplomatic and distinguished man. A committed, available person who has exercised great leadership. He will be sorely missed.”