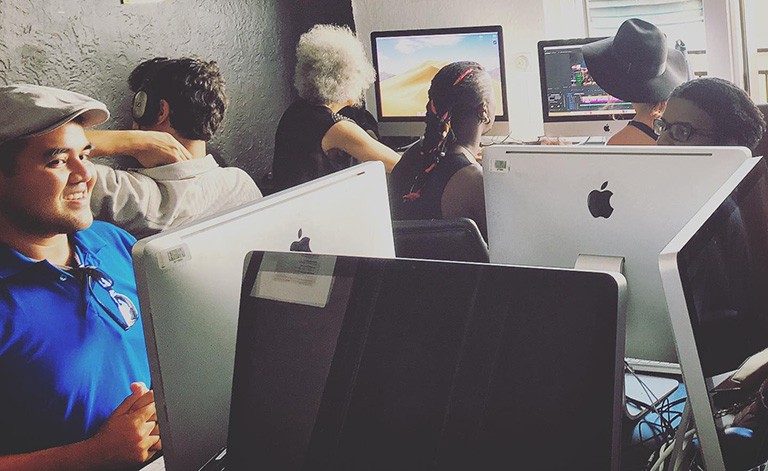 Many in attendance were alumni from the 1980s and 1990s. They were joined by active members of the non-profit group, which today is a multimedia creation hub that provides an open space for students and community members to express their creativity.

The organization has spent the last two years painstakingly archiving 30 years of content from more than 500 old-school videotapes. The theme of the night was appropriately nostalgic, paying ode to the golden age of film.

“It was a huge success,” says Jenny Cunningham, communications coordinator for CUTV. “We all dressed up in old Hollywood glam and were looking stylish throughout the evening.”

The night consisted of archival footage, film viewings, Hollywood trivia games, photo-booth fun and dancing. Cunningham notes that the highlight of the event was a screening of Rocket Jack — a campy 1990s short.

“The quality of the film is horrible, but that’s part of what makes it so endlessly hilarious,” she says. “And it’s such a great example of the opportunity for growth that CUTV offers to people just starting out.”

Half a century of history

CUTV’s history is long and storied, having started in 1969 as TV Sir George at Sir George Williams University, one of Concordia’s founding institutions. The how and why behind the channel’s origin is somewhat of a mystery, with only one archival video making reference to its creation vis-à-vis the dean of students extolling the capabilities of closed-circuit wireless television (CCTV) in the Henry F. Hall Building.

Throughout the 1980s, CUTV was on cable and held a partnership with CFCF, a Montreal-based TV station owned by CTV. The main programs that ran during this era were Future Scope and Art Beat.

Notably, it was during this time that Mutsumi Takahashi, BA 79, MBA 95, LLD 13, now chief news anchor for CTV Montreal News, joined CUTV and started her career there.

The 1990s ushered in a decade of change and a departure from cable TV, shifting to low-budget shows produced in the organization’s studio. However, the only place they could be broadcast was on the Hall Building’s CCTV. Interestingly, during this time, CUTV entered the pages of the Guinness Book of World Records for the longest continuous broadcast under one director, for an HIV/AIDS research telethon in 1992.

In the 2000s, CUTV first began lending equipment after acquiring several Mini DV cameras, giving members more freedom to go out in the field to create original content. The new millennium also marked a move for the organization, from the Hall Building seventh floor to 2110 Mackay St.

It also saw a renewed focus on becoming more community-minded and member-driven. During the Maple Spring of 2012, CUTV became heavily intertwined with the student movement, live streaming hours of protests, as well as delivering several news segments per week throughout the strike.

“Technology has advanced, media consumption habits have evolved and station mandates have shifted. But the one thing that has remained consistent is the dedication from passionate volunteers who keep the organization afloat through thick and thin.”

From channel to creation collective

Today CUTV acts as a media production collective, where community members can access a vast array of services, from professional equipment to a state-of-the-art editing suite, sound recording room, free workshops and more.

“We provide a space for members to run free with their projects, offering assistance in any way we can,” Mann explains.

Today, CUTV has significantly more members and equipment than ever before.

“It is very heartwarming to know so many people choose to come here even when they don’t necessarily have a project on the go,” Mann adds.

“CUTV has become such a unique place for students and young professionals to network, get involved, befriend like-minded people and build off of one another’s creativity.”

What’s on the horizon for CUTV?

This week CUTV held its annual general meeting, at which 2019 accomplishments were discussed alongside ideas for the new year.

“It was an opportunity for members to get involved in the community and have their voices heard, or even run for a seat on our board of directors,” Cunningham says.

CUTV will also be holding its second annual film festival at the beginning of April and is actively looking for curators and submissions.

“Providing this platform for our members to use as a springboard into the festival  circuit is a great way to gain exposure to the film world,” Cunningham notes.

“It is also so fulfilling to see our members’ work on the big screen. It feels great to be able to provide an opportunity for them to exhibit their projects.”

Have a video project you want to get off the ground? Reach out to CUTV today!