What it takes to make a ‘pop-up’ building

On Friday, October 4, all that passers-by could see in the lot at 1535 De Maisonneuve Boulevard West were dozens of metal supports. By the following Monday, they found an entire building — albeit an unfinished one — made up of modular units.

Installation of the missing elements is now nearly complete. The building includes exterior cladding, ventilation, plumbing and wiring. Windows, interior walls — and even toilets — were in place upon delivery.

The planning of the building included details new to both the university and its partners in the project.

“We had to work with sections that were 42 feet long, by 11 and a half feet tall, by 15 feet wide. One reason was the constraint of transporting anything much bigger along highways and under bridges,” Magne adds.

Time was another important factor. A ramping up of renovation work on the Henry F. Hall Building meant the university needed new classroom space fast — by January 2020.

Claude Lazzam is senior project manager for Colliers Project Leaders, the firm contracted by Concordia to help manage some of the university’s more complex construction projects, including the Applied Science Hub.

“In February 2019, we sat down with Concordia project manager David D’Arcangelo and Kirsten Sutherland, senior director of project management. Our goal was to assemble the best possible team quickly. Excellent planning was key,” Lazzam says. 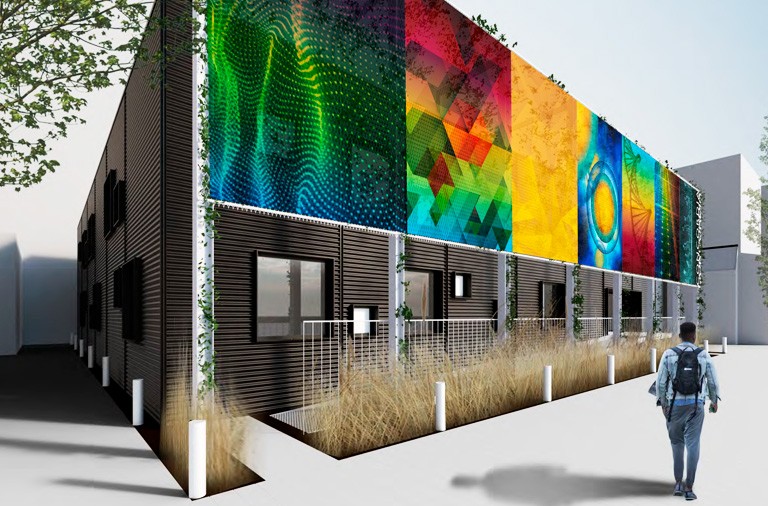 Five years in one place

2020 is just around the corner and the Learning Square is nearly ready to open its doors — the fastest classroom construction Concordia has ever seen.

A special zoning permit, issued by the city, will allow it to operate for five years in its current location. During that time, it will serve all faculties that need the space with modern facilities and the university’s largest gender-neutral washroom so far.

For the lead architect, there are a number of reasons to build something nomadic, including cost, longer-term planning and reusability of the space.

“There’s a sustainability aspect to being able to move and reuse the building. Concordia might need it at another location during future renovation work. Or, it could sell the building to a school or other educational institution,” Magne says.

Although he typically designs permanent structures, including the Grey Nuns Reading Room, Magne says he has long had an interest in the use of modular construction, notably in northern climates.

“Though the Learning Square is the first one that I helped build, I actually did my thesis on modular construction. I can tell you that we are a long way from the pejorative understanding of modular buildings. We’re now even seeing them used in the construction of hotels and condos,” he says.

How would he compare adapting a heritage space like the Grey Nuns Chapel to the task of erecting a temporary building?

“In one sense, they are diametrically opposed. The first is historical and finite. The other is modern and adaptable,” Magne says.

“However, their vocation is very similar. They both need to provide space for learning, adapt to technical needs of today and provide students with good lighting conditions and comfort. And, interestingly, they serve the same students.”

Good planning is key in all construction, yet both Magne and Lazzam agree that it is particularly important in the case of a modular building, where execution is accelerated and changes are limited once out of the factory.

“We also needed to learn about what the market could deliver. The university has strict standards for determining whether a space is suitable for a class,” Lazzam says. “And we knew that aesthetics were important, not only for Concordia but also for the City of Montreal. The building would need to blend into the rest of Sir George Williams Campus.”

The Learning Square was also designed taking into consideration the location: an old parking lot that may one day be transformed into a new, permanent structure.

“For a normal building, we would have needed to dig a foundation and build more floors. For a temporary structure, we learned that building on piles was the least disruptive and quickest way to deliver the spaces that the university needs now,” Lazzam says.

Given all the planning details, he appreciated input from RCM Group, the company that built the modular elements. That was done in a factory in Quebec’s Beauce region before being shipped to a Montreal neighbourhood.

“RCM had the idea of storing the modulars in a lot in Griffintown until the site was ready. That was an important piece of the puzzle because we had a very tight window to install the units,” Lazzam explains.

“We had one weekend to get it all done due to regulations on the use of cranes downtown. We were also at the mercy of weather. It had to be dry. So on the morning of October 5, we got the trucks on the road at the crack of dawn, rolling like clockwork until each piece was in place, ready for the finishing work that is now also nearly done.”

Those interested in learning more about the process of planning and building the Learning Square can reach out to Facilities Management.