NOV. 20: The Stingers face Guelph in the opening round at 6 p.m.
|
By Recreation and Athletics 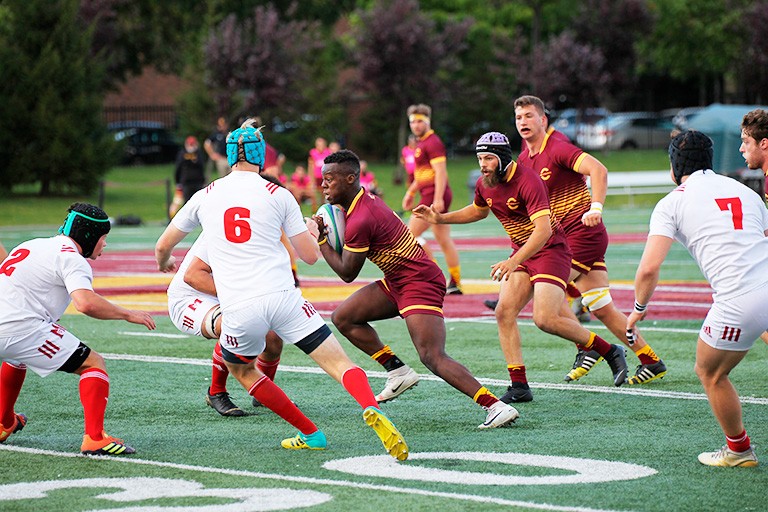 It marks the first time the national tournament takes place in Quebec. The Stingers, who are ranked fourth in the eight-team championship, are playing the last game of the day (6 p.m.) against the No. 5-ranked Guelph Gryphons.

“We’re extremely excited,” said Concordia captain Jackson Marquardt. “We’ve had a really good season and we’re excited to show the rest of Canada what we’re made of.”

The Stingers had a perfect 6-0 won-loss record in the regular season and rolled through the RSEQ conference playoffs, defeating the Montréal Carabins 47-8 in the semifinals and McGill University 38-19 in the Quebec championship.

Guelph finished with a 5-1 record in the OUA West conference and were finalists in the Ontario championship. The Gryphons lost the final 27-18 to the Queen’s Gaels.

Concordia and Guelph met in the 2018 national championship in Victoria. The Stingers came out on top with a 19-5 victory.

The national championship brings together some of the best young rugby players in the country. Joining Concordia and Guelph at the tournament this week are: Queen’s, McGill, the Brock Badgers, the UNB Ironmen, the UBC Thunderbirds and the Victoria Vikes.

“I think it’s a great opportunity for us to show the level of talent in Quebec,” Marquardt said. “Fans who come check out the event are going to see some great young players and be able to see the future of Canadian rugby.”

This also marks the first time the Stingers have hosted a university national championship in 20 years. Concordia was the site of the 1999-2000 women’s hockey championships. That year the Stingers won the bronze medal.

Find out more about the Concordia Stingers or visit the ticket page.