As they embark on their life paths, more than 6,000 spring graduates are encouraged to be proud of their achievements and make the world a better place
|
By Howard Bokser, Daniel Bartlett, Tom Peacock 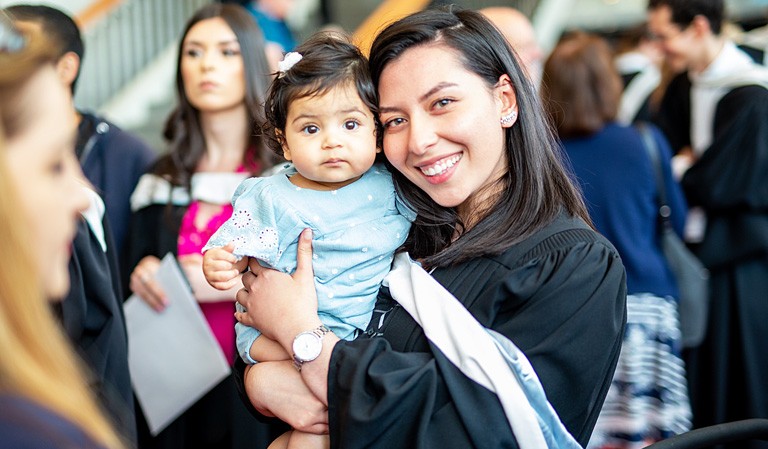 That recognition came during the convocation ceremonies at Montreal’s Place des Arts on June 10, 11 and 12.

This year’s ceremonies were especially memorable for Shepard, since they were his final ones as the university’s president. “Like most of you, I’m now a Concordia graduate who’s moving on to new pursuits,” he said, after being introduced by Chancellor Jonathan Wener (BComm 71).

“As we celebrate your personal achievements, it’s important to remember that today is about the bigger picture. Your own education from kindergarten to an undergraduate or graduate degree is also an investment in the greater social fabric in making our community stronger, and the world needs you.”

For the support he received during his seven-year tenure, Shepard thanked members of the university’s Board of Governors, faculty and staff — and students.

“Every day I was inspired by our raison d’être: you, our students and our graduates. Your creativity, your energy, your dedication to making the world a better place — I hope you’ll carry that spirit with you as you carry Concordia’s mission of making a difference in the world,” he said.

“Education continues to be a powerful antidote to the world’s problems. Education builds understanding and binds us together. Education makes hope possible.”

Bernard Cloutier, who earned a BCSc in Computer Science and Software Engineering, reminded his classmates that while “farewells can be a time of sadness, they can also be hopeful. It’s imperative to look at what we have achieved and be proud.”

Cloutier recalled his first day at Concordia. As a francophone who didn’t fully grasp a new language and its acronyms, he asked a fellow student, “Where can I find room TBD?”

“The student smiled and kindly told me that ‘TBD’ meant ‘to be determined,’ and showed me where to find my classroom. I was struck that a complete stranger would take the time to help me, and at that moment I knew that I had stumbled into a unique place.”

Cloutier passed along the message that “community is what we’re celebrating today. You, the Concordia community. I would have never imagined that such a vibrant, smart and open group of people could exist,” he said.

“I saw student societies redefine what words like ‘hard work’ and ‘dedication’ mean; I saw HackConcordia organize the second largest hackathon in the history of Canada; and I saw Women in Engineering doing amazing work around inclusivity and gender equality, and remind us that women were and always will be paramount in the field of engineering.”

Borrowing a line from the TV series The Office, Cloutier ended by adding, “As much as no one here is wearing a hat, may your hats fly as high as your dreams.”

Highlights from the honorary doctorates’ addresses

Aimee Mullins, a double amputee, record-breaking athlete, prolific actor, high-profile model and inspirational speaker, encouraged the Faculty of Arts and Science graduates to never lose sight of their curiosity, to connect to others and to create a bit of chaos.

“Take back your free time for daydreaming. Daydreaming nurtures natural curiosity and a capacity for reinvention. If you can’t hear yourself, you can’t know yourself,” Mullins said.

“Spend time with your friends and family, in person. Talk, listen, laugh, make eye contact, ask questions. Real listening, truly connecting with someone so that they feel heard and seen, is one of the greatest human kindnesses.

“Allow for a little chaos and non-conformity. Go out of your way. Seek things out you disagree with. Try something new at least once a week. Ask a human stranger for directions — or where the best poutine is.”

Hockey star Caroline Ouellette recounted to members of the graduating class how her playing career had evolved over the 16 years she was on Team Canada. She filled a different role on each of the four Olympic gold-medal teams she played for.

“Was it easy? Not at all,” she said. “But I chose to embrace each one for the betterment of my team.

“I wasn’t going to get any faster, but I could find new ways to improve as a leader. I could bring a positive attitude and a relentless work ethic that forced people around me to elevate their game.”

Ouellette implored the graduates to embrace different roles and make opportunities for themselves. “If you want your dream job to come true, find a way to make yourself instrumental to others.”

Honorary doctorate recipient Sylvia Schmelkes encouraged the 2019 graduating class to believe in the people who surround them. “Sometimes people disappoint us, but it is better to be disappointed than to lose the opportunity of learning from others and gaining their friendship,” she said.

Her other words of advice: have a reason for doing things; do things that have a positive impact; do things for others; be aware of your environment, your country and your planet; and always think of others who are at a greater disadvantage.

“Consider your privileges and strive for social justice and the distribution of opportunities,” she told the graduates.

“You are going into the world well-armed with capacities and values, which I know you will put to work for the good of humankind. You are entering your profession with energy and enthusiasm which I hope you never lose.”

Kamaljit Bawa, distinguished professor of biology at the University of Massachusetts, Boston, assured the convocating students, “This great university has prepared you well for the challenges ahead.”

When he graduated from university six decades ago, “Poverty, malnutrition and illiteracy were rampant across the globe. During the last 60 years, the world has made tremendous progress. However, this progress has come at a very heavy cost to our planet,” Bawa said.

“You represent the generation that has the power and tools to make the changes that will assure our planet’s future. You have the opportunity to restore and repair our entire planet.

“And in doing so, you will have the authority and passion to show the ways for creating a more just and humane society and sustainable world. What could be a more noble goal or pressing challenge?”

Peter Simons, president and CEO of La Maison Simons, expressed his pride in joining the Concordia family. He encouraged the JMSB graduates and their families to feel proud, too.

“Today symbolizes the conclusion of years of effort, and you have turned opportunity and hard work into success. Now, life gets really interesting,” he said.

“As philosopher Allan Bloom wrote, ‘The richest community is that of men who seek to know the truth.’ As leaders, I hope that you will choose to join that community. And perhaps among you are the sparks of a second Age of Enlightenment, an Age of Enlightenment that would think about how to confront the challenges — environmental, social inequality — of our time.

“Seek the truth. Cultivating the ability to admit your errors will be a key to changing in the future.”

In his address, Louis Vachon offered several lessons he’s learned throughout his three decades in the business world. The president and CEO of the National Bank of Canada started by sharing the same advice he gives to his employees.

“The only thing I can promise you — and I know perfectly well that I will uphold my promise — is more change,” he said.

“I’ve continued to evolve as a professional because I read a lot. If you don’t read, there are audiobooks, videos, conferences — you can learn from other people — but never stop learning. Don’t become a 40-year-old dinosaur.”

Vachon also encouraged those in attendance to live their passions and have fun with their careers.

“Greater professional choice may be the only advantage you have over past generations. Make sure you use that advantage.”

Éric Martel, president and CEO of Hydro-Québec, let the graduating students of the Gina School of Engineering and Computer Science that they should be proud of being part of the Quebec engineering community, which is world renowned.

Martel passed along a few pieces of advice to the new graduates:

“Be yourself. Don’t try be something you’re not. Every day you need to say, this is my dream, this is what I want.

“Be positive. Like I always say — as CEO of Hydro Quebec — you need to create energy around yourself.

“Have role models, people that will inspire you.

“Follow your instinct. When opportunity comes to your door, do not overthink it. Grasp it. I’m sure you won’t regret it.”

For more than 20 years, honorary doctorate recipient Natalie Panek has been on a mission to become an astronaut. Sticking to her quest has required courage, conviction and confidence, she said. But after an experience during a hiking trip on the Inca Trail, she also realized she needed to add compassion to the mix.

“I didn’t want to be chasing this dream of travelling to space, becoming an astronaut, if it meant that I was so narrowly focused on myself and only myself,” she told the graduates.

“We can be ambitious and yet still take time to give back and help others.”

The aerospace engineer and explorer realized she was in a very good position to help others chasing similar dreams.

“This is so important in science, technology, engineering and math, to have those role models, those mentors, those sponsors, and people who will help lift each other up, particularly for young women and minorities, where there can often be obstacles that have no business being obstacles.”

Quebec sculptor and contemporary artist Gilles Mihalcean had a special request during his convocation address to the Faculty of Fine Arts. He told the graduating class that he could only take partial credit for his honorary doctorate and asked Concordia Chancellor Jonathan Wener if he could share the distinction with one of his sculptures, Tête d’enfant.

Mihalcean then revealed a miniature hood he made for the ceremony and bestowed it on the artwork.

“She played the largest part and that merits the honour I’m receiving today,” he said.

“Tête d’enfant has the ability to show us with eloquence, strength and energy its ability to integrate the ancient into the contemporary.”

Mihalcean told the audience of graduates, family members and friends that creating a transcendent sculpture is the most extraordinary thing that can happen to an artist because it says everything and nothing at the same time.

“Making art is child’s play — it is based around your capacity to let your child’s heart live.”

American conductor Kent Nagano was recognized for his years of artistry and outreach as the music director of the Orchestre symphonique de Montréal. He received his degree from Concordia during a special ceremony earlier.