Graham Carr: ‘This marks an important commitment to our future’
|
By Theresa Knowles 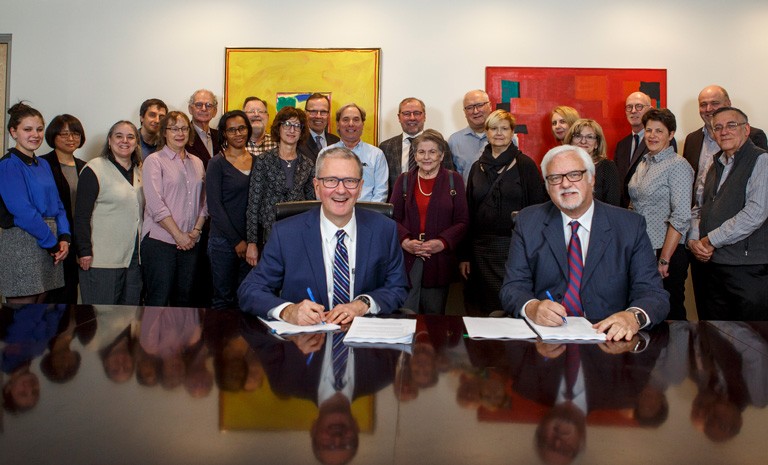 The Concordia University Faculty Association (CUFA) and the university bargaining teams met to sign their new collective agreement on April 15.

“I’m pleased with the outcome of the negotiations,” says Graham Carr, provost and vice-president, Academic. “There was common ground on many topics, which allowed the bargaining teams to focus on how best to address issues where there was more divergence.”

Ian Rakita, president of CUFA, reflects on the hard work it takes to negotiate a collective agreement.

“Thanks go out to both bargaining teams for hundreds of hours of work throughout this year-long process,” he says.

He adds that he’s proud of the work of both parties and believes it is an essential long-term investment in the university.

“We are all working toward making Concordia the best institution possible. This agreement is a testament to how well we work together in an effort to make that happen.”

“We rely on our full-time faculty to be leaders in delivering the teaching, training, research and creative and service activities that are core to the university’s mission, and which increasingly reflect Concordia’s ambition to be a next-generation university,” he says.

“This agreement demonstrates the strength of our working relationship and marks an important commitment to the university’s future.”

The collective agreement will be posted on the Concordia Human Resources labour agreements web page shortly.