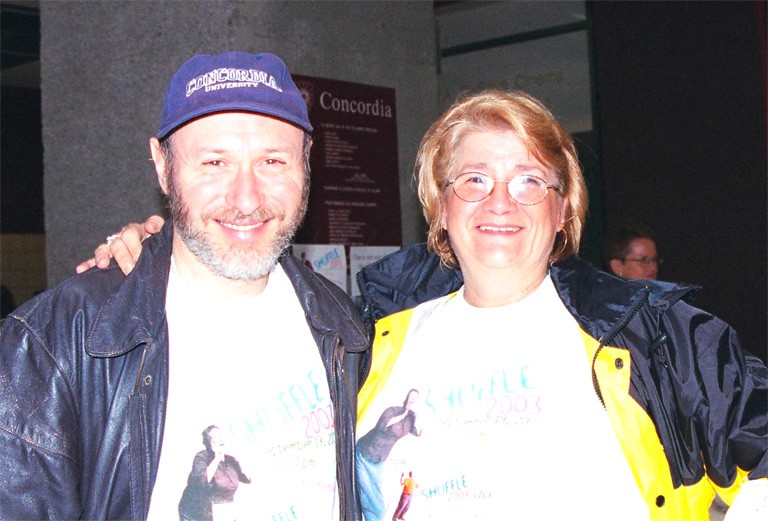 Lise Tavares (right) with Murray Sang, then director of Continuing Education, at the Shuffle kick-off in 2003.

Concordia has lost a valued member of its community. Lise Tavares passed away on December 28, 2018 at the age of 71.

Tavares was the face of the Information Desk in the Henry F. Hall (H) Building for three decades, answering every conceivable question from thousands of students each week. She retired in 2012.

"She always made sure each and every one who stopped by that desk — nervous about being new at a university, terrified about having to deal with a new city or language, apprehensive about a course or program — felt welcomed at Concordia. She was the epitome of the ideal frontline person."

In her role, Tavares coordinated all the cancelled classes when they were colour-coded slips of paper taped to the Information Desk door.

She was also responsible for all of the university's event listings, receiving them by fax and transposing them herself. In September 2001, she was part of the team that launched the online event calendar that still lives at concordia.ca/events today. 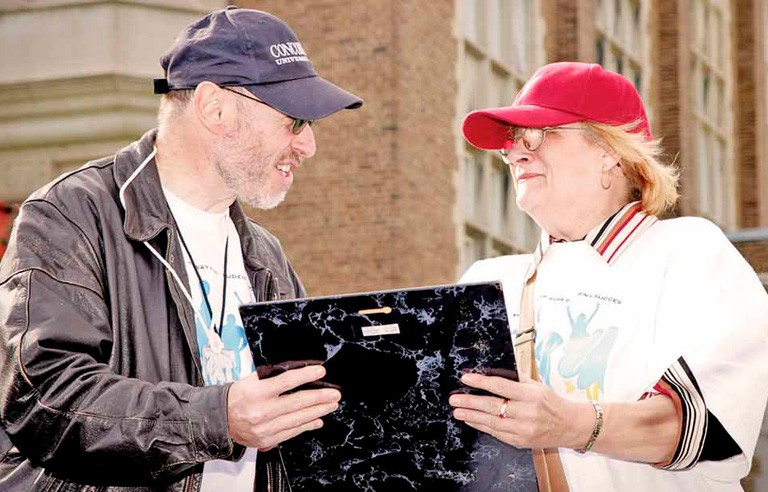 Lise receives the Shuffler of the Year Award from committee chair Murray Sang in 2005. | Photo by John Londono

‘It’s rare to see that level of commitment’

"She genuinely loved interacting with students. In the old days she was the main point of contact for people finding their way around campus," recalls retired university spokesperson Chris Mota.

"I can't imagine anyone who cared for the students more than she did. And there were lots who did. But she would bust through walls and plough through snowstorms to help a student,” he says.

"It's rare to see the level of commitment that she embodied."

Tavares’s popularity and strong reputation were based on her unbridled generosity.

Since 1989, she organized an annual food drive to benefit local homeless shelters, as well as Concordia's Student Emergency and Food Fund. For the first decade, she used her influence in the community to have the donations delivered by the local station of the Service de police de la Ville de Montréal, but she eventually convinced Pat Pietromonaco (then manager of Distribution Services) to take over.

An indefatigable supporter of the Concordia Shuffle, Tavares helped organize the fundraising event for years. She was most often found sitting on the tailgate of a Facilities Management pickup truck handing out bottled water to all the Shufflers along the route. When, in 2005, she was announced the winner of the Shuffle Spirit Award, she wasn't there to receive her award. Tavares later said, "When my name was announced I was still somewhere along the route handing out water.”

A visitation will be held Saturday, January 12, from 1 to 3 p.m. at the Complexe funéraire T. Sansregret (4419 Beaubien St. E.), followed by a short ceremony.