Convocation 2018: ‘Concordia will always be part of who you are’ 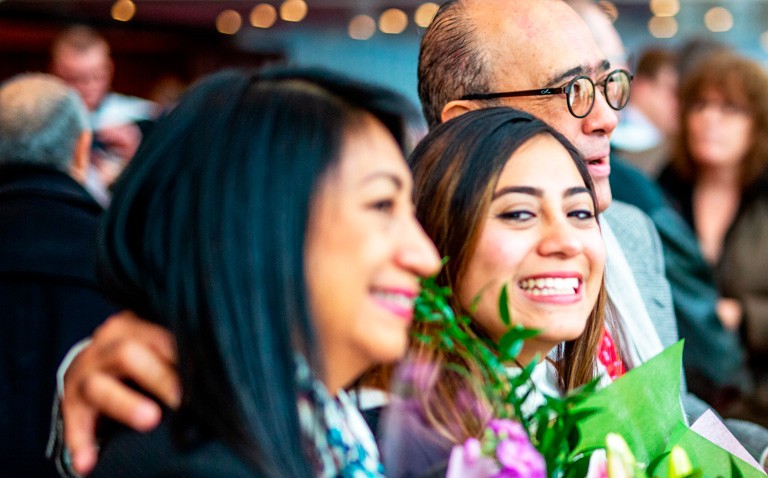 “As hard as you’ve worked to get here, your education is not over. It will go on as the pace of our knowledge society accelerates,” said Shepard, who joined distinguished honorands and valedictorians in offering his best wishes to the class of 2018.

“Concordia will always be part of who you are," he added.

"As we celebrate your achievement today, it’s important to take stock and think about the bigger picture. Your university education is an investment in our community’s greater social fabric. The world needs you.”

Damiens, who completed his PhD in Film and Moving Image Studies, said that when he first found out he was to be valedictorian he was happy, but then another, darker feeling set in.

“I experienced raw emotion: first pride, but almost immediately after, fear. It’s a type of fear many of us have experienced, that of an imposter,” he recalled, noting that he began to doubt his accomplishments.

Wahab, who received his PhD in Information and Systems Engineering, related.

“I’ve personally experienced imposter syndrome many times in my life. In fact, every time I encountered a new challenge I felt reluctant to accept it because I doubted myself.”

Wahab described how when one of his professors offered to supervise his master’s six years ago, he was hesitant because he didn’t believe he had what it took to be an effective researcher. And even after he found success as a researcher, he then felt daunted when asked to teach.

“I freaked out. I was uncertain about my teaching skills, but I accepted the challenge anyway and when I started teaching I fell in love with the experience,” recounted Wahab, who will be joining the Université du Québec en Outaouais as a new faculty member in January.

Damiens and Wahab concluded their addresses by imploring graduates to act on their desires despite their insecurities.

Concordia awarded honorary doctorates to five distinguished individuals, including a pioneering artist, a philanthropist and three nationally recognized business leaders. The ceremonies at Salle Wilfrid-Pelletier in Place des Arts were divided by faculty.

Miriam Roland addressed the Faculty of Arts and Science

When psychotherapist, communitarian and philanthropist Miriam Roland graduated from Stanford in 1951, there was little room for women scholars in professional and academic circles. So, she made her mark in the community by volunteering for statewide study groups that reported on the safety of nuclear power plants and examined how history texts depicted women and minorities. Roland recalled marching for civil rights, protesting the Vietnam War and being witness to the first big Pride parade in San Francisco.

“I knew that my acts as an individual would not make an impact, but there is power in numbers. It was uplifting for me to be with people who were deciding and working to make a change. Dissatisfaction is a great motivator.”

“As graduates, you are looking forward to an unpredictable future. A look back, however, may encourage you to continue making progress,” she said. “Take your energy to change this wondrous world to enable people to live better lives. Don’t be complacent.”

Luigi Liberatore and Louis A. Tanguay addressed the John Molson School of Business

Luigi Liberatore, a successful real estate developer and venture capital investor, told graduates the best way to remain fulfilled in life is to strike a balance between success and contributing to society.

“Your objectives must be loyal to the cause of human beings. Human beings are the most important resource on earth,” he said, imploring graduates to see their education as a tool for change.

“The shortest distance between two points is a straight line. Prepare your projects: have a starting point and end point in mind. Be prudent but follow that path,” Liberatore added.

“However, remember success is only truly worthwhile if it help builds characters and societies positively.”

Louis A. Tanguay, who enjoyed a successful four decades–long career at Bell Canada, asked the audience to take a moment to consider the concentration of knowledge present in the hall.

“Fast forward 30 years, and think about how the application of this knowledge will impact society. Members of this class will be business leaders, entrepreneurs and professionals, providing thousands of jobs and growing the economy,” said Tanguay, adding that by combining this knowledge with perseverance and preparation, graduates were sure to succeed.

“This is a magic moment full of promise for the future.”

President of ABB Canada, Nathalie Pilon has made a career out of her passions for people, technology and sustainability. She urged the future engineers and computer scientists in the Class of 2018 to drive innnovations in energy and Industry 4.0.

“Your passion, skills and education are coming to fruition at a time when two historic economic and technological revolutions are changing the world. You are in a position to impact these revolutions in a positive way,” she told graduates.

“Solving the global challenges of the physical word matters. Or to put it more simply, matter matters.”

Meredith Monk, a celebrated multidisciplinary artist and pioneer of what is now called “extended vocal technique” and “interdisciplinary performance” told Concordia's Class of 2018 in the Faculty of Fine Arts that above all else, they must be true to themselves.

“I hope through the din of information constantly bombarding you, you find the time and patience to listen to your deepest self. There is only one of you in the universe, one of you existing in the past, present and future,” said Monk.

“Part of your purpose on this earth is to find your voice and to share that voice with your community and the planet.”